The biggest winner from the U.S. government shutdown and near credit default may be China as it pushes for a “de-Americanized” world economy, a future on display in a dazzling Shanghai, writes Beverly Deepe Keever from Shanghai.

Shanghai was a grim city when I first visited here a half century ago. Without electricity the wharf-side buildings were dark after twilight except for the flashing red star atop the Soviet-built Palace of Culture.

As a 26-year-old freelance writer with a wanderlust to fulfill childhood yearnings, I was not permitted to leave the Polish freighter that carried me to Shanghai in 1961, just a dozen years after Mao Tse-Tung and his communist-led army liberated the world’s most populous country and a decade before President Richard Nixon began to establish diplomatic relations. 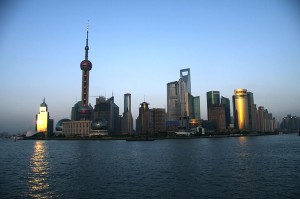 The skyline of Shanghai, China in 2009. [Photo credit: Carl LovÃ©n on Flickr]

Although China was closed to Americans when I visited, from my porthole I saw dilapidated trucks and tractors unloading our cargo and heard the Polish crew and visiting diplomats tell of near-starvation in the drought-stricken northern sections of the country.

Before Mao’s takeover, “Shanghai was a second Paris,” a Polish sailor said, complaining, “Now no dancing, no bars, only Seaman’s House for a little whiskey and vodka.”

But 52 years after my first visit, I am overwhelmed at the dazzling changes that have transformed China’s most populous city of about 23 million. Shanghai today seems to epitomize China’s vaunted dream of rejuvenation that is slated to be fine-tuned when the 200-member Central Committee of the Communist Party meets in Beijing from Nov. 9 to Nov. 11.

Gone are the half dozen Soviet jets that buzzed overhead as my Polish 10-ton cargo-liner moved past the mouth of the roaring Yangtze and glided up the Huangpu River; they are now supplanted by commercial airliners headed to Shanghai’s terminals so ultramodern they are featured in Western newspapers.

Gone too are the two dozen U.S.-made destroyers, landing craft and minesweepers left behind when Chiang Kai-shek departed 12 years earlier for Taiwan. And gone are the junks that prompted the Polish radio operator to exclaim, “These are boats used from before Christ, used for 2,000 years.”

These relics of a bygone era are now replaced by barges carrying construction materials for a $4.4 billion Walt Disney Co. theme park and resort slated to open in 2015 and by double-decker sightseeing cruises that are festooned with nighttime neon lights, thus serving as moving advertisements. Shanghai, now the world’s largest container port, is gearing up to surpass Hong Kong in international shipping.

Obscured too is the Soviet’s flashing red star and Palace of Culture. It is lost amid the European-styled, colonial-era buildings for financial institutions strutting along the world-famous Bund that Western powers built and dominated until Mao’s victory; the buildings are now protected and refurbished as working museum pieces to lure tourists.

The most astonishing transformation, however, has sprung up across the river from the Bund in Pudong. As my Polish freighter glided upstream for more than an hour in 1961, I saw marshland dotted with four cows grazing amidst elongated pyramids of hay. That marshland endured until Pudong was tabbed in the 1990s for immense government investment.

In the last two decades, dozens of sky-hugging towers have sprung up like China’s mythological phoenix that symbolizes power, peace, prosperity and happiness as Shanghai displays its aim to become a global center of finance and commerce.

The 100 floors of the silvery Shanghai World Financial Center are topped off by a dizzying observation platform. But next year even that will be surpassed by the nearby Shanghai Tower, now swaddled in green gauze to capture falling materials as its four-tenths-of-a-mile-high pillar nears completion to make it China’s tallest building.

In effect, Shanghai was moving toward “de-Americanization” even before last month’s U.S. government shutdown and near credit default when the official Xinhua news agency commentary called for a de-Americanized world and a shift away from the U.S. dollar as the global reserve currency.

The communist leadership has been edging toward more freedoms for Chinese citizens, with Wi-Fi cafes and monitored Internet chat rooms, hoping to offset social instability as the gap widens between the haves and the have-nots and as college graduates seek scarce better-paying jobs.

But commercial photographer David Barlow, after working in Shanghai for three years, observes that the government has given people what they want most: “financial freedom.”  Shanghai is a mecca for money, he explains: “People crave it. People die for it. In Shanghai, if you don’t have money, you are nobody.”

He describes Shanghai as the most dynamic city in Asia and he has photographed a half dozen of its capitals. Shanghai has an addictive quality, he adds: “it keeps you here even when you don’t want to be.”

But that addictive quality of progress and commerce has its downside. Air pollution is so thick that even from atop Shanghai’s highest skyscrapers, the smog often blocks the view of all but the closest buildings.

Barlow recounts his assignment to capture panoramic images of the city’s breathtaking financial district skyline just when dawn broke behind it. Trudging there at 4:30 every morning, he explains, “it took me three months to capture that skyline without a mixture of haze caused by smog and pollution.”

Respiratory ailments are commonplace. Air pollution was recently officially named as the cause of lung cancers in an 8-year-old girl living in an industrial zone ringing Shanghai.

In addition, sex-selling by gays and both genders, prostitution that Mao had stamped out, has re-appeared in the Shanghai’s underworld once dubbed “The Whore of Asia.”

After my Shanghai visit 52 years ago, I ended my article with a prediction that a young Chinese made to me: “You will find other countries with a better standard of living, but you won’t find a more high-spirited working people. Our people are working hard to make our country rich and strong. Time will tell the fact.”

Now, that prediction is unfolding with Shanghai’s dynamic development, propelled by heavy state investment and direction.

In another two generations, de-Americanization may be self-evident, old Asian hands predict, as they view from afar the crumbling of the U.S. image after last month’s government shutdown and near-credit-default debacle.

If current trends continue, it seems certain that by mid-century the global economy will no longer be pegged to the value of the U.S. dollar but to China’s renminbi.

Beverly Deepe Keever is the author of Death Zones and Darling Spies: Seven Years of Vietnam War Reporting. This article was financed in part by the Carol Burnett Fund for Responsible Journalism at the University of Hawai’i and by the Peking University Educational Foundation.

15 comments for “The Future in a Dazzling Shanghai”