The current crisis of American democracy centers on the craziness that has engulfed the Republican Party, once considered home of the responsible “adults” but now more like an island controlled by nasty and destructive adolescents, as Beverly Bandler explains.

“No America without democracy, no democracy without politics, no politics without parties, no parties without compromise and moderation.” With these memorable words political scientist Clinton Rossiter began his classic text, Parties and Politics in America in 1960.

Journalist John B. Judis reminds us that Rossiter saw U.S. parties as “creatures of compromise, coalitions of interest in which principle is muted and often even silenced.” For Rossiter and several generations of political scientists, writes Judis: “this was the genius of America’s party system. It was what made it possible for the United States, in contrast to Europe or Latin America, where parties tended to be ideologically pure, to endure the wrenching change of war or depression without violence and revolution.” 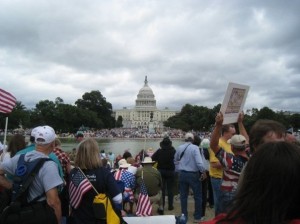 Today’s Republican Party, which suffers from terminal Cold War nostalgia among other destructive maladies, is being run by the Tea Party movement, which has created, according to historian of ideas Mark Lilla, a new political type: anti-political Jacobins. The Tea Partiers and their right-wing sympathizers are reactionaries who have embraced a Soviet-style “never compromise” ideology that threatens to turn American democracy on its head.

Congressional scholars Thomas Mann and Norm Ornstein state it succinctly: “The GOP has become an insurgent outlier in American politics, it is ideologically extreme; scornful of compromise; and dismissive of the legitimacy of its political opposition.”

Modern Republicans in contrast to their forebears in the Nineteenth Century and some moderates who continued to uphold GOP progressivism in the Twentieth Century have long rejected the notion that government can do anything to solve the nation’s problems. They have embraced Ronald Reagan’s maxim: “Government is the problem.”

For several decades, these reactionary Republicans have fought the New Deal and its “capitalism with safety nets.” They have now advanced farther along the continuum toward anarchy or what might be called anti-government nihilism. They have introduced, writes journalist Elizabeth Drew, a new concept of governing: they are against it.

It was not always thus. The Republican Party began as an anti-slavery coalition that emerged in 1854 to combat the Kansas-Nebraska Act, which threatened to extend slavery further into the territories. The new party also promoted a more vigorous government role in modernizing the economy through such projects as the Trans-Continental Railroad. The party was led by Abraham Lincoln, the first Republican president (1861-1865), who guided the Union to victory in the Civil War and the abolishment of slavery.

Known for its pro-business nationalism and its generally progressive views on race, the Republican Party would dominate the American political scene until 1932, losing its majorities during the Great Depression (1929-1940) to Franklin D. Roosevelt’s “New Deal Coalition.”

As FDR led the country out of the Depression and through World War II, the Democrats became the dominant political party from 1932 to 1964, not only building the United States into an economic and military superpower but addressing many of the nation’s long-term ills, such as racial segregation, poverty, neglect for the elderly, and oppression of women. In these endeavors, progressive Democrats and progressive Republicans often worked together.

As NPR’s homespun humorist Garrison Keillor reflected in 2004, “Once upon a time, reasonable people could vote for Republicans, like Eisenhower. Not now: The party of Lincoln and Liberty was transmogrified into the party of hairy-backed swamp developers and corporate shills, faith-based economists, fundamentalist bullies with Bibles, Christians of convenience, freelance racists, misanthropic frat boys, shrieking midgets of AM radio, tax cheats, nihilists in golf pants”

American political scientist Andrew Hacker traces the origins of the extremist Republican Party that we know today to 1946. In that year, he notes the GOP decided to sell itself “as the voice of ordinary Americans” to voters who were resentful of postwar rising prices and shortages. With the 1946 midterm elections, in the middle of Democrat Harry Truman’s first term as president, “swept in were figures like Richard Nixon and Joseph McCarthy,” each one notorious in his own way.

Nixon’s shabby “smear campaign” treatment of Democrat Helen Gahagan Douglas firmly established him as a ruthless political “slime ball” of the first order. McCarthy gave us “McCarthyism” (using a Red Scare to destroy the careers of many left-wing dissidents and progressives from 1950 to 1956), one of the most shameful periods in American history. McCarthy, Hacker notes, “created the epithet ‘un-American,’ an accusation almost impossible to refute. Since then, the party has exhibited a coarse strain, which its corporate wing tolerates as a price of prevailing.”

The real disintegration (what blogger John Rogers calls the “crazification factor”) of what used to be called the “Grand Old Party” began with the 1964 and 1965 civil rights legislation. From that period, the GOP once known for urging “caution and prudence” in blending reform with traditional values evolved steadily into a party with a free-floating relationship with reality. The process was accelerated by the rise of Ronald Reagan, an actor and corporate pitchman who himself had only a passing relationship with facts.

Now, the Republican Party is under the thumb of uninformed and irrational Tea Party extortionists, a coalition including extremist Ayn Rand capitalists, Christian fundamentalists who reject America’s tradition of religious tolerance, and neo-Confederates who want to return to the discredited constitutional theories promulgated by slave owners in the pre-Civil War South. These disparate groups have come together to reject the New Deal principles of a social compact in which the federal government plays an important role in promoting the “general Welfare,” as spelled out in the U.S. Constitution.

Indeed, the Republican Party is now controlled by right-wing extremists who attack the expressed wording of the U.S. Constitution (while pretending to love the Constitution), and beyond that they are contemptuous of any rational governance at any level.

The GOP has evolved into a political party unlike any the United States has experienced, at least not since the Southern Democrats in 1860 seceded from the Union to protect the institution of slavery. Like those Confederates, the Tea Partiers are attacking core principles of democracy and, in effect, the Republic itself.

Over the past several decades, these right-wing Republicans have been moving “to replace our representative democracy with a politically and economically authoritarian system,” according to American cultural critic Henry A. Giroux. The Republicans, he writes, “swath their unabashed greed and self importance with distorted ‘freedom’ and ‘free market’ rhetoric, unbridled and unaccountable.”

In this process, nearly all the traditional GOP moderates have been purged, reflecting a form of ideological purity and moral certainty that is more commonly associated with authoritarian systems, not major parties in a pluralistic democracy. Respected moderates and progressives in the past like Robert M. La Follette Sr. (Wisconsin), Jeannette Rankin (Montana), Margaret Chase Smith (Maine) and Charles McC. Mathias (Maryland) would not stand a chance in today’s radicalized Republican Party.

Republicans are no longer a loyal opposition to the majority Democrats (who won not only the presidency and the Senate in 2012 but prevailed by about 1½ million votes for the House of Representatives, with the GOP’s House “majority” sustained largely through anti-democratic gerrymandering).

Today’s Republican Party has become more of an anti-democratic insurrectionary cult that disdains the will of the majority and considers governance itself a form of evil. Through this transformation, the Republicans have helped replace the American Dream with a paralyzing Nightmare that may be very difficult to end, but ended it must be.

[3] Giroux, Henry R.  “Corporate Media and Larry Summers Team Up to Gut Public Education: Beyond Education for Illiteracy, Vulgarity and a Culture of Cruelty.” Truthout.org, 2011-09-27. http://www.truth-out.org/opinion/item/3604:corporate-media-and-larry-summers-team-up-to-gut-public-education-beyond-education-for-illiteracy-vulgarity-and-a-culture-of-cruelty

[4] Hacker, Andrew.  “The Next Election: The Surprising Reality.” The New York Review of Books, 2011-08-18. http://www.nybooks.com/articles/archives/2011/aug/18/next-election-surprising-reality/?pagination=false

[5] Hacker, Jacob and Paul Pierson.  Off Center: The Republican Revolution and the Erosion of American Democracy.  Yale University Press (September 26, 2006).

[6] Judis, John B.  “Return of the Republicans.” Why they’re unlike any political party America has ever seen. The New Republic,  2011-01-13. http://www.tnr.com//article/politics/magazine/81372/return-of-the-republican-party

[7] Kabaservice, Geoffrey.  Rule and Ruin: The Downfall of Moderation and the Destruction of the Republican Party, From Eisenhower to the Tea Party (Studies in Postwar American Political Development) Oxford University Press, USA (January 4, 2012).

[10] Pitt, William Rivers.    “Half the Republicans You Know Are Insane.” Alternet, 2013-10-03.  http://www.alternet.org/print/tea-party-and-right/half-republicans-you-know-are-insane

[12] Wittes, Benjamin.  “Threatening Not to Raise the Debt Ceiling Is a National Security Issue, Too.”  New Republic, 2013-10-16. http://www.newrepublic.com/authors/benjamin-wittes