While many reformers have focused on money in politics, a parallel danger comes from the billions of dollars that right-wing ideologues have poured into media. The likes of Rupert Murdoch have made an art form out of peddling “populism” that serves the financial elites, as Bill Moyers and Michael Winship note.

Here in Manhattan the other day, you couldn’t miss it the big bold headline across the front page of the tabloid New York Post, screaming one of those sick, slick lies that are a trademark of Rupert Murdoch’s right-wing media empire. There was Uncle Sam, brandishing a revolver and wearing a burglar’s mask. “UNCLE SCAM,” the headline shouted. “U.S. robs bank of $13 billion.”

Say what? Pure whitewash, and Murdoch’s minions know it. That $13 billion is the settlement JPMorgan Chase, the country’s biggest bank, is negotiating with the government to settle its own rip-off of American homeowners and investors — those shady practices that five years ago helped trigger the financial meltdown, including manipulating mortgages and sending millions of Americans into bankruptcy or foreclosure. 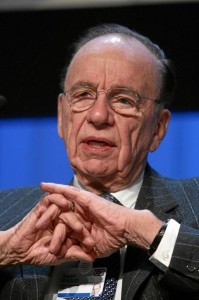 If anybody’s been robbed it’s not JPMorgan Chase, which can absorb the loss and probably take a tax write-off for at least part of it. No, it’s the American public. In addition to financial heartache we still have been denied the satisfaction of seeing jail time for any of the banksters who put our feet in cement and pushed us off the cliff.

This isn’t the only scandal JPMorgan Chase is juggling. A $5.1 billion settlement with institutional investors has just been announced and criminal charges may still be filed in California. The bank is under investigation on so many fronts it’s hard to keep them sorted out everything from deceptive sales in its credit card unit to Bernie Madoff’s Ponzi scheme to the criminal manipulation of energy markets and bribing Chinese officials by offering jobs to their kids.

Nor is JPMorgan Chase the only culprit under scrutiny. Bank of America was found guilty just this week of civil fraud, and a gaggle of other banks is being investigated by the government for mortgage fraud. No wonder the camp followers at Fox News, the Wall Street Journal, CNBC and other cheerleaders have ganged up to whitewash the banks.

If justice is somehow served, this could be the biggest egg yet across the smug face of unfettered, unchecked, unaccountable capitalism. One face in particular: Jamie Dimon, the chairman and CEO of JPMorgan Chase. One of Murdoch’s Fox Business News hosts, Charlie Gasparino, claims the Feds are on a witch-hunt against Dimon for criticizing President Barack Obama, whose administration, we are told, “is brutally determined and efficient when it comes to squashing those who oppose their policies.”

But hold on: Dimon is a Democrat, said to be Obama’s favorite banker, with so much entree he’s been doing his own negotiating with the Attorney General of the United States. But that’s crony capitalism for you, bipartisan to a fault.

Rupert Murdoch has been defending Dimon in his media for a long time. Last spring, when it looked like there might be a stockholders revolt against Dimon, Murdoch was one of many bigwigs who rushed to his defense. He tweeted that JPMorgan would be “up a creek” without Dimon. “One of the smartest, toughest guys around,” Murdoch insisted. Whether Murdoch’s exaltation had an effect or not, Dimon was handily reelected.

Over the last few days, The Wall Street Journal, both Bible and supplicant of high finance as well one of Murdoch’s more reputable publications at least in its reporting echoed the “UNCLE SCAM” indignation of the more lowbrow Post. The government just wants “to appease their left wing populist allies,” its editorial writers raged, with a “political shakedown and wealth-redistribution scheme.” Perhaps, the paper suggested, the White House will distribute some of the JPMorgan Chase penalty to consumers and advocacy groups and “have the checks arrive in swing Congressional districts right before the 2014 election.”

We can hear the closet Bolsheviks panting for their handouts now and getting ready to use their phony ID’s to stuff the box on Election Day with multiple illegal ballots. Such fantasies are all part of the Murdoch News Corp. pattern, an unending flow of falsehood and phony populism that in reality serves only the wealthy elite.

Fox News is its ministry of misinformation, the fake jewel of the News Corp. crown, a 24/7 purveyor of flimflam and the occasional selective truth. Look at the pounding they’ve given Obama’s healthcare reform right from the very start, whether the non-existent death panels or claims that it would cause the highest tax increase in history.

While it’s true that the startup of Obamacare has been plagued by its website nightmare and other problems, Fox News consistently has failed to mention Republican roadblocks that prevented the program from getting proper funding or the fact that so many states ruled by Republican governors and legislatures more than 30 have deliberately failed to set up the insurance marketplaces critical to making the new system work.

Just the other day, Eric Stern at Salon.com fact-checked a segment on Sean Hannity’s show. “Average Americans are feeling the pain of Obamacare and the healthcare overhaul train wreck,” Hannity declared, “and six of them are here tonight to tell us their stories.” Eric Stern tracked down each of the Hannity Six and found that while their questions about health reform may have been valid, the answers they received from Hannity or had decided for themselves were not.

“I don’t doubt that these six individuals believe that Obamacare is a disaster,” Stern reported. “But none of them had even visited the insurance exchange.”

And there you have the problem: ideology and self-interest trump the facts or even caring about the facts, whether it’s banking, Obamacare or global warming. Ninety-seven percent of climate scientists say that climate change is happening and that humans have made it so, but only four in ten Americans realize it’s true.

According to a new study in the journal Public Understanding of Science, written by a team that includes Yale University’s Anthony Leiserowitz, the more that people listen to conservative media like Fox News or Limbaugh, the less sure they are that global warming is real. And even worse, the less they trust science.

Such ignorance will kill democracy as surely as the big money that funds and encourages the media outlets, parties and individuals who spew the lies and hate. The ground is all too fertile for those who will only believe whatever best fits their resentment or particular brand of paranoia.

It is, as an old song lyric goes, “the self-deception that believes the lie.” The truth will set us free; the lie will make prisoners of us all.

← The Tea Party’s Confederate Roots
Geopolitics of the Drone →

6 comments for “The Lies Killing America”