Exclusive: The economic pain from the Wall Street crash of 2008 and the ensuing Great Recession has fueled the right-wing Tea Party movement in the United States and a revival of fascism in parts of Europe, including hard-hit Spain where some leaders are promoting the brutal Franco era, writes Andrés Cala.

Last week, a mayor of a Madrid suburb threatened through his Twitter account to send some “skinheads” to target opposition political leaders. The mayor, a member of the ruling conservative Popular Party, later said he was just joking and no “skinheads” actually showed up to rough up the mayor’s opponents.

In Galicia, an area in Spain’s northwest, the mayor of another town under Popular Party rule proudly showcases in his office a picture of fascist dictator Francisco Franco. The mayor also plays the fascist anthem to anyone who will listen. Yet, he has faced no official reprimand. (Last week, a small bomb believed set by anarchists damaged one of his municipal buildings.) 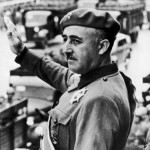 And earlier this month, a small town near Madrid, also governed by the Popular Party (or PP), allowed a fascist group to put up a stand in a public school exhibiting Franco-era and Nazi memorabilia. Officials later apologized and said that they weren’t aware of the stand.

Though anecdotal, these incidents fit with a rising public nostalgia for the Franco era in Spain and are symptomatic of a broader resurgence of extreme right-wing ideology in Europe and globally. Renewed sympathy for fascism in Spain also stirs troubling memories because the Spanish Civil War in the 1930s was an early victory for European fascism. Spain also was the last European state to cast off fascism in 1975.

Another point of concern is that nationalist, populist and fascist movements have historically found fertile ground during times of economic pain, like that felt across much of the world since the Wall Street crash of 2008. In reacting to the financial crisis and in grappling with the public’s anger over lost jobs and lost benefits mainstream democratic parties have seen their legitimacy questioned and their political support drained.

In Spain and to a lesser extent in some other European countries the immediate danger is not so much from a handful of incipient reactionary movements, but rather from the underlying official permissiveness from more mainstream conservative parties, like the Popular Party, bordering on patronage.

And this trend is not limited to the party’s lower-level officials and the rank-and-file. As part of this effort to make fascism more palatable, the Popular Party is institutionally trying to rewrite history, blaming the civil war that started in 1936 on the defeated republican side. At least half a million people died in the war in which Franco received vital support from Adolf Hitler of Germany and Benito Mussolini of Italy. More than a million fled in the aftermath to escape death squads.

Yet, some Popular Party officials have said and posted on social networking sites that those killed by Franco’s forces deserved it. The party’s second most powerful legislator in parliament has equated Franco’s crimes to those of the democratically elected republican government that Franco’s fascist regime defeated. The same legislator also has minimized the risk from today’s rising fascist tide.

Amid the Popular Party’s recent political success, with its latest high-water mark the gaining of an absolute majority in parliament, many of the party’s stalwarts have reminisced about the Franco era as a prosperous time, though it wasn’t. By the time Franco died in 1975, Spain had become an economic backwater in Europe. In 1986, when Spain entered the European Community (now the European Union), it was one of the poorest members, requiring substantial help to raise its living standards to what was normal in other western European states.

But the severe economic recession that spread across the world after the Wall Street crash and the EU’s austerity-oriented policies imposed in response hit Spain especially hard with the country’s unemployment rate soaring to around 27 percent. The loss of jobs and the failure of the democratic political structure to devise an adequate response created an opening for the rightists to revive nationalistic and other traditional cultural messages that had underpinned Franco’s politics.

Though the Popular Party is generally considered conservative not extreme right it absorbed the pro-Franco fascist “base” after that movement lost its political representation in parliament in 1982, seven years after Franco died. That extreme right now amounts to about 10 percent of the Popular Party’s constituency, according to some studies.

The numbers of far-right members are high enough so that the Popular Party is politically unwilling to chastise fascist sympathies and thus alienate a significant portion of its support. But the party is making a dangerous bet that the pro-Franco faction will not gain effective control of the Popular Party and thus fully hoist the banner of fascism again.

Last week, along the lines of that risky appeasement, Populist Party legislators voted down for a second time a motion backed by all opposition parties calling on the government to declare fascism, Franquism and Nazism as ideologies “inciting violence and hate.”

The proposal was in line with the policies of most European countries that since the devastation of World War II and the genocide against Jews and other minorities have forbidden sympathetic displays of fascism. But Popular Party legislators said inclusion of such restrictions in an overhaul of the penal code was unnecessary.

On their own, extreme-right parties in Spain have so far been insignificant, although five groups including violent neo-Nazi cells and a political party that the Supreme Court is considering banning in July formed a platform called “Spain on the March.” Its leaders have warned they will resort to violent acts if required to preserve Spain’s territorial unity, which they feel is threatened especially by regional independence aspirations.

Secessionist plans from Catalonia, Spain’s economic motor, have served to unite nationalist forces and radical fascist groups, but the most forceful opposition to Catalonian separation is coming from the right wing of the Popular Party, led by former Prime Minister Jose MarÃ­a Aznar.

Last month, a dozen radicals of the new coalition forced their way into a library where Catalonians were commemorating their national day, injuring several people, including legislators, and tearing down Catalonian symbols. Police arrested them in the aftermath, but Catalonians have suggested authorities did little to protect the commemoration.

Also, in September, several rightist groups formed a new coalition to try to gain political representation ahead of European elections.

Police estimate there are about 10,000 Spaniards involved in violent extreme-right groups. But the concern is not so much over these very small violent groups. These are mostly contained, experts agree. The bigger worry is that Franco’s political heirs retain significant influence within the ruling Popular Party and amid the euro crisis they could gain greater political clout.

For condoning fascist sympathies among Popular Party followers, the government has been criticized by the opposition, regional governments and human rights groups. However, although Spain stands out in Europe for these public pro-fascist expressions, the extreme right is making gains across much of Europe.

Perhaps the biggest game-changer is the renaissance of the French National Front party, once a pariah. Its leader, Marie Le Pen, won 18 percent of the votes in the first round of presidential elections in 2012 and her party is leading the polls for 2014 elections to the European Parliament.

In Greece, the leaders and legislators of the openly neo-Nazi Golden Dawn party will soon face court action for their role in promoting hate crimes, but the fact remains that the party won 7 percent of the national vote in 2012, and official efforts to shut it down could only embolden its followers.

This past week, Norway’s extreme right Progress Party was invited to join the government for the first time after making electoral gains. In Austria, extreme-right parties retain strong parliamentary representation, as do their equivalents in the Netherlands, Poland, Italy and Bulgaria.

Though there is little official patronage for this right-wing resurgence across Europe unlike what the Popular Party is doing in Spain the electoral prowess of these European right-wing movements gives them increased negotiating power and even some ruling authority.

In Spain, the chief concern is that an increasingly desperate public will be attracted to the historical glow that is being created around a mythical era of successful fascism under Franco.

“It’s true that this is not Greece or France, where the extreme right has become a political power,” FÃ©lix Ortega, a sociology professor and expert in public opinion in the Universidad Complutense de Madrid, told me recently. “But you never know, especially if it seems that the PP tolerates it.”

8 comments for “A Fascist Revival Stirs in Spain”