Exclusive: The U.S. news media’s bias in favor of Israel and against Israel’s enemies represents a journalistic failure to honestly inform the American people about issues that can lead to war. A glaring example is the double standard applied to Israel’s rogue nuclear arsenal, notes Robert Parry.

If a country with a large but undeclared nuclear arsenal threatens war against a country without a single nuclear bomb, you might think that a serious news organization would note the existing nuclear arsenal at least in passing. But if the country doing the threatening is Israel and the country being threatened is Iran, the New York Times can’t seem to find space to mention Israel’s rogue nuclear weapons.

The fact certainly was relevant to the Times’ storyabout Israeli Prime Minister Benjamin Netanyahu’s United Nations speech which focused on his fear that Iran might build one nuclear bomb. And Netanyahu’s threat of war against Iran was not exactly subtle, as he referenced the need for “credible military threats” and vowed that “if Israel is forced to stand alone, Israel will stand alone.” 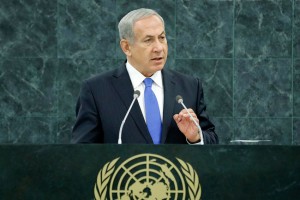 For Israel’s threat to unilaterally destroy Iran’s thus-far peaceful nuclear program to be “credible,” Israel’s nuclear weapons at least its smaller tactical nukes must be considered as possible elements of that attack. Indeed, I’ve been told that Israel’s tentative war plans against Iran include potential use of low-yield nuclear bombs to shatter some of Iran’s hardened sites.

But the New York Times article on Wednesday made no mention of Israel’s possession of nuclear weapons. Neither did a companion Times editorial which catalogued reasons why the world should be skeptical of Iran’s repeated insistence that it has no intention to build a nuclear bomb. The Times wrote:

“Iran hid its nuclear program from United Nations inspectors for nearly 20 years, and the country is enriching uranium to a level that would make it possible to produce bomb-grade nuclear material more quickly. It has also pursued other activities, like developing high-voltage detonators and building missiles that experts believe could only have nuclear weapons-related uses. These facts make it hard not to view the upcoming American-brokered negotiations skeptically.”

Given the Times’ excoriation of Iran over its alleged secrecy, basic journalistic fairness would seem to require that the Times point out that Israel has hidden its actual nuclear weapons arsenal from the United Nations for longer than 20 years and Israel has gone far beyond simply pursuing some related activities, but actually has put sophisticated delivery systems in place.

The context of Israel’s regional nuclear weapons monopoly also sheds light on why Iran might actually think it needs a nuclear weapon as a deterrent against the possibility of a preemptive nuclear strike by Israel. Yet, the Times didn’t include a simple sentence acknowledging that Israel itself possesses nuclear weapons.

Surely, if the Times did publish such a sentence in its articles on Netanyahu’s belligerent UN speech, the editors would have gotten some angry e-mails from staunch Israel backers and might have lost some subscriptions. But such fears do not justify journalistic cowardice and malfeasance.

Even the Washington Post, which has served in recent years as the media flagship for America’s neoconservatives, recognized its journalistic duty to acknowledge the existence of Israel’s nuclear weapons. In its story about Netanyahu’s speech, the Post included this simple sentence at the end of a paragraph deep down in the article: “Israel possesses an undeclared nuclear weapons arsenal.”

The sentence didn’t amount to much. The Post could have done a lot more to elaborate on this reality and its relevance to Iran’s behavior. But its inclusion represented at least a minimal nod to journalistic ethics. The Times couldn’t bring itself to do even that.