Between a Congress dominated by Tea Party extremists and a Supreme Court controlled by corporate partisans, hopes for addressing America’s worsening income inequality are dim. But union leader Richard Trumka says the fight is more crucial than ever, writes Michael Winship.

“It’s time to turn America right side up!” AFL-CIO President Richard Trumka exhorted those in attendance at the labor alliance’s quadrennial convention in Los Angeles on Monday. Time, he said in his keynote address, to change the ratio of power, to put the 99 percent in charge rather than let the richest one percent dominate government, politics and society.

“Since 2009, the pay of America’s corporate CEOs has gone up nearly 40 percent,” Trumka noted. “Imagine for a second what kind of country we would live in if ordinary people’s incomes had increased like CEO’s. Almost no one would live in poverty.” 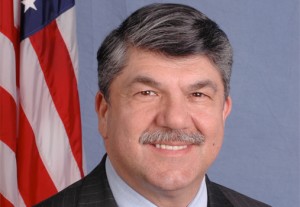 Trumka recognized that the number of Americans in unions continues to decline although the AFL CIO is “13 million strong — we are today, as we have been since the time of Abraham Lincoln, the biggest, strongest, best organized force for economic justice in America.”

But, Trumka continued, “We are a small part of the 150 million Americans who work for a living.  We cannot win economic justice only for ourselves, for union members alone.  It would not be right and it’s not possible.  All working people will rise together, or we will keep falling together.”

To that end, and in perhaps the most radical restructuring of labor since the AFL and CIO merged almost 60 years ago, the convention endorsed the expansion of the AFL-CIO’s membership to include non-traditional labor organizations, including non-profits organizing low-wage workers.

As described by AFL-CIO senior writer Kenneth Quinnell, “The AFL-CIO is going to expand existing forms of participation in the labor movement and create new forms of membership that are available to any workers not already covered by a collective bargaining agreement or who are not members of unions or represented by unions.”

Monday was the first full day of the AFL-CIO convention. The Syrian crisis prevented President Obama from making a scheduled appearance (he sent brief videotaped remarks instead) but Sen. Elizabeth Warren, D-Massachusetts, despite Syria-related intelligence briefings and negotiations, was able to move her planned Monday address to Sunday afternoon at the convention’s opening half-day. It was a barn-burning call to arms.

“When important decisions are made in Washington, too often, working families are ignored,” she said. “From tax policy to retirement security, the voices of hard-working people get drowned out by powerful industries and well-financed front groups. Those with power fight to take care of themselves and to feed at the trough for themselves, even when it comes at the expense of working families getting a fair shot at a better future.”

Warren bluntly condemned the government sequester as “stupid” and sharply criticized the Supreme Court. “According to a recent study,” she said, “the five conservative justices currently sitting on the Supreme Court are in the top ten most pro-corporate justices in a half century — and Justices Alito and Roberts are numbers one and two — the most anti-consumer in this entire time.

“The Chamber of Commerce is now a major player in the Supreme Court, and its win rate has risen to 70 percent of all cases it supports. Follow this pro-corporate trend to its logical conclusion, and sooner or later you’ll end up with a Supreme Court that functions as a wholly owned subsidiary of big business.”

She concluded: “Our agenda is America’s agenda. The American people know that the system is rigged against them and they want us to level the playing field.  That’s our mandate! I’ve already fought and lost my share of battles in Washington, and I’ve been around long enough to know that Washington is a tough place.  Real reform isn’t easy.  But I also know this:  If we don’t fight, we can’t win. But if we fight, we win.”

Before the convention began Sunday afternoon, the morning was devoted to a short conference on inclusion and diversity, important to a labor coalition for too long criticized as “pale, male and stale.” Today, women and minorities play a prominent role in organized labor, although when it comes to age it was pointed out that reportedly only seven percent of union members are under 35.

The older among us at the convention are half-jokingly described as “seasoned,” so a highlight of the morning was the appearance of civil rights hero the Rev. James Lawson, soon to be a seasoned 85. He trained many of the movement’s leaders, including John Lewis, in the techniques of non-violent civil disobedience.

At the conference, he condemned what he called the “spiritual wickedness of plantation capitalism. Seven of ten people in the world work at or below a poverty level that is simply another name for slavery.”

Serving up two aphorisms relevant to all in attendance at this year’s convention, Rev. Lawson pointed to the words of the Greek philosopher Thucydides, who when asked when justice would come to ancient Athens, said it would come when the uninjured were as outraged as the injured. And the Methodist pastor cited Proverbs 29:18 — where there is no vision, the people perish.

Moyers & Company senior writer Michael Winship is president of the Writers Guild of America, East, and is attending the AFL-CIO convention as a delegate.

12 comments for “A Desperate Fight for the Middle Class”