By seeking congressional approval before bombing Syria, President Obama may have recognized a political reality the danger from pressing ahead unilaterally on a risky mission but the move also offers a valuable breather in the hasty rush to war, as ex-CIA analyst Paul R. Pillar explains.

It is not surprising that he seeks as much buy-in as possible from the legislative branch. He and his political advisers also will be able to watch how this issue intensifies intramural tussles among Republicans. 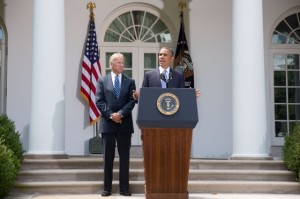 President Barack Obama makes a statement on the situation in Syria, with Vice President Joe Biden, in the Rose Garden of the White House, Aug. 31, 2013. (Official White House Photo by David Lienemann)

Besides any reasons for the referral that may please the President’s political advisers, there are good reasons that ought to please any American citizen. Involving the legislative branch on this important decision is, just as the President said in his statement on Saturday, the way a constitutional democracy ought to operate.

A congressional debate and vote on whether or not to authorize the use of military force against Syria will be an encouraging step that will, at least for the moment, reverse the discouraging atrophy of Congress’s war-making power.

There also are some early signs that the debate will go beyond surface rationales and delve into some of the more important implications of the proposed use of military force. Although there is still too much focus on one reported use of an unconventional weapon, some members have explicitly acknowledged that an empirical question about a chemical weapons incident is different from the policy question of whether it makes sense to apply U.S. military force in Syria.

It is healthy for Congress and for U.S. policy for members to strive consciously to avoid the pathologies that led to the Iraq War. Just about any deliberative process about whether to employ military force will be an improvement on what happened before that earlier war, when there was no such process at all in the Executive Branch and only a perfunctory one in the legislative branch. This time there even will be committee hearings, which never took place before the Iraq War.

Congress being Congress, however, let us not get too high our hopes for care and profundity in the deliberative process that is about to begin. Some of the most important complexities of this issue do not lend themselves well to sound bites or easily understood positions in a re-election campaign.

When a resolution authorizing military force comes to a vote, members will cast what is described as a “vote of conscience.” But like all their votes, it will be at least as much a vote of politics. There are many different political games that will get played with the Syria issue. Perhaps what we should hope for most is that even some games that are played for the wrong reasons will have the effect of promoting an outcome that minimizes damage to the national interest.

One thinks in this regard of the habit of some Republican members to oppose anything that Barack Obama has proposed. If such a habit can go to the extreme it has with health care reform, over a plan that was more of a Republican idea before Obama made it his signature domestic program, and is now the law of the land, it will not be surprising if some members one might otherwise assume would be hawkish, quick-on-the-trigger Assad-haters will vote against what would be one of Obama’s biggest foreign-policy actions.

Working in the other direction will be the perennial elephant in the room on anything Congress does regarding the Middle East: the Israeli government and its lobby in Washington. The upheaval in Syria has involved a mixture of concerns for Israel, but the principal Israeli objective that seems to be most engaged in the U.S. handling of the Syria question is to sustain hostility toward Iran and to undermine prospects for an agreement with Tehran.

A U.S. military intervention in Syria probably would help to serve that Israeli purpose by making it politically harder for Iran’s President Hassan Rouhani and his allies to make concessions to the United States and the West that would be necessary to reach agreement on Iran’s nuclear program (notwithstanding what may be a broadly shared Iranian dismay over the use of chemical weapons in Syria).

How all this nets out on Capitol Hill is uncertain, and the current betting line seems to place about even odds on either passage or rejection of a resolution authorizing the use of military force.

Suppose the resolution fails; what would Obama do then?, a question he understandably declined to answer when it was shouted at him after his statement last Saturday. A negative vote certainly would be viewed immediately as a significant political embarrassment and setback for the President. This is mainly what underlies commentary to the effect that Obama has taken a risk by calling for a congressional vote.

This president, however, may perceive even greater risks in going ahead and attacking Syria after a rejection by Congress. These would include not only the domestic risks of flouting, in stark contrast to David Cameron in Britain, the will of the people’s elected representatives, but also the considerable risks of an attack leading to deeper, more costly, and ultimately ineffective involvement in the Syrian civil war.

So the President might at that point say, “I tried, but Congress has spoken, and I respect the decision of Congress.” If that happens, political motives and sound foreign policy calculation will have combined to produce the outcome least damaging to the national interest.

← Understanding the Syrian Civil War
Should We Fall Again for ‘Trust Me’? →

2 comments for “Putting a Rush to War on Pause”