Not only has the Obama administration presented no hard evidence to support its charge that the Syrian government used chemical weapons, President Obama’s plan to retaliate with cruise missiles in violation of international law suggests a Mideast strategy in disarray, say Flynt and Hillary Mann Leverett.

As the Obama administration proceeds with its tragi-comic preparations for military strikes against Syria, with no domestic or international legitimacy, it is losing allies and partners at an impressively rapid pace, faster than even the George W. Bush administration was able to achieve at its most egregiously offensive.

The Arab League, in the end, declined to endorse military action against Syria, Britain decided not to go on this particular martial walk with its American master, and, for once, Sen. Rand Paul, R-Kentucky, is not the only member of Congress raising his voice against the prospect of another illegal use of military force by yet another U.S. administration. 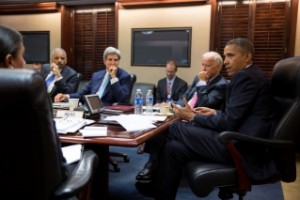 Once carried out, the Obama administration’s thoroughly telegraphed strike on Syria, ostensibly over alleged chemical weapons use there, will mark an important inflection point in the terminal decline of America’s Middle East empire. Most importantly, it will confirm that America’s political class, including President Barack Obama himself, remains unwilling to face the political risks posed by any fundamental revision of Washington’s 20+-year, deeply self-damaging drive to dominate the region.

Obama initially ran for president pledging to end the “mindset” behind the strategic blunder of America’s 2003 invasion and occupation of Iraq; in his first term, he committed to ending America’s war in Afghanistan, too, and to “rebalancing” toward Asia. But Obama was never ready to spend the political capital required for thoroughgoing recasting of U.S. foreign policy; consequently, the dissipation of American power (hard and soft) evident under George W. Bush has accelerated under Obama.

Obama’s approach to Syria illustrates why. Since conflict started there two and a half years ago, Washington has had openings for a negotiated resolution. This, though, would entail power-sharing between Syrian President Bashar al-Assad and oppositionists and cooperation with Russia, Iran, and China to fix a settlement. Instead, Obama doubled down on reasserting American hegemony.

When unrest began in Syria in March 2011, Obama and his team were desperate to show, after the loss of pro-Western regimes in Tunisia and Egypt, and near-misses in Bahrain and Yemen, that the Arab Awakening did not just threaten authoritarian orders that subordinated their foreign policy to Washington. They wanted to show that leaders committed to foreign policy independence, like Assad, were vulnerable, too. They also calculated that Assad’s ouster would tilt the regional balance against Tehran, generating leverage to force Iran’s surrender of its right to an internationally safeguarded but indigenous nuclear fuel cycle.

Two years ago, Obama declared that Assad “must go,” eviscerating prospects for a political settlement. Obama further damaged diplomatic prospects with three UN Security Council resolutions effectively authorizing coercive regime change in Damascus, which Russia and China vetoed. His Syria strategy rested on the surreal proposition that a staggeringly fractious “opposition,” much of which publicly aligns with al-Qa’ida and is not supported by anything close to a majority of Syrians, would unseat Assad, who (according to polls and other evidence) enjoys support from at least half of Syrian society.

Obama compounded all this with an equally foolish declaration that chemical weapons use was a U.S. “red line”, giving those looking for U.S. intervention motive to gas innocent civilians. Now that such weapons have been used, Obama cannot entertain that oppositionists may be responsible, for this would undercut his Syria strategy.

His administration has presented no evidence that Assad’s forces used chemical weapons in Ghouta; when it alleged chemical weapons use at Khan al-Assal in March, it also offered no evidence of government responsibility. By contrast, Russia publicly presented a detailed forensic analysis showing that neither the munitions used at Khan al-Assal nor the chemical agent in them had been industrially manufactured and that, “therefore, there is every reason to believe that it was the armed opposition fighters who used the chemical weapons.”

Washington rejected this, and, after trying to derail a UN investigation of more recent allegations about Ghouta, has preemptively dismissed whatever UN inspectors there now may conclude.

With these positions, Obama has left himself no option except using force to preserve U.S. “credibility.” His planned strike, though, is illegal. Even if chemical weapons were used, it does not justify U.S. aggression. Syria is not a party to the Chemical Weapons Convention (CWC); the 1925 Geneva Protocol, to which it is a party, only proscribes chemical weapons use in war against another state. Neither designates Washington as its “enforcer.” More broadly, the United Nations Charter, which America largely drafted, forbids using force except under two circumstances:

–“[I]f an armed attack occurs against a” member state; regardless of who used chemical weapons in Syria, no other state was attacked or threatened with attack, so the “right of individual or collective self-defense” posited in the Charter does not apply (unless one stretches the definition of “self-defense” to mean “anything Washington does not like”).

— When the Security Council authorizes force “to maintain or restore international peace and security”; no such resolution is in effect for Syria, and Russia and China will prevent the Council from adopting one.

Lack of legality has undermined the willingness of the Arab League and even of usually reliable hangers-on like Britain to endorse a strike. When Obama moves, he will have a smaller coalition than Bill Clinton or George W. Bush had for their illegal wars in, respectively, Kosovo and Iraq.

Obama’s strike will further accelerate erosion of America’s position in the Middle East. Assad will emerge with greater political support, not less; Russian and Chinese influence will be enhanced. While backing Assad has cost Iran and Hezbollah some of the popularity they accrued with Sunni Arab publics from their long records of “resistance” to Israel and America, both judge that, if either America or Israel becomes militarily involved in Syria, this will undercut Saudi-sponsored narratives depicting the conflict in sectarian terms, transforming it into more Iranian-led resistance.

Obama is about to oblige them, ushering in a regional balance increasingly tilted against the United States.

Flynt Leverett served as a Middle East expert on George W. Bush’s National Security Council staff until the Iraq War and worked previously at the State Department and at the Central Intelligence Agency. Hillary Mann Leverett was the NSC expert on Iran and from 2001 to 2003  was one of only a few U.S. diplomats authorized to negotiate with the Iranians over Afghanistan, al-Qaeda and Iraq. They are authors of  Going to Tehran. [This article previously appeared at The Hindu, Huffington Post and GoingtoTehran.com.]