On Sept. 18, 1961, a plane carrying UN Secretary-General Dag Hammarskjold crashed in Africa as he was negotiating to stop a war in Congo. Hammarskjold’s death removed one of the great advocates for international peace, as Roger Lipsey explains in a biography reviewed by Winslow Myers.

Roger Lipsey has produced a magisterially comprehensive portrait of the second Secretary-General of the United Nations, Dag Hammarskjöld, in his 2013 book Hammarskjöld: A Life. Lipsey’s achievement is all the more remarkable because at first glance Hammarskjöld appears to be, in the combination of his monastic bachelor dedication to his role and his veiled diplomatic tact, a uniquely unknowable person.

As Secretary-General, what kept him steadily moving forward against the gale-force winds of chaos, violence and cynical double-dealing by governments was his systematic subjugation of individual will to a fervent wish to be used by God. 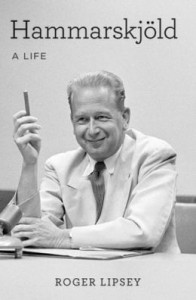 Brought up in Swedish Protestant Christianity, a deep reader of the Christian mystics, Hammarskjöld not only valued, but actually lived, what he called “stillness,” a creative discipline that enabled him to stay flexibly creative in the welter of such events as the Suez crisis of 1956, when he was one of the first to initiate the exhausting process of shuttle diplomacy.

The working heart of Lipsey’s approach is to subtly tie the entries in “Markings,” Hammarskjöld’s spiritual poetry, a number of which are specifically dated, to the stream of acute international crises in which Hammarskjöld was crucially involved, including the battle for Congolese independence, during which he lost his life in a plane crash, a crash that may not have been accidental.

Hammarskjöld’s refusal to compromise his impartiality, his total loyalty to the principles of U.N. Charter, was seen by his enemies as a kind of partiality in itself, in the spirit of “if you’re not with us you’re against us”, that all-too-familiar accelerant of alienation and war.

Even as he describes Hammarskjöld’s difficulties with the prickly egotism of heads of state, Lipsey has managed to absorb some of the spirit of Hammarskjöld himself, as found in this quotation from an interview Hammarskjöld did with a journalist: “A certain humility . . . helps you to see things through the other person’s eye, to reconstruct his case, without losing yourself, without being a chameleon, if you see what I mean.”

Inspired by Hammarskjöld, Lipsey takes considerable pains to search out the universal humanity beneath the arrogance of figures like Nikita Khrushchev of the Soviet Union and French General Charles de Gaulle.

As this article is being written, an alleged gas attack killing hundreds of civilians in Syria is putting more and more pressure upon Western leaders to intervene in yet another horrific civil war. The superpower players are hardly different from Hammarskjöld’s time, Syria being a client state of Russia.

The web of corruption and violence in the Congo has only become more and more tangled during the 60 years between Hammarskjöld’s death and the present. Not a lot has changed since he was Secretary-General, except that since the end of the Cold War, U.S. military power has taken the partisan place of what might have been, and still could be, a transition toward a nonpartisan U.N. with more effective nonviolent peacekeeping forces, including far more comprehensive arms sales bans and economic sanctions that target elites.

But public opinion in the U.S. today concerning international cooperation still yields a division between conservative “realists” and progressive “dreamers”, advocates for a U.N. with more teeth often being stereotyped as the latter.

Hammarskjöld himself was something quite different from a dreamer. He kept tenaciously to his understanding that if peace was an international necessity in the nuclear age, it had to follow that peace was also in every country’s national interest.

Given that challenges like nuclear disarmament and global climate change cannot be resolved by any nation working alone, national and international interests are inevitably merging. Surely this has a bearing upon how diplomats everywhere ought to be oriented in their training.

If foreign service officers are unable to see the equal humanity of their counterparts in other cultures, if a spirit of international mutuality does not penetrate the narrowness of self-interested realpolitik, we will be left with the no-win of “you’re either with us or against us.”

Surely there must be room for more of the Hammarskjöld spirit, a conviction that it is possible to identify something common in the interests of one’s own country and the interests of all countries.

The tragedy is that statesmen like Dr. Kissinger or General Colin Powell spend their careers in the obedient service of ostensibly American interests, but then, in the backward-glancing wisdom of retirement, they advocate eloquently, not that we shouldn’t be grateful, better late than never, for planet-oriented goals like the total abolition of nuclear weapons.

Hammarskjöld, speaking to a group of American governors, understood this process with laser clarity: “It is one of the surprising experiences of one in the position of the Secretary-General of the United Nations to find in talks with leaders of many nations, both political leaders and leaders in spiritual life, that the view expressed, the hopes nourished, and the trust reflected, in the direction of reconciliation, go far beyond what is usually heard in public.

“What is it that makes it so difficult to bring this basic attitude more effectively to bear upon the determination of policies? The reasons are well known to us all. It might not be understood by the constituency, or it might be abused by competing groups, or it might be misinterpreted as a sign of weakness by the other part. And so the game goes on, toward an unforeseeable conclusion.”

At some indefinable point in time, which many believe is already behind us, the need for separate nations either to maintain their grotesque stockpiles of nuclear weapons or to refuse to adjust their economic goals for the sake of climate stability, is going to be trumped by the reality that the status quo carries more risks than the risks of cooperation toward common survival goals.

Winslow Myers leads seminars on the challenges of personal and global change,  is the author of Living Beyond War: A Citizen’s Guide, serves on the advisory board of the War Prevention Initiative, and writes for PeaceVoice.

← A CIA Hand in an American ‘Coup’?
The Broader Stakes of Syrian Crisis →

2 comments for “A Life Sacrificed for Peace”