The Israeli government and its U.S. lobby are pulling their political levers in Washington to prevent a cutoff of U.S. aid to Egypt in response to the military coup and bloody crackdown on Islamists and backers of ousted President Morsi. But saving the Camp David Accords is not the reason, says ex-CIA analyst Paul R. Pillar.

As the Obama administration struggles to walk a fine policy line on Egypt that takes appropriate account of the diverse U.S. interests at stake, one subject that is often mentioned, but shouldn’t be, as a reason to go easy on the head-cracking Egyptian generals is to maintain the Egyptian-Israeli peace treaty.

This is not to say that Egyptian-Israeli peace is not still quite important to regional security as well as to U.S. interests; indeed it is. But the reason this topic should not be shaping U.S. policy toward the political drama today in Egypt is that the peace is simply not in danger. No Egyptian regime would see any advantage in breaching it. 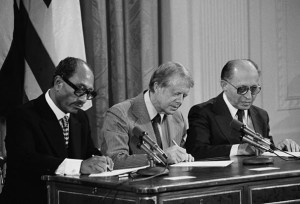 That is so because not just the generals but also any Egyptian leader with at least half a brain would realize that in any new round of fighting the Egyptians would get clobbered by a vastly more capable Israeli force. Getting clobbered would mean not just military defeat but also the humiliation and political costs that would go with it.

The last time the Egyptians were able to hold their own militarily against Israel was in the opening days of the Yom Kippur War of 1973, when Anwar Sadat used the advantage of surprise to score just enough success on the battlefield to atone for the humiliation of the war six years earlier and make it politically possible for him to undertake the initiative that led to the peace treaty.

Even that military success did not last long. By the time of the cease-fire Israeli forces had successfully counterattacked, had surrounded the Egyptian Third Army, and were rolling toward Cairo.

So as Israel lobbies western governments to keep supporting General el-Sisi and his colleagues, let us not act as if the Egyptian-Israeli peace is at stake when it really isn’t. We might reflect instead on other possible and actual Israeli motives for taking that position.

There is the understandable concern, which any country in Israel’s geographic position would have, of violent militants operating in, and out of, the Sinai. But recent history lends little support to the idea that this problem is likely to diminish rather than to grow if the generals are left in charge and unpressured from outside the country.

The opposite is more likely true, given the prospect their harsh policies will provoke increased violent militancy from battered Islamists. In any case, cross-border violence by militants is the sort of thing the Israelis have repeatedly shown themselves quick to address with their own means, regardless of what any government on the other side of the border may think.

Because the Egyptian generals’ policies are most conspicuously a form of Islamist-bashing, the Israeli government naturally and reflexively smiles on those policies. Here again, however, the connection between political outcomes in Cairo and the effects that most interest the Israelis is not clear-cut. During his tenuous one year in office, Mohamed Morsi did not prove to be as steadfast a friend as Hamas, the Islamists Israel works hardest at bashing, had hoped he would be.

Some in the Israeli government may be thinking of a possible downside for them of emphasizing the idea that the peace treaty is endangered. This idea may bring to mind how the U.S.-Egyptian aid relationship is rooted in the bargains struck by Jimmy Carter at Camp David, in which voluminous U.S. assistance to Egypt was part of the price the United States paid to get Sadat to assume the costs and risks of making a separate peace with Israel.

That in turn may bring to mind how Israel did not fulfill its part of the bargains, which was to make a peace with the Palestinians within five years and withdraw Israeli troops from Palestinian territory.

This subject leads to what may be the strongest motive for the Netanyahu government to oppose squeezing the flow of aid to Egypt, although it would not openly acknowledge it as a motive. The Israeli Right has to be discomfited by any thought of the United States using leverage based on a major aid relationship in that part of the world to get the recipient to change destructive policies.

It is the failure of the United States to use the even greater leverage it could exert on Israel that permits Netanyahu’s government to continue the occupation and colonization of conquered territory and, 35 years after Camp David, to deny the Palestinians self-determination.

← In the Grip of Warfare
Will the American Right Kill Us All? →