When George W. Bush launched an aggressive war on Iraq in 2003, he was violating a host of treaties and international laws, though he would face no accountability. One violated law was a U.S.-sponsored treaty, signed in 1928, that renounced war as an instrument of foreign policy, as Steve McKeown recalls.

A favorite song among peace activists is one written by Ed McCurdy in 1950. It goes like this: “Last night I had the strangest dream I’d ever dreamed before. I dreamed the world had all agreed to put an end to war. I dreamed I saw a mighty room, and the room was filled with men. And the paper they were signing said they’d never fight again.”

In his well-researched book When the World Outlawed War, David Swanson has written, “That scene had already happened in reality on August 27, 1928, in Paris, France.” That was the day the Kellogg-Briand Pact was signed, named after U.S. Secretary of State Frank Kellogg and French Foreign Minister Aristide Briand, both of whom drew up the pact. Kellogg was awarded the Nobel Peace Prize of 1929 for this. Officially the pact was called the General Treaty for Renunciation of War as an Instrument of National Policy. 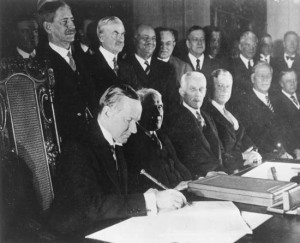 Initially, 15 countries signed the pact and many more signed shortly thereafter. Within the U.S., the Senate ratified it in an 85 to 1 vote. President Coolidge then signed it, and it was recognized as a binding agreement as of July 24, 1929. It remains on the books to this day as part of what Article VI of the U.S. Constitution calls the “supreme law of the land.” Eighty-four countries are signatories.

But today most people even in Minnesota, the state that Secretary of State Frank Kellogg was from, believe that Kellogg Boulevard, a prominent St. Paul street, was named after Kellogg breakfast cereal. Many students and teachers of international law and congressional representatives don’t know anything about the pact, with the exception of those who have been exposed to it through recent efforts to revive awareness.

Yet Frank Kellogg, after whom Kellogg Boulevard is named, is the only Minnesotan ever to have won the Nobel Peace Prize. Hardly known for efforts in peacemaking as a U.S. senator, he surprised everyone when, as secretary of state, he promoted a law universally against war and convinced French Foreign Minister Aristide Briand of its necessity. (Briand had been pushing for a treaty that would ban war only between France and the U.S.)

Much more went into the treaty to ban war, of course, than the actions of the two leaders for whom it is named. Our culture is so militarized now that it’s necessary to understand how different the environment in the world and in the U.S. was in 1928 and 1929.

The movement to outlaw war arose as a result of the horrific World War I experience with poison gas, constant shelling, corpses, rats, mud and blood in trenches separated by barbed wire, sometimes not even miles apart; some battles resulted in rivers running with blood.

Nearly ten million were killed and 20 million wounded in what was supposed to be “the war to end all war.” A staggering 100 million people also died due to influenza that is, of little doubt, attributable to the war, as the contagion spread among troops and civilians. By and large, people were totally sick of war.

As the war was supposedly fought on the premise of being “the war to end all war,” many were angry in its aftermath that they had been deluded into believing that the end could justify the means and they called for accountability; the expectation was that, in the future, countries signing the pact would be accountable to each other. Another very important factor conducive to the forming of the pact was that our military industrial complex was much smaller at that time.

The political environment was also much more receptive, as David Swanson describes in his book: “The peace movement growing in the 1920s developed in a nation different from the United States of the twenty-first century in many ways. One of them was the state of political parties. The Republicans and Democrats were not the only game in town. They were pushed in the direction of peace and social justice by Socialist and Progressive Parties.”

Beyond political parties, he explains the enormous grassroots groundswell that was necessary to pressure those in power to ban war through the pact: “Senators who denounced it on the floor during the ratification debate voted for it out of fear of their constituents. Activists organized a flood of petitions and letters and press and meetings and lobbying.”

Grassroots movements in the Midwest, where the progressive populist movement was very strong, played a prominent role in the move to outlaw war. Salmon Oliver Levinson of Chicago led what was called “the Outlawry movement,” launching a national campaign organized to ban all wars.

Women who had organized through the suffragette movement became an active force in the peace movement. In 1925, Carrie Chapman Catt of Iowa, who had established the Women’s Peace Party, created the Committee on the Cause and Cure of War, which gathered five million members and became a force in lobbying for the Kellogg-Briand Pact. Twelve million women planned 48 state conferences to pressure the Senate to ratify the treaty.

Women from many countries organized. Jane Addams of Chicago, renowned in theU.S.as a prominent reformer and advocate for women’s and children’s issues, was active in women’s international peace efforts uniting women at a conference in The Hague, Netherlands, in the wake of World War I. She became the first international president of the Women’s International League of Peace and Freedom, which was a strong supporter of the Kellogg-Briand Pact in the U.S. and Europe. Addams led a delegation delivering 30,000 signatures to the White House and also sent it to Briand in Paris.

These groups and individuals and many more saw in the Kellogg-Briand Pact a worldwide organizational effort to control aggression between nations in a way other than militarily in the hope of having nations work together instead of against each other.

The Kellogg-Briand Pact has never been revoked by either the U.S. or the UN despite the UN’s increasing role in fighting wars. As to outlawing war, the Kellogg-Briand Pact was more direct and stronger than the United Nations Charter, which came into being in 1945 after World War II, and its predecessor, the League of Nations. This is because it outlawed all war, not just aggressive war, which could be rationalized in all kinds of imaginable ways.

There are no loopholes in the Kellogg-Briand Pact. While it does not rule out self-defense, it does not claim self-defense as a justification for going to war. That’s because countries will always claim self-defense as a way to justify going to war. (When the U.S. Senate ratified the treaty, it did add that it must not infringe on the U.S.’s right to defend itself. The U.S. Senate also added, on ratifying it, that it was not obliged to take action against those who violated the treaty.)

If there is a weakness in it, it is that the arms merchants undermined it before the ink was dry, something that the Women’s International League for Peace and Freedom was quick to point out.

Aside from being vulnerable to the predatory plans of arms merchants, one criticism leveled against the Kellogg-Briand Pact is that there are no means of enforcement. Its effectiveness has always been a matter of signatories choosing to honor it.

Even though the vast majority of people are unaware of the pact today, many of those in powerful positions must have some idea of its implications. This is because the Kellogg-Briand Pact, which calls war, itself, a “crime against the peace” later served as the legal basis for prosecuting the Nazis at Nuremberg.

Leaders don’t want to be in the position of being prosecuted for waging war. That’s one reason we now have undeclared wars which are called “conflicts,” “police actions,” “humanitarian interventions,” “enforcing sanctions,” and “operations” such as Operation Just Cause and Operation Desert Storm, instead of wars. In addition, the public is not told about some wars at all, as they are conducted covertly.

Veterans for Peace, Chapter 27, has been active in acquiring signatures calling for a national holiday to be observed each Aug. 27 on the anniversary of the signing of the Kellogg-Briand Pact in the hopes that this can begin to change our ideas about war.

By reviving the history of the life and legacy of the man whom one of St. Paul’s most well-traveled streets was named after, we want to get people to think about the reason he was awarded the Nobel Prize for Peace and thus open up the very real possibility of further discussion about how this law came into being, why it did, and why it is important today.

We cannot match, on a case by case basis, all the scenarios that the Pentagon in Washington, D.C., all its lobbyists, and all the war planners in the world conjure up. As peace advocates, our strength lies in maintaining the belief that it is possible to abolish war once and for all. We may find that outlawing war is in our deeper human nature more than any imagined determination that war is inevitable.

Steve McKeown, a founding member of Veterans for Peace, Chapter 27, is a longtime Twin Cities peace activist and, in addition to other antiwar work, has been working for the proclamation and national holiday to honor the anniversary of the signing of the Kellogg-Briand Pact. [This article was originally published by Women Against Military Madness at wammtoday.]