P.R. experts are skilled at framing policy debates in favorable though misleading ways, like the “war on terror” or the “war on drugs.” What gets shielded by this packaging are the unstated goals, interests and outcomes that would draw popular opposition if known, writes Arjen Kamphuis.

When trying to understand current events in their fuller context, it’s often more useful to look at the policies and interests that are influencing these events rather than individual cases (although the individual cases often make up “the news”). That is because there is often a gaping chasm between the formally stated goals of a policy and its actual effects.

Think of the “wars” on various nouns such as “terror” or “drugs.” Though framed in simplistic P.R. terms, these “wars” justify a variety of other actions and serve many additional interests. Massive surveillance of citizens has emerged from the “war on terror,” and a prison-industrial complex and money-laundering banks have profited from the “war on drugs.” 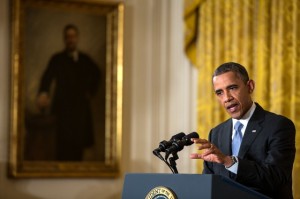 Despite this reality, discussions about and opposition to these “wars” are often argued from the rather fictional standpoint that the stated goals are the actual goals. In the mainstream news media and conventional political circles, that’s often the case even if it is patently obvious that the policy in question does not further the supposed goal and that everybody smart enough to have some influence is aware of this.

Opposition against misguided or destructive policies thus allows the parameters of the debate to be fenced-in by its proponents. It’s pretty hard to win any debate if the other party can define (and re-define) the terms of the debate, moving the goal-posts without a need for any evidence that these goal-posts were reasonably placed to begin with.

When a pharmaceutical company wants to bring a new pill to market they need to show, in a series of transparently documented clinical trials, that the pill does what it is supposed to do and does not have (too many) negative side-effects. Evidence-based decision making is the norm and — while far from perfect — this standard prevents useless or downright dangerous pharmaceuticals from entering the market and thus the bodies of humans.

So when governments develop policies it is reasonable to ask: what problem does this solve? What new problems does it create? What proof do you have that your claims about these problems and their solutions are actually true? So let’s just assume for a moment that the people keeping these policies going have roughly the same IQ and information as you and I. They can understand the effects of policies even if these are completely different from officially stated objectives.

It is believable (depending on your gullibility) that a policy that turns out to have the opposite effect that it was meant to have will be kept going for a little while through administrative inertia. But at some point this stops being a credible explanation. There is a limit to what we can explain by sheer stupidity of policy-makers really there is!

You can believe some of the policy-makers are stupid some of the time but it is not reasonable that all of them are completely insane all of the time for decades. So when policies seem to have clear effects that structurally differ from the officially stated goals, I would suggest that the policy is working just fine; its goal is just not what the stated goal is.

To understand what the real goal of a system of policy is we can simply look at its most obvious beneficial effects. What’s it for? What’s it good at? Let’s look at the example of the clearly failed policy of “The War on Drugs.”

Since that paragon or trustworthiness Dick Nixon “launched” it two generations ago, the global market in illicit drugs has exploded to a $500 billion enterprise, all of it outside any form of government oversight or control. Amid a plentiful supply, price has dropped almost constantly over this time across the entire Western World while potency has increased.

The goal of “banning” certain drugs from society has clearly and abjectly failed. In the process most judicial systems of modern countries spend the vast majority of their capacity waging this war. This to the detriment of doing things like improving public safety or going after violent criminals, rapists or thieves.

So clearly this policy of prohibition is not working, for all the reasons alcohol prohibition did not work in the U.S. in the early 20th Century. So why keep it going? What are the upsides and who is benefiting? Obviously many people working in law-enforcement are benefiting (job security), privatized prison systems are benefiting (more business), governments looking for excuses to arbitrarily arrest people are benefiting. Banks where the billions are laundered are benefiting.

So lots of parties have an interest in keeping the policy going, even though it has patently failed at any of its original or (re)stated objectives. The only logical conclusion is that the real objectives of the policy are now to provide the various benefits to parties above.

Looking at the surveillance state from this non-naive perspective; what are all the systems, organizations and procedures good at? PRISM and the wider tool set disclosed by Edward Snowden are obviously not very well suited to hunting down plotting terrorist masterminds. You know, the really brilliant ones that can successfully defeat the entire multi-trillion-dollar U.S. air defense infrastructure armed with just a few box-cutters. People that smart do not plan their operations on Facebook or use unencrypted Gmail accounts for communications (unlike certain libidinous generals tasked with hunting them).

Many former intelligence and security services officials have stated that the way to fight terrorism is good old investigative police work and perhaps a serious look at the stated grievances that are the reasons for the radical behavior. This is how most European terrorist networks were successfully dismantled in the late 20th Century.

Finding a needle in a haystack is not served by adding ever more hay. So logically the goals of these programs are not “catching terrorists” or preventing attacks, something they have never demonstrably done. But this does not mean that these systems have no use. They are of use and are being used for what they are good at: suppressing dissent in democratic societies.

This is done by infiltrating and breaking up activist networks and thus pre-empting effective protest. By labeling non-violent and legitimate political activity “extremism” or “terrorism,” the entire suite of anti-terror laws erected over the last decade can be brought to bear against citizens using their democratic rights to protest various wrongs that they perceive in society (human rights, environmental problems, governmental corruption, abuse of power by corporations, etc.).

Therefore, any realistic discussions on the nature of the surveillance policies we live under need to start from the understanding of the true nature of these systems and policies. It’s not a mistake or polite difference of opinion on how to address “security” questions. Effectively resisting these policies cannot be done from the quasi-polite and naive standpoint of acceptance of the official goals.

Those wanting to resist must show the policies for what they are; methods for achieving objectives that would never be accepted by the remaining democratic functions of western societies. If all of this sounds too evil for your liking, consider that the alternative is the idea that the world really is run by spoiled toddlers. Not impossible but very much more unlikely.

Arjen Kamphuis is co-founder and Chief Technology Officer of Gendo. He studied Science and Policy at Utrecht University and worked for IBM and Twynstra Gudde as IT architect, trainer and IT strategy adviser. Since late 2001, Kamphuis has advised clients on the strategic impact of new technological developments. [An earlier version of this article can be read at http://gendo.nl/en/blog/arjen/whats-it-for-the-objectives-of-policies-systems#sthash.Fc66vqbc.dpuf ]

← The ‘Do-Something’ Myth in Syria
How Congress Overlooked NSA Spying →

5 comments for “Who Benefits from the Various ‘Wars’?”