President Obama and the mainstream U.S. press are blaming Russian President Putin for the breakdown in bilateral relations, but this simplistic view ignores the many U.S. government actions over the past two decades that have offended Moscow, as ex-CIA analyst Melvin A. Goodman describes.

In canceling his summit meeting with Russian President Vladimir Putin next month, President Barack Obama charged that the Russians have “slipped back into cold war thinking and a cold war mentality.” The mainstream media have picked up this theme and universally condemned recent Russian policies and pronouncements. Yet, there has been no discussion of U.S. missteps in dealing with Russia over the past two decades, particularly the actions of Presidents George W. Bush and Barack Obama.

The mishandling of America’s “Russian problem” began with the dissolution of the Soviet Union in December 1991. President George H.W. Bush had an excellent opportunity to “anchor” Russia to the Western security architecture, as George Kennan recommended in his containment doctrine of the 1940s, but instead Bush held President Boris Yeltsin’s Russia at arm’s length. 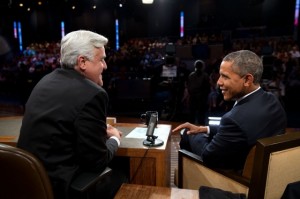 President Barack Obama criticized Russian leaders for slipping back into Cold War thinking during an appearance on “The Tonight Show with Jay Leno” at the NBC Studios in Burbank, California., Aug. 6, 2013. (Official White House Photo by Pete Souza)

Bush and his national security adviser, General Brent Scowcroft, believed that it was premature to buy into any notion of a “strategic partnership” with a Russia that “maintained imperial impulses.”  The Bush administration ignored the withdrawal of Russian forces from East Germany, Central Europe and the Baltics, and falsely accused Russia of encouraging an “ethnic explosion” in the Crimea. A major opportunity was lost to build on the arms control agreements of the 1970s and 1980s, and to exploit the opportunity for conflict resolution in the Third World.

President Bill Clinton left no legacy in foreign policy or national security policy, but managed to worsen Russian-American relations by expanding the North Atlantic Treaty Organization in order to gain support from large East European immigrant populations in such key states as Michigan, Ohio and Illinois for the 1996 election.

Secretary of State James Baker had previously told his Soviet counterpart, Eduard Shevardnadze, that the United States would not “leapfrog” over East Germany if Moscow withdrew its armed forces, but the introduction of the former East European states of the Warsaw Pact into NATO marked a repudiation of an important security commitment and a slap in the face to the Yeltsin government.

The most significant damage to the Russian-American relationship occurred during the administration of George W. Bush, whose international policies created the worst of all strategic worlds.  In December 2001, President Bush announced U.S. withdrawal from the Anti-Ballistic Missile Treaty, which had been the cornerstone of strategic deterrence and the arms control regime for 30 years. To make matters worse, Bush withdrew from the ABM Treaty in order to deploy a national missile defense that doesn’t work as well as a regional missile defense in East Europe, another perceived threat to Moscow.

Bush took NATO expansion to a new level by introducing former republics of the Soviet Union to the erstwhile anti-Russian alliance, including the Baltic nations of Estonia, Latvia and Lithuania. Bush’s expansion of NATO, abrogation of the ABM Treaty, and deployment of national missile defense not only angered Russia (and China), but created diplomatic problems among key West European members of NATO that opposed all of these policies and had a radically different perception of the threat environment from that of the United States. These policies also forged a better relationship between Russia and China, which was not in the best interests of the United States.

Finally, the Obama administration promised a “reset” in relations with Russia, but did very little to institutionalize bilateral relations. On his visit to Poland in 2011, President Obama announced additional cooperative measures on regional missile defense in East Europe as well as a step to base U.S. fighter jets in Poland, clearly a “leapfrog” measure if there ever was one.

The United States also gratuitously sends naval warships into the Black Sea as part of annual joint military exercises with Ukraine, which is offensive to Russia. The USS Monterey is particularly objectionable to Russia because its capabilities represent the first part of a plan to create a European missile shield.

Finally, the Obama administration has not worked to end the Jackson-Vanik Bill that restricts trade with Russia, and it took two decades to gain Russian membership in the World Trade Organization.

President Obama’s occasional boasts about the “indispensable” nation, and former Secretary of State Hillary Clinton’s pronouncements that the United States was “stronger than anyone, with more nuclear weapons than are needed many times over” did not help.  Meanwhile, the West European members of NATO are far more open to conciliatory gestures toward Russia than the United States has been.

Certainly President Putin has contributed to the current deadlock in the U.S.-Russian bilateral relationship, with his own streak of anti-Americanism and a ban on the adoption of Russian orphans by Americans. But both American and Russian leaders have contributed to the downward spiral, and there is no indication that the Obama administration has a sophisticated national security team in place to reverse current trends.

Matters of mutual interest where there is mutual agreement such as strategic disarmament, stopping the proliferation of weapons of mass destruction, and dealing with international terrorism remain on the back burner. Once again, Americans and Russians alike are being held hostage by the ineptitude of their leaders.

Melvin A. Goodman, a senior fellow at the Center for International Policy and adjunct professor at Johns Hopkins University.  He is the author of the recently published National Insecurity: The Cost of American Militarism (City Lights Publishers)and the forthcoming The Path to Dissent: The Story of a CIA Whistleblower (City Lights Publisher). Goodman is a former CIA analyst and a professor of international relations at the National War College. [This article originally appeared at Counterpunch and is republished with the author’s permission.]

← How US Hubris Baited Afghan Trap
No Reckoning over Agent Orange →

7 comments for “A Cold War Bias Toward Russia”