Hassan Rouhani’s inauguration as Iran’s new president revives hope for resolving the Iranian nuclear dispute, but continued belligerency from the U.S. Congress and Israeli leaders could dash the opportunity as could American misreading of regional trends, as Flynt and Hillary Mann Leverett explain.

As Hassan Rouhani was inaugurated Iran’s new president last weekend, there was self-referential optimism in Western policy circles about what his accession might portend. A substantial quorum in these circles sees Rouhani as perhaps someone with whom the West, to recall Margaret Thatcher’s 1984 assessment of rising Soviet leader Mikhail Gorbachev, “can do business.”

The traits these observers cite to justify their optimism, Rouhani’s deep knowledge of the nuclear file, his history of seeking creative diplomatic solutions, an easier rhetorical style for Westerners than outgoing President Mahmoud Ahmadinejad, fluency in English, are real. 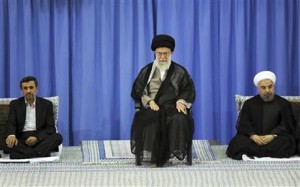 But the focus on them suggests that Western elites still look for Tehran to accommodate the West’s nuclear demands, above all, by compromising Iran’s right, as a sovereign state and signatory to the Nuclear Non-Proliferation Treaty, to enrich uranium indigenously under safeguards. This motivates them to interpret Rouhani’s election as evidence of Iranians’ growing weariness with sanctions and, by extension, with their government’s policies that prompt escalating international pressure on Iran’s economy.

If this assessment shapes Western policy toward Tehran after Rouhani’s inauguration, America and its European partners will not only squander yet another chance to realign relations with Iran. They will also ensure further and far more precipitous erosion of their standing and influence in the Middle East.

Such an interpretation, first of all, misreads who Rouhani is and what he represents. Rouhani is not an “ultra-Green” radical, out to deconstruct the Islamic Republic into some secularized alternative; properly speaking, he is not even a reformist. He is a conservative cleric, from what Iranians call the “modern right,” launched in the 1980s by former President Ali Akbar Hashemi Rafsanjani, Rouhani’s mentor and patron.

From a Western perspective, Rouhani’s diplomatic record might seem relatively accommodating; when he was Iran’s chief nuclear negotiator in 2003-2005, Tehran suspended enrichment for nearly two years. Rouhani’s approach has been criticized in Iran, for Western powers offered nothing significant in return for suspension.

In his presidential campaign, though, Rouhani strongly defended his record, arguing that, far from betraying Iran’s nuclear rights, his approach let it avoid sanctions while laying the foundation for subsequent development of its enrichment infrastructure. In his first post-election press conference, he made clear that the days when Iran might consider suspension “are over.”

Beyond misreading Rouhani, reigning Western narratives prevent Western powers from accepting and dealing with the Islamic Republic as a system. Alongside other indicators, Rouhani’s election should tell Westerners this system is more resilient than they recognize.

Unlike the Shah’s Iran, Mubarak’s Egypt, or Jordan’s Hashemite monarchy, the Islamic Republic doesn’t operate in service of the United States or any other foreign power. It has endured decades of U.S.-instigated military, clandestine and economic pressure, yet still produced better results at alleviating poverty, boosting health and education outcomes, and improving the social status of women than either the Shah’s regime or any of its neighbors, including American allies like Saudi Arabia and Turkey.

More fundamentally, the Islamic Republic’s core project of integrating Islamic governance with participatory politics continues to command the support of most Iranians living in their country. The election Rouhani won showed that the nezam (system) works as designed, letting candidates who accept its constitutional framework to compete vigorously by advocating divergent approaches to domestic and international issues.

Iranian voters, more than 70 percent of whom took part, acted like they believed they had meaningful choices and that their votes mattered. High-quality polls and the election results show that Rouhani (the only clerical candidate) won for good reason: he ran an effective campaign, did well in three televised (and widely watched) debates, and broadened his base through adroit politicking.

Rouhani’s inauguration might also remind Westerners of something they should already know: Iranian presidents are neither all-powerful nor powerless. The presidency is an important power center in a system that balances multiple power centers, e.g., the Supreme Leader as well as parliament and the judiciary, against one another. America and its partners should stop trying to play Iran’s public against its government, or one power center against others, and instead engage the Islamic Republic as a system.

This is especially important on nuclear matters, for, in Tehran, terms for an acceptable nuclear deal are set by consensus among the Leader, the president, and other power centers. After Rouhani becomes president, that consensus will continue to rule out surrendering Iran’s right to safeguarded enrichment; Western powers will still need to accept this right as the basis for an agreement.

Just as unwillingness to deal with the Islamic Republic as a system warps Western diplomacy with Iran, it also undermines the Western position in the Middle East more broadly. For this system’s animating idea, integrating Islamist governance and participatory politics, appeals not just in Iran, but to Muslim societies across the region. Iran is the only place where this idea has had sustained, concrete expression, but it is what Middle Eastern Muslims choose every time they are allowed to vote on their political future.

America and its European partners disdain coming to terms with this reality, in Iran and elsewhere. Disingenuous rhetoric notwithstanding, Washington still prefers secular authoritarianism, as in its support for the Egyptian coup, a naked effort to restore Mubarakism without Mubarak.

Alternatively, the United States works with Saudi Arabia to promote anti-Iranian, and, in the end, anti-American) takfeeri militants, as in Libya and Syria, witlessly disregarding the inevitably negative consequences for its own security. Either way, American policy systematically undermines prospects for moderate and popularly legitimated political Islamism to emerge in Sunni-majority Arab states.

Today, with Middle Eastern publics increasingly mobilized and their opinions mattering more than ever, this amounts to strategic suicide for America and its allies. To begin recovering its regional position, Washington must come to terms with the aspirations of Middle Eastern Muslims for participatory Islamist governance. And that can only start by accepting the uniquely Islamist and fiercely independent system bequeathed by Iran’s 1979 revolution,the legitimacy of which is powerfully affirmed by Rouhani’s accession.

Flynt Leverett served as a Middle East expert on George W. Bush’s National Security Council staff until the Iraq War and worked previously at the State Department and at the Central Intelligence Agency. Hillary Mann Leverett was the NSC expert on Iran and from 2001 to 2003 was one of only a few U.S. diplomats authorized to negotiate with the Iranians over Afghanistan, al-Qaeda and Iraq. They are authors of the new book, Going to Tehran. [This article originally appeared at AlJazeera.com.]

← Who’s to Blame for NSA Excesses?
How to Curb the Doomsday Club →

2 comments for “Adjusting to the New Iranian Reality”