Exclusive: During her seven years covering the Vietnam War, Beverly Deepe Keever broke through the male-dominated world of war reporting and nearly changed history with her discovery that Richard Nixon’s 1968 campaign was sabotaging the Paris peace talks, notes Don North in his review of her memoir.

Before the Vietnam War, female war correspondents were a rarity, but that conflict, nearly a half century ago, often put women covering war on par with their male colleagues and Beverly Deepe Keever set the bar high as she plunged into the bloody jungles and political intrigue of Vietnam. 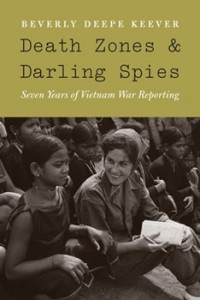 In seven years, she established a reputation as one of the hardest-working, resourceful and well-connected journalists working the war. She soon changed the attitude of old hands who resented women as war correspondents and thus helped create a respectful attitude toward women reporters from young male reporters like myself newly assuming the mantle of war correspondent.

Then known by her maiden name, Beverly Deepe, she was well prepared to land in Saigon. At 26, she held a masters degree in journalism from Columbia when she began her career in Vietnam with a seven-month “freelancing” stint. For those of us who don’t have the patience or time to wait around for a staff job, freelancing is the way to become an instant journalist by selling individual stories to editors and eventually hoping for regular assignments or a fulltime job.

There are many downsides to freelancing. Over half your time is spent pitching stories or seeking clients for your work. And the paychecks are often meager. But not having to meet regular deadlines freelancers can linger for long periods on interesting stories and choose ones they like and not those assigned by out-of-touch news editors back home. Beverly Deepe eventually earned reporting jobs with Newsweek, the Christian Science Monitor and other major news outlets.

Now 44 years after leaving Vietnam, she has written a memoir and perspective on her experiences, Death Zones & Darling Spies. It was worth waiting for. She saved every note and document from her years in country and they provide colorful and accurate recollections of her work.

From her earliest days, she established solid Vietnamese sources and through her interpreters interviewing villagers at the rice-roots gained an insight on the Vietnamese that few journalists matched. Her reporting on the failure of President Diem’s Strategic Hamlet Program, which had been praised by U.S. officials, would herald the fall of President Diem in a violent coup.

For a cash-strapped freelancer, Keever took a big financial risk hiring two Vietnamese journalists as part-time translators and fixers, but the advantages to her command of the news scene were enormous providing constant insights into the shadow world of Vietnam. Where she economized was in transportation, regularly hailing Saigon “Peugeot” taxicabs to take her through dangerous Viet Cong-threatened highways to where the action was.

When she got wind of an important battle looming at Ap Bac, rather than wait to hitch a helicopter ride she took a commercial taxi to the staging area of the Vietnamese Seventh Division. The gamble paid off as the battle of Ap Bac became a big news story and she filed more than 20 pages of text to Newsweek.

Keever also suffered heartbreak when some of her best stories were ignored by editors with poor judgment. With great enterprise she had obtained an exclusive interview with Buddhist monk Thick Quang Duc who was threatening to be the first monk to sacrifice himself as a protest against the Diem government. The story was sent to the London Sunday Express. Three days later the monk burned himself alive, electrifying world opinion. When she asked if the Express had used her work, an editor replied, “We didn’t use incendiary monk which proves what an idiot I am.”

Keever’s reporting was often resented at the U.S. Embassy in Saigon and she was the only American reporter not regularly invited to Embassy background briefings. However that was not always a negative. At one such backgrounder given by Ambassador Maxwell Taylor she was able to learn the gist of his remarks and reported them while the invited journalists were forbidden to identify the “U.S. official.”

Not being invited to such “boys’ club” briefings, which often morphed into hard-drinking, high-stakes poker games, saved her from massive hangovers and loss of wages to poker sharks.

Keever spent much of her time in the field with U.S. and ARVN combat forces and observed their high-tech war methods as well as their inability to distinguish friendly farmers from hide-and-seek guerillas. At the same time she reported widely on Vietnamese women’s role and established a rapport with powerful women like Madam Ngo Dien Diem and Mrs. Nguyen Cao Ky while writing in-depth stories on their lives.

On the eve of Tet in January 1968, she rode a motorcycle into the French rubber plantations near Bien Ho to interview top Viet Cong political cadres and guerillas, a scoop seldom accomplished during the war. She reported the chaos of the Tet offensive on Saigon and moved up to Hue where the U.S. Marines fought for almost a month to dislodge North Vietnamese regulars from the Citadel.

At Khe Sahn in the wake of Tet, she settled in to write over a half dozen reports at the peak of the siege. Her Khe Sahn stories were nominated by the Christian Science Monitor for a Pulitzer prize.

Perhaps the most important and enterprising of Keever’s work which didn’t get published by nervous editors at the Christian Science Monitor was her exclusive report on presidential candidate Richard Nixon’s encouragement of South Vietnam’s President Thieu to withhold a delegation to the Paris Peace talks until after the 1968 election — and thus sabotage President Lyndon Johnson’s effort to end the war.

The Monitor editors chose to kill the story claiming it lacked adequate evidence to charge Nixon with “the virtual equivalent of treason,” which is what later historians found was also President Johnson’s view of Nixon’s behind-the-scenes maneuver.

The story of what happened to Keever’s 1968 election story was recently uncovered by investigative reporter Robert Parry when he was searching through a once highly classified file at Johnson’s presidential library in Austin, Texas. Parry discovered that the Monitor had asked its Washington correspondent to run the information past the White House.

Keever’s material, which was based on South Vietnamese sources, reached President Johnson himself. He knew the story to be true because of national security wiretaps that he had placed on the South Vietnamese Embassy in Washington and on at least one of Nixon’s operatives.

So, on the eve of the Nov. 5, 1968, election, Johnson convened a conference call with Secretary of State Dean Rusk, Defense Secretary Clark Clifford and national security advisor Walt Rostow all of whom counseled Johnson against confirming Keever’s story for fear that Nixon might win anyway but with his presidency severely damaged by revelation of his treachery.

Asked by Parry if publication of her story and a Nixon loss in the election would have changed history, she replied, “I think the final outcome would ultimately be the same for Vietnam, with the Communists seizing control of the South. [But] the war would have been shorter and less bloody without the incursions and bombing in Laos and Cambodia.”

Keever faced other disappointments from her years in Vietnam. In 1990, Pham Xuan An, who had been her chief assistant and translator, was exposed as a Colonel in the Viet Cong and a master spy. Keever was shocked and surprised although she said An had not undermined the truthfulness of her dispatches. Still, she felt she had been betrayed and never again spoke to An who died in 2006.

In choosing her book title, Keever had checked the source of a quote by Mao that An had translated and found he had mistyped “daring spies” as “darling spies.” Keever reflected, “An indeed qualified as a darling spy, and years later I learned that Vuong (her second Vietnamese assistant) did too. Vuong worked for the CIA. I thought darling spies seemed like an ingenious, fitting label to describe both patriotic Vietnamese risking their lives to sleuth for foreign governments engaged on opposite sides of a cataclysm.”

3 comments for “Scooping ‘the Boys’ of Vietnam Press”