Official Washington’s pundit class has renewed its op-ed barrage for a more robust U.S. intervention in Syria, citing the need to protect human rights. But many people around the world don’t share that view of noble American motives, including the Afghans who have some experience, notes ex-CIA analyst Paul R. Pillar.

The latest in an escalating series of disagreements between Washington and Kabul as the U.S.-led military expedition winds down concerns customs duties. The coalition never paid any taxes on all the equipment it brought into Afghanistan over the past decade.

Under the terms of the agreement by which it did so, and similar to the rules tourists sometimes encounter when they bring an expensive camera or other gear with them to a foreign country, there was supposed to be paperwork to provide an accounting and an assurance that the same stuff that came in is also going out. 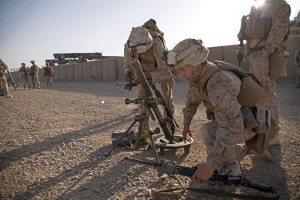 But most of the paperwork was never filed as coalition forces were busy ramping up their war effort. Now the Afghan government is saying that without papers, it wants a fine of $1,000 per truckload. Equipping a war that has gone on for this long involves a lot of truckloads, 70,000, according to the Afghans’ estimate.

This tiff should not have been surprising. The United States and its allies have made much of the idea that as they withdraw they are leaving behind a robust and independent Afghan government. We should expect any such government to drive hard bargains and to try to enforce rules.

Besides, the Afghan finance minister has a point when he says that much of the stuff brought into Afghanistan has been smuggled into the local economy with serious distortions as a result. More generally, this latest dispute is one more reflection of the inevitable frictions and resentments that arise from a sustained military occupation and its associated operations.

And yet, when something like this comes up there is always some annoyance as well as surprise on the American side. This is partly because of a repeatedly demonstrated tendency on the part of American policy-makers and the American public to underestimate those frictions and resentments before embarking on military expeditions.

It is also because, seeing our own motives as noble and unselfish, we expect the intended beneficiaries of our unselfishness to be grateful rather than to complain. This outlook was partly captured in a statement by the U.S. Ambassador to Afghanistan James B. Cunningham, who said, “We have not spent blood and resources, alongside our Afghan comrades, in pursuit of any other purpose than a stable Afghanistan that can provide for the security of its people, strengthen its institutions, and pursue the future which its people deserve.”

This is part of a recurring pattern in U.S. foreign relations and Americans’ outlook toward them: being confident about the goodness of our own motives, we expect that people should like us, thank us and cooperate with us. It is a sentiment that former President George W. Bush once expressed at a press conference when, musing about anti-Americanism, he said, “I’m amazed that there’s such misunderstanding of what our country is about that people would hate us. I am, like most Americans, I just can’t believe it because I know how good we are.”

One problem with this outlook is that many foreigners see U.S. motives as much different and less noble, no matter how much effort the United States puts into public diplomacy to convince them otherwise. Another problem is that even foreigners who take a more benign view of U.S. objectives still have to worry about their own interests, which are never identical with those of the United States.

Moreover, even when genuine gratitude is felt it tends to be, as a function both of psychology and of the imperatives of statecraft, short-lived. The operative question more often is, “What have you done for me lately?”

We need to bear all of this in mind before embarking on any initiative overseas, even for humanitarian or other praiseworthy reasons.  And we should not expect to win permanent friends and long-lasting gratitude no matter how confident we may be about our good intentions.

6 comments for “Contrasting Views on US Nobility”