It took the Spanish government an inexplicably long time, but it finally apologized last week to Bolivia for an extremely rare diplomatic faux-pas, denying access to its air space for the presidential plane carrying Bolivian President Evo Morales from an official trip to Russia on July 3.

Spain was acting on information from an undisclosed source that whistleblower Edward Snowden, who revealed global eavesdropping by the United States, was hidden inside the plane. France, Portugal and Italy also denied their air space, but quickly moved to correct the situation. Madrid’s denial was more serious, not only because Spain was slow to recant its position but because Bolivia’s presidential plane had to refuel in Spain’s Canary Islands on its way to South America. 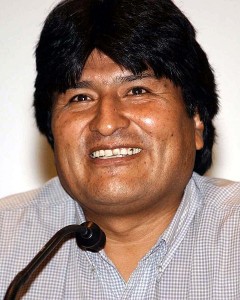 Further adding to the offense, the Spanish ambassador in Austria, where Morales was forced to land, tried to invite himself onboard “for coffee” to inspect the plane. Spain finally apologized and acknowledged that it acted inappropriately, but only after multiple international bodies had condemned the affair.

As we know now, Snowden wasn’t on board, and it’s hard to explain why anyone would think Bolivia’s head of state would risk stowing away Snowden, and even harder to figure out why European governments would deny use of their airspace, treating Morales as if he were a criminal.

The “rumor,” as Spain’s Foreign Minister JosÃ© Manuel GarcÃ­a Margallo described it, could only have come from Washington, which is exerting its diplomatic muscle to prevent South American countries from giving Snowden refuge. The Snowden case, as it relates to Latin America, is ultimately anecdotal, of course. It does however illustrate a profound hegemonic transition that is taking place in the region.

The multiple asylum offers Snowden has in Latin America, despite the public and no doubt private threats from the U.S., would have been unthinkable last century. They thus illustrate a new reality, as does the fact that Washington can’t do much about it.

The outcry over the blocking of Morales’s plane was reasonably monumental. The Organization of American States condemned it, as did South American countries individually. The U.S. and Canada abstained in the OAS, once again isolating themselves from the rest of the hemisphere.

For Spain the former colonial power and, until only a decade ago, the second most influential country in the region after the United States, it was a gross miscalculation especially because of its continuing political and economic ties to Latin America. Brazil, Argentina, Uruguay and Venezuela recalled their ambassadors from the involved European countries to pressure them to correct an unjustified slap on the face to Bolivia and the rest of South American countries.

A free trade agreement that Europe has been negotiating with the South American Mercosur bloc will be further delayed as mistrust grows. What the U.S. and Spain don’t seem to understand is that Latin America can no longer be bullied into submission.

Since Latin America’s independence from Spain in the 19th Century, and through most of the last century of U.S. dominance, the region has had basically two hegemonic overlords. However, over the past two decades, Latin America has matured into a powerful region and to varying degrees its countries have shed their politically dependence and economically instability, emerging from an era of dictatorship, war and gross human rights violations.

Latin America’s combined economies now are similar to Japan’s, about 70 percent of China’s, and about a third of the European Union’s. Though the region’s per capita spending of its nearly 600 million people is closer to that of Eastern Europeans, it is fast approaching developed economies’ consumption patterns. Regional economic growth outpaces the U.S., and in Europe’s case, especially Spain, by far.

The region also holds an enviable reserve of minerals, land, water and natural resources. A robust middle class is emerging with a rising number of high-income homes. In other words, Latin America is no longer about potential, but about reality. None of this has escaped China, Russia, India, Iran, some European countries and other middleweight powers.

However, the United States has been slower in recognizing this new reality, perhaps partly because it requires a new frame of thinking. Until the 1990s, Latin America was a proxy battlefield of the Cold War between Americans and Soviets, a strategic trophy rather than an investment opportunity. Now, it’s a must destination for global leaders trying to make inroads, form alliances and broaden relations with the region.

But the United States has been largely absent during Latin America’s formidable coming of age, while Spain has remained arrogant toward its former colonies. As a result, both are being displaced gradually as the region’s hegemonic powers by a rising Brazil, which moved ahead of the United Kingdom to become the world’s sixth largest economy.

Most Latin American countries hold Brazil as a model. But other countries also have been raising their profiles geopolitically and economically, including Mexico, Colombia, Chile and Venezuela. That is a diametrically different reality from just two decades ago when the region was still considered “America’s Backyard,” an infamous title it held for almost two centuries and is still used commonly in American policy-making circles.

This profound shift in relations is mostly due to the region’s own political and economic maturity. The U.S. and Spain have not evolved along with the region and their policies remain paternalistic, precisely as Latin American countries grow more assertive. Indeed, the disparate but well rooted Latin America’s coming of age is precisely what the U.S. and Spain, to a certain extent, had hoped for, as opposed to an unstable, economically weak and dependent region.

Since the end of the Cold War, the U.S. largely refocused its interests elsewhere, especially on the Middle East after the 9/11 attacks. As a result the U.S. gradually lost leverage over much of the continent.

Now, Venezuela, Ecuador and Bolivia are happy to greet Snowden not just to stick it to Washington, but because there is very little the U.S. can do to retaliate in those countries. The U.S. government has few bilateral ties with those countries, and even trade preferences are little incentive. So, Snowden continues to search for a way to reach Latin America from Russia.

Ultimately, the best response for Washington may be for both Republicans and Democrats to rethink their ideological approach toward the region and to regain influence through positive and pragmatic relations, not idle threats. The economy remains the best vehicle to achieve that, not on U.S.-imposed terms, but based on mutual interests.

The nations of Latin America have no intention of ever being the obedient pupil again. The region will continue evolving under Brazil’s leadership and seek its own path, which will be heavily influenced by countries like Venezuela, Ecuador, Argentina and Bolivia nations that Washington insists on antagonizing.

As for Spain, its options are even more limited and were damaged by its exposure as a subservient pawn in Washington’s game of capturing Snowden. Much of Spain’s economy derives from its multinational presence in Spanish-speaking Latin America. However, it may soon be the case of Spain’s former colonies helping their ailing European relation.

← On the Death of Helen Thomas
Squeezing Labor Costs Everywhere →