President Obama says he welcomes a vibrant debate on government secrecy and surveillance, but he then punishes the people who provide information that could make such a debate meaningful. The mainstream U.S. news media also shows little regard for these brave truth-tellers, says Lawrence Davidson.

In a July 8 editorial, the New York Times described the issue of National Security Agency (NSA) spying on Americans as one of “overwhelming importance” worthy of national debate. Noting that President Obama said he welcomed such a debate, the Times then pointed to a core problem: “This is a debate in which almost none of us know what we’re talking about.”

It turns out that everything about the NSA surveillance operation is “classified” and therefore done in secret. As a result there is no public access to the information needed for a debate. At least that was the case until “leaker” Edward Snowden risked all to tell the American public and indeed the whole world about it. 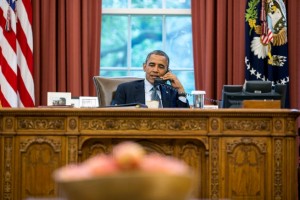 Thus, the public now knows that all the legal justifications for NSA operations are themselves secret. For instance, there is the Foreign Intelligence Surveillance Court, originally created by Congress to judge the legitimacy of government requests for wiretaps but it also operates under extreme secrecy. According to the Times, this court “has for years been developing a secret and unchallenged body of laws” that now go far beyond its original mandate. Yet the process of the court’s runaway empowerment has been beyond contesting.

As the Times puts it, there is a “complete absence of any adversarial process” which is, after all, “the heart of our legal system.” To demonstrate this, the editorial tells us “the government in 2012 made 1,789 requests to conduct electronic surveillance; the court approved 1,788 (the government withdrew the other one).

Were they all legitimate requests? It is impossible to know because “no one was allowed to make a counterargument” and the details of each request are secret, too. In other words, the court is an ever more widely used rubber stamp for a part of the government which in its apparently addictive pursuit of information is now literally monitoring us all. And, it is doing so with no public transparency and no traditional checks and balances.

The Times concludes that this situation constitutes a “perversion of the American justice system” which Congress, playing (in my view) the role of Dr. Frankenstein, has not been able to bring under control (after authorizing the system as a post-Watergate reform in the 1970s and then expanding it in the post-9/11 climate of fear).

“The [surveillance] court has morphed into an odd hybrid that seems to exist outside the justice system, even as its power grows in ways that we can’t see,” the editorial said.

It is at this point that the Times editorial falls short. Since the U.S. government’s surveillance court was operating in such secrecy, how is it the paper knows enough to denounce it?

Except for the annual release of the overall numbers of warrants issued or rejected (rarely), virtually all the information on the court’s rulings that is, the substantive nature of its work comes from someone (in this case Mr. Snowden) who leaked the information on which the Times now relies. Indeed, in the case of such secret government operations, it is always a “leaker” who performs the public service of shedding light on dubious and often dangerous official behavior.

Yet the Times has not come to Snowden’s defense. It has not noted his actions as praiseworthy or campaigned against the persecution he now suffers at the hands of the administration’s Justice Department. By not doing so, the newspaper improperly separates this story from the storyteller, and while the Times informs us of the high importance of the story, it leaves the storyteller to his fate.

What does this tell us about the Times’ editorial board? Perhaps that they lack the moral courage to defend the sources who make informed public debate possible. In this case, the Times won’t defend a man who arguably has done more to uphold American civil liberties than anyone since Martin Luther King Jr.

The Threat to Civil Liberties

The man who brought us the story of the NSA says he has had no second thoughts about telling the tale. On July 12, Snowden met with a number of human rights organizations at his temporary refuge in Moscow’s Sheremetyevo International Airport. Here are a few of the points he made:

–Through his contract work for the NSA, Snowden found that he “had the capability without any warrant to search for, seize, and read your communications. Anyone’s communications at any time. That is the power to change people’s fates.”

–Snowden also concluded that the daily use of this capacity by the NSA was a “serious violation of the law. The Fourth and Fifth Amendments to the Constitution of my country, Article 12 of the Universal Declaration of Human Rights, and numerous statutes and treaties forbid such systems of massive, pervasive surveillance.”

–“My government [U.S.] argues that secret court rulings, which the world is not permitted to see, somehow legitimize an illegal affair.  . . . The immoral cannot be made moral through the use of secret law.”

–Appalled by this situation, Snowden took to heart the 1945 Nuremberg principle that says, “Individuals have international duties which transcend the national obligations of obedience. Therefore individual citizens have the duty to violate domestic laws to prevent crimes against peace and humanity from occurring.”

–Having concluded that the NSA’s real and potential secret access to the communications of almost every American, and a growing number of non-citizens, was criminal in nature (perhaps totalitarianism in the making), he leaked the classified information that would bring the NSA’s activities into public view. “That moral decision to tell the public about spying that affects all of us has been costly, but it was the right thing to do and I have no regrets.”

The U.S. government, which has pursued Snowden as a traitor and criminal, did not take well to these public statements. The White House accused Russia of providing Snowden with a “propaganda platform,” and it is reported that President Obama got on the telephone with Russian President Vladimir Putin to express his displeasure.

No substantive attempt has been made by U.S. officials to publicly engage the issues raised by Snowden’s revelations. President Obama has followed his by now usual path of using positive words (I welcome a debate on secrecy) and then pursuing policies that blatantly contradict them (making Snowden’s life miserable and threatening reprisals against any country that helps him).

It is the U.S. government that is telling other countries to “follow the rule of law” (that is, U.S. law) and help capture Snowden. He illegally divulged classified information and that is all there is to it. End of discussion.

The fact that the NSA and other U.S. “intelligence” agencies may be acting beyond the law, both domestic and international, is apparently not open for discussion. The fact that it was President Obama who refused to prosecute blatant criminal behavior that occurred during the George W. Bush administration seems all but forgotten.His decisions to go after Snowden and to show no mercy to Pvt. Bradley Manning say that this President is perfectly willing to use double standards. There will apparently be no serious debate on this fact either.

In the face of actions of men like Edward Snowden, the Obama administration has sought to crack down on other potential “leakers” throughout the government. As part of an effort titled the Insider Threat Program, the majority of federal agencies, not just ones dealing with classified material, have been instructed to watch out for potential “leakers.”

Classes are being conducted to instruct many federal workers in the telltale signs allegedly given by people who might divulge information. This has the potential to set off a witch hunt, and so we can ask, how many careers will be ruined through the misuse of this program?

As Edward Snowden had hoped, his revelations have raised public awareness of the massive gathering of information by the government. However, it is unclear whether this heightened awareness translates into significant public disapproval of this surveillance activity. There have been various polls taken and they are not consistent.

For instance, a July 10 poll by Quinnipiac University reported that by a margin of 45 percent to 40 percent Americans believe “the government’s antiterrorism efforts go too far, restricting civil liberties.” It also reports that 55 percent characterize Snowden as a “whistleblower” and not as a “traitor.”

On the other hand, a June Washington Post – Pew Research Center poll said 56 percent of Americans considered the NSA accessing of telephone records of millions of Americans through secret court orders “acceptable” while 41 percent called the practice “unacceptable.”

Such divisions of opinion are unlikely to inspire Congress or the Obama administration to change the situation. The numbers suggest that Americans, including progressives and liberals, do not really feel threatened by the massive spying, even if some of them find it problematic. Many suppose it is only the “subversive types” who have something to fear. They do not understand how easy it is for the bureaucrats to expand categories of “suspect” behaviors.

It also should be noted that, as described by the New York Times, the prospective national debate is far too limited in scope. As it is evolving it concentrates solely on the intelligence-gathering activities of the government in its efforts to forestall terrorism. No one is discussing whether there are other strategies available in the “war on terror” that might make massive spying unnecessary. There are such alternatives.

As I have suggested in other recent analyses, terrorism is largely stimulated by U.S. foreign policies in regions such as the Middle East. Those policies, in turn, are largely the products of the inordinate influence of economic and ideological lobbies. Change foreign policy and you can substantially reduce the risk of terrorist attack.

In doing so, you eliminate the alleged need for massive government spying. So, are you concerned about the erosion of civil liberties by a government that feels compelled to spy on you so as to make you safe? If so, why not have a national debate about the nature of our foreign policies and the influences behind them?