President Obama has alienated much of his liberal base by coming across increasingly as a toady to the Establishment, with his defense of drone strikes, his embrace of the surveillance state and his prosecution of anti-secrecy whistleblowers, as Lawrence Davidson explains.

Context One: It is 1971 and the United States is mired in a losing war in Vietnam. Thousands of young American soldiers are coming back to the U.S. in coffins or physically and psychologically maimed. Scenes of war can be witnessed nightly on the evening news.

In the midst of this mayhem the American military analyst Daniel Ellsberg gives the New York Times a copy of a classified analysis of the war entitled, “United States – Vietnam Relations, 1945-1967” aka the “Pentagon Papers.” The Nixon administration then sought to prevent the publication of this report through a court injunction. Ultimately the Supreme Court overturned the injunction in a 6-3 ruling that favored the public’s right to know. 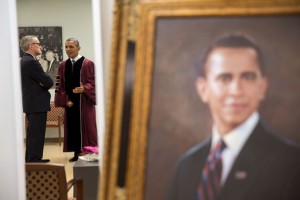 President Barack Obama is reflected in a mirror as he talks with Chief of Staff Denis McDonough prior to participating in the commencement ceremony at Morehouse College in Atlanta, Georgia., May 19, 2013. A painting of the President stands in the foreground. (Official White House Photo by Pete Souza)

The government also attempted to prosecute Ellsberg under the 1917 Espionage Act for releasing classified information to the public. That was thrown out of court because in making their case, government agents had gathered information through an illegal wiretap.

Subsequently, the media widely covered the Pentagon Papers and its demoralizing description of how the U.S. was fighting the war. It can be argued that this reporting helped turn the tide of public opinion against the slaughter in Vietnam.

Context Two: It is 2012-2013 and the United States is waging a “War on Terror.” This is the result of highly destructive terrorist attacks that occurred a dozen years earlier on September 11, 2001. Both these attacks, the lies and misplaced aggression of the Bush administration that followed, and the skewed media coverage over the intervening years, have sensitized the country to the issue of security.

In this environment the government was able to put in place legislation such as the Patriot Act that allows it to, among other things, broadly increase its powers of surveillance both of American citizens and foreigners, and to develop (with the aid of Israeli companies) a secret, massive information gathering program, code named PRISM, and operated by the National Security Agency (NSA).

It is also within this environment that a series of whistleblowers revealed to the public both the brutal nature of U.S. warfare in Iraq, Afghanistan and elsewhere, and the widespread spying regime evolved by the American government. Many of these whistleblowers have been charged with felonies and labeled traitors.

Between 1971 and 2012-2013, a lot has changed. However, the seminal difference is that in 1971 a good number of American citizens were being traumatized by the death and maiming of their relatives in a losing war that was publicized in a relatively objective way. In 2012-2013 that factor is missing because the “War on Terror” does not entail a military draft, has resulted in relatively few U.S. casualties, and is brought to the American people by a managed media.

This allows the public to assume what is, in truth, its “normal” default position: an everyday indifference to national government behavior. The general citizenry is at once uninterested in what the federal government is doing as long as they feel no immediate negative impact (this is particularly true of foreign policy), and naively ready to accept the government’s protestations that it is acting in their best interests.

Thus, it is no doubt true that heroes (and indeed they are heroes), such as Pvt. Bradley Manning and NSA employee Edward Snowden, decided to release massive amounts of secret government data in order “to make their fellow citizens aware of what their government is doing in the dark.”

However, what the historical record suggests is that, under most circumstances, only a minority of the general population will care. Thus, in the case of the United States, the effectiveness of whistleblowers may be more successfully tested in the law courts wherein meaningful judgment can be rendered on the behavior of the other branches of government, than in the court of public opinion.

However, this judicial arena is also problematic because it depends on the changing mix of politics and ideology of those sitting in judgment rather than any consistent adherence to principles. In 1971 judicial judgment went for Ellsberg. In 2013, men like Manning and Snowden probably do not have a snowball’s chance in hell.

The existence of men like Manning, Snowden and a handful of others demonstrates that there are employees of the government who have a superior sense of morality as well as the courage to act on their principles. However, the numbers are very small and they are invariably considered as dangerous mistakes within the system. What of the rest of the government’s personnel?

It is important to understand that the vast majority of government employees do not act, except in the most abstract and idealistic way, as citizens of the United States. They are much more immediately, if you will, citizens of the bureaucracies within which they are embedded. This is not an unusual situation.

People tend to identify with their local community and for some this may include a strong identification with their place of employment. Also, bureaucracies are notable for setting their own rules and enforcing them as if they were forms of law. Employees are regularly “oriented” to their bureaucracy’s institutional worldview.

At one time the union movement provided a potential check to this process because class identity was a viable competitor to bureaucratic identity. But the union movement within the United States is very weak. Particularly within secretive organizations such as the CIA or the NSA, competitive points of view are carefully weeded out.

Simultaneously, the value set on loyalty to the organization and its rules is very high. Such organizations come first, even before family and friends.

Even most elected politicians are fated to become “organization men or women” wherein their first loyalty lies not with the electorate or the Constitution, but to their political parties. If they are part of the “select” group of senators and congresspersons associated with the intelligence agencies they will absorb their secretive orientation as well.

Take Senator Diane Feinstein, D-California, who is head of the Senate Intelligence Committee. She has insisted on the need and the worth of massive spying by the NSA whereby the “megadata” of almost everything that goes through the Internet, and a lot that goes through the phone lines, is collected and stored, placing all content in a state of ready availability to the government if it chooses to look at it.

She and others like Director of National Intelligence James Clapper claim that this enormous gathering up of personal data has helped “foil multiple terrorist plots” against Americans and others. Those who have made public this secret process are, according to Feinstein, “traitors.”

In a real sense, Feinstein has metamorphosed into the loyal citizen of a bureaucracy that has relegated to itself the right to define both security and the public’s need to know. It does not appear to concern Feinstein that this bureaucracy is determined to function in a way that will allow no viable accountability to anyone beyond its own community.

In contrast to Feinstein, William Binney, former head of the NSA’s global digital data program, claims that having such a huge data base has meant the information overwhelms the analysts, causing the secret PRISM program to become “dysfunctional.”

Perhaps that is why a few in the Senate, like Mark Udall of Colorado, say that they are not “convinced that the collection of this vast trove of data has led to disruption of plots against the U.S.” Thus the “protecting the American people” justification is debatable.

One of the best examples of the conversion of an American from a servant of the citizenry to a servant of the government bureaucracy is President Barak Obama. As Glenn Greenwald points out, during President Obama’s 2008 campaign “openness and transparency” were central issues.

Obama denounced President George W. Bush’s regime as “one of the most secretive administrations in our nation’s history,” and added “it is no coincidence” that such a secrecy-obsessed presidency “has favored special interests and pursued policies that could not stand up to the sunlight.” He vowed: “as president, I’m going to change that.”

To that end he pledged to protect whistleblowers and called them, “the best source of information about waste, fraud, and abuse in government,” saying that “such acts of courage and patriotism . . . should be encouraged rather than stifled.”

Then he won the 2008 election. All of a sudden his constituents ceased to be the voters and became instead institutionalized aspects of the government system: the bureaucracy, the Democratic Party and a host of special interests. Thus, it did not take long for his tone to change.

Surrounded now by bureaucrats and party men whose devotion was to something other than the Constitution, the massive invasion of privacy represented by the vacuuming up of all information available on the Web became “necessary for national security and well within the bounds of the law.”

That is, the Bush-era laws that Obama once deplored. Now Obama is prosecuting the whistleblowers and protecting Bush-era criminals.

This metamorphosis into participants in an amoral system seems to be the fate of most men and women elected to national office. They join an organization assumed wiser then the citizenry because it knows more than they do and, more often than not, it does its learning in secret, clandestine ways.

Notions such as transparency and the behaviors of whistleblowers, which sounded so right on the campaign trail, now take on opposite connotations in the environment of bureaucracy. Principles that once were worthy of protection now must be “balanced” against procedures and policies too valuable to be exposed to daylight.

This is a standard scenario for the erosion of the rights, ideals and principles that make a democracy worthy of its name. As Thomas Drake, another whistleblower, recently put it “What does the NSA need with a 100 million phone records? We are losing the foundation of innocence until proven guilty. The assumption of innocence no longer exists in a surveillance state.”

Neither does a Constitution with a Fourth Amendment. Neither does habeas corpus or due process. All of those are things of value in the world of democratic men and women. In the world of the National Security Agency, they are all conditional to the needs of a system with very different rules.