Exclusive: Very few participants in the mass slaughters across Indochina in the 1960s and 1970s have faced meaningful accountability, whether in Washington, Vietnam or Cambodia. Another Khmer Rouge official, Ieng Sary, escaped justice when he died of natural causes while on trial, as Don North reports.

You may have missed the news that Ieng Sary, the former foreign minister and co-founder of the murderous Khmer Rouge in Cambodia, died recently while on trial for his role in the deaths of an estimated 1.7 million Cambodians. They died of starvation, torture, illness and execution as they labored in the slave camps of the Khmer Rouge between 1970-74.

By dying of a heart attack at age 87, before he could be found guilty of his crimes, Sary escaped punishment and even seizure of the fortune he stole while in power. The tribunal, which has cost $173.3 million to date, is  run by the United Nations, but controlled by the ex-Khmer Rouge dictator of Cambodia, Hun Sen. 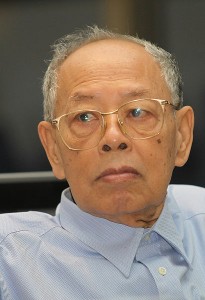 Most Cambodians consider the so-called “war crimes tribunal” a mockery of justice.  Hun Sen, the Prime Minister for 28 years, has openly opposed additional indictments of former Khmer Rouge, which is not surprising considering that the current Defense Minister, Interior Minister, Finance Minister and thousands of Army Generals and provincial governors are all former Khmer Rouge.

In late March, Ieng Sary passed into the other world in a cremation ceremony in Malai, once the Khmer Rouge base in remote northwestern Cambodia. My friend Jim Pringle, a former Reuters war correspondent in Vietnam and Cambodia, was the only foreign journalist present.

Sary’s widow Ieng Sirth, who had, like her husband been a founder of the Khmer Rouge, wept bitter tears on her husbands coffin before the flames where ignited. “Papa, please rest in peace,” she cried out as Buddhist monks in saffron robes chanted funeral prayers. The monks capacity for forgiveness is remarkable given that Sary targeted thousands of monks for death during his massacres.

In a sermon at the graveside, one of the monks remarked, “Nobody can take their wealth with them to the next world.” Sary is reputed to have accumulated a large fortune during his days of power through the mining of rubies and sapphires and logging hardwood timber. Reparations and distribution of his ill-gotten gains to families of Khmer Rouge victims was planned to take place after he was found guilty in the tribunal. Now without a guilty verdict, it is reported Sary’s son living in Hong Kong will inherit the fortune.

Pringle was invited to light incense at Sary’s coffin. “I was reluctant to do so,” recalls the culturally sensitive reporter, “but finally for the sake of protocol did so while expressing the hope that in his next life Ieng Sary would be a better person.”

Let us sincerely hope so.

Don North is a veteran military journalist who covered conflict in Vietnam and Cambodia and has recently returned from visiting Cambodia.

← A British Precursor to Snowden Case
Ahmadinejad Won, Get Over It! →