Exclusive: Many Americans, particularly the young, are angry over government spying — and are cheering on leakers who release “secret” documents. By taking the “establishment” side of this debate, President Obama risks discrediting government just as it is needed on global warming and other critical issues, writes Robert Parry.

President Barack Obama, known for preferring thoughtful accommodation to tough-minded confrontation, finds himself caught in a political quandary that could have dire consequences for the world’s future.

His dangerous dilemma is this: the planet is facing a rising tide of existential threats from widening income inequality to life-threatening global warming that require coordinated and aggressive responses from nation states and particularly the United States. But, simultaneously, his support for expanded government surveillance and national security secrecy is undermining trust in government. 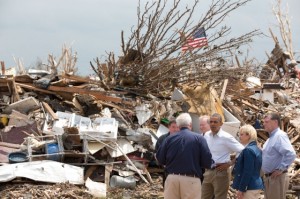 President Barack Obama tours tornado damage in Moore, Oklahoma, on May 26, 2013. The giant tornado represented the kind of extreme weather that scientists say the world can expect as human activity continues to heat up the planet. (Official White House Photo by Pete Souza)

So, just when the people need government the most to literally save the world government is giving them more reasons to reject government. It is a moment when Obama’s proclivity for careful political calibrations adds to the danger.

If he doesn’t move quickly and decisively to let American citizens in on as many of the government surveillance secrets as reasonably possible and dial back the dragnet on people’s personal information he risks playing into the hands of anti-government extremists like the Tea Party who are now casting themselves as the protectors of America’s constitutional rights.

That is as much a masquerade as the Tea Party’s Revolutionary War costumes, since Tea Partiers voted overwhelmingly for George W. Bush and other Republican officeholders who were instrumental in vastly expanding the surveillance state.

It was Bush who presided over the 9/11 intelligence catastrophe and then overreacted by launching ill-conceived wars overseas and authorizing a massive expansion of government surveillance against the U.S. population. Indeed, the current law, which is facing criticism for allowing the storage of huge amounts of data on phone calls, represented an intervention against Bush’s even more breathtaking intrusion on civil liberties, the notion that a President could order wiretaps on electronic communications without a warrant.

Though many Tea Partiers now criticize Bush as a big-government Republican, very few voted for Al Gore or John Kerry, both of whom have a much greater respect for constitutional rights than Bush ever did. The Tea Partiers’ new-found love of American “liberties” arose at a politically convenient moment, after the first African-American president took office.

Since its emergence in 2009 — to demand “our country back” — the Tea Party has represented just the latest branding of the white supremacist wing of U.S. politics, one that traces back to the nation’s Founding when Anti-Federalists feared that the Constitution’s concentration of power in the federal government would ultimately doom the South’s lucrative industry of slavery.

The United States has lived with different phases of this white supremacist movement, from the pre-Confederates (opposing federal power from the Constitution’s ratification in 1788 to the start of the Civil War in 1860) to the actual Confederates (during the Civil War) to the post-Confederates (from after the Civil War through the decades of Jim Crow and racial segregation) to today’s neo-Confederates with their racially tinged insults directed at Obama, their attempts to restrict voting rights of minorities and their angry opposition to immigration reform.

The common thread of this movement has been racism and the parallel fear that the federal government, when representing the nobler instincts of the American people, would act against slavery, segregation and white supremacy.

While libertarian extremism, if ever made national policy, would lead to economic, environmental and social disasters, libertarians have struck a chord, especially among young Americans, in also opposing government intrusions on personal freedoms. Libertarians reject laws against drug use; they object to national security surveillance; and they criticize excessive U.S. spending on the military and warfare.

Thus, Obama’s failure to significantly roll back Bush’s national security excesses and indeed his expansion of some such as the use of lethal drones has played into the hands of his libertarian critics, including Tea Party favorite, Sen. Rand Paul, R-Kentucky. Obama may think that he has charted the reasonable middle course between security and privacy, but his moderation is alienating and annoying many voters, especially the idealistic young.

Granted, Obama has faced a difficult set of choices. Even his rather modest steps during his first weeks in office, such as banning torture and releasing some of Bush’s legal memos that had justified torture, drew sharp criticism from Official Washington’s neoconservatives and right-wing pundits who had marched in lock-step with President George W. Bush and Vice President Dick Cheney during their “war on terror.”

Obama’s plan to close the Guantanamo Bay prison elicited more vociferous opposition in Congress and on the Right, with the House and the Senate restricting the President’s range of action. Obama also gets blamed whenever a terrorist strike occurs, even if the death toll is a small fraction of the carnage of 9/11, such as the attack in Benghazi, Libya, and the Boston Marathon bombings.  Plus, the Right’s sudden ardor for civil liberties only has emerged as those values have achieved some partisan value.

Historically, there are some similarities between how today’s neo-Confederates are exploiting the public’s concerns about intrusions on liberties and how one of the earliest “pre-Confederates,” Thomas Jefferson, advanced his political fortunes by attacking the Alien and Sedition Acts passed in 1798 by the Federalists under President John Adams.

The acts were a response to radical domestic unrest inspired by the French Revolution and to the growing resistance privately encouraged by Vice President Jefferson to the centralized powers contained in the U.S. Constitution. Those powers were a bane to Jefferson and other Southern plantation owners who feared that a strong central government would lead inexorably to the abolition of slavery.

Jefferson went so far as to secretly collaborate in a threat from Kentucky to secede from the Union, what some historians have called a possible act of treason, though Jefferson’s  hand was not publicly revealed at the time. Then, after Jefferson gained the presidency in 1801 in part by campaigning against the Alien and Sedition Acts he turned around and prosecuted some of his critics under the acts before they expired.

In a similar display of hypocrisy, Jefferson called for restricting federal powers to only those specifically “enumerated” in the Constitution, but he violated that principle in purchasing the Louisiana Territories from France, a power not enumerated in the Constitution. He also expanded the executive power to make war by dispatching the Navy against the Barbary pirates without prior congressional authorization.

After leaving office, Jefferson corresponded with his successor and ally James Madison about what to do with Federalists who objected to the Jefferson-Madison desire to go to war with Great Britain in 1812.

As historians Andrew Burstein and Nancy Isenberg write in Madison and Jefferson, “Jefferson called for different measures in different parts of the country: ‘A barrel of tar to each state South of the Potomac will keep all in order,’ he ventured in August [1812]. ‘To the North they will give you more trouble. You may have to apply the rougher drastic of hemp and confiscation’ by which he meant the hangman’s noose and the confiscation of property.”

In other words, Jefferson, who has gone down in school history books as a great defender of freedom of speech, urged the sitting President of the United States to “tar” war dissenters in the South and to hang and dispossess dissenters in the North.

Other of Jefferson’s policies, particularly his advocacy of state “nullification” of federal law, encouraged Southern states to resist federal power that they feared would eventually doom slavery. In doing so, Jefferson did more than almost any other Founder to set the young Republic on its course toward a devastating Civil War.

So, while Jefferson the “pre-Confederate” hypocritically lambasted intrusions upon “liberty” by the Federalists in the 1790s, he was more than happy to violate the liberties of both his white political rivals and the black slaves who lived on his and other Southern plantations. [For more details, see Consortiumnews.com’s “Racism and the American Right.”]

Similarly, today’s Tea Partiers were mostly George W. Bush loyalists during his presidency in the first decade of the Twenty-first Century. Many were quick to accuse liberals and civil libertarians of being “soft on terror” when they raised objections to Bush’s counterterrorism policies, from torture to warrantless wiretaps.

Then, the Right’s mantra was that the government needed to do whatever Bush thought necessary to protect the American people. There was particular enthusiasm for “profiling” Arabs and other Muslims for special security attention.

Even today, as the Right has grown more critical of the surveillance state now that an African-American Democrat is in office some prominent conservatives, the likes of Sen. John McCain and House Speaker John Boehner, continue to endorse the aggressive use of data mining to detect possible “terrorists.”

However, the insurgent elements of the GOP and the Tea Party especially the libertarians rallying around Sen. Rand Paul have gained supporters among the ranks of the disaffected young by appealing to a growing resistance to the national security bureaucracy and the surveillance state.

Repugnance over lethal drone attacks have merged with anger over the National Security Agency’s data collection of phone records and other personal information. Though President Obama can argue that he has reined in some of the abuses of President Bush overall reducing the levels of violence abroad and operating with more legal safeguards at home Obama finds himself viewed more as an avatar of this increasingly despised “Big Brother” apparatus than as a champion of the U.S. Constitution.

That may become a big political problem for Obama and the Democrats as they head into a challenging congressional election in 2014. Indeed, they could be facing a repeat of the “shellacking” they took in 2010 when many progressives sat on their hands to show displeasure with Obama’s failure to enact “single-payer” health insurance and his slow pace in ending Bush’s wars.

But an even greater danger for the world is that Obama’s continuation of violent counterterrorism polices (like drone strikes) and his embrace of surveillance-state secrecy (including harsh prosecution of leakers) make any arguments for a strong government response to such pressing issues as income inequality and global warming a much harder sell with many American voters.

Especially many of the young appear likely to fall prey to the libertarian argument that any expansion of government inevitably deprives you of your freedoms. Thus, the Right may gain the high ground in making the argument that Big Brother surveillance goes hand in hand with, say, environmental regulation to slow or reverse global warming. And that could mean the next Congress will have more climate-change deniers, fewer supporters for government spending on infrastructure, and more advocates for letting powerful corporations regulate themselves.

If President Obama hopes to avert that result, he must go beyond rhetorically welcoming a vibrant debate on the super-secret counterterrorism programs and actually give the public enough information so a viable debate is possible. He also would do well to lighten up on punishing whistleblowers.

← A Black American Fighting Fascism
How PBS Lost the Public →