Exclusive: The U.S. government wants to lock away Pvt. Bradley Manning for life because he released hundreds of thousands of classified documents that he believes revealed war crimes and other wrongdoing. But overlooked is how much damage over-classification does to the Republic, says Robert Parry.

I thought of Pvt. Bradley Manning when I recently received a response to one of my Freedom of Information Act requests to Ronald Reagan’s presidential library. I was seeking documents about President Reagan’s secret strategy of aiding Saddam Hussein’s Iraq in its war with Iran.

Reagan’s tilt to Iraq in the early 1980s while his administration also was winking at Israeli weapons sales to Iran was part of a clandestine U.S. approach to the region which generated huge profits for arms dealers while feeding sectarian violence and political animosities that echo to the present day. It seemed to me that it was way past time to know the full truth. 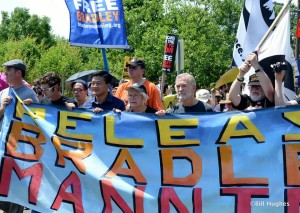 Protesters marching on June 1 in support of Pvt. Bradley Manning. One of the marchers was ex-CIA analyst Ray McGovern, whose face appears over the yellow ‘E’.

However, though many of the events in question are now more than 30 years old and thus are commonly thought to be readily accessible under FOIA the reality is that the U.S. government still makes seeing such documents extremely difficult.

The letter from the Reagan library said the archivists would not even begin to process my request for “128 months,” that is more than 10 years, and then the process would involve time-consuming declassification reviews in which various agencies with “equity” interests would each have to sign off, along with whoever the sitting president is.

And, were I to die or lose interest in the interim, the process would go back to square one, waiting for some other interested American citizen to put in a new request and starting the clock again. In other words, we might all be dead before these records will be open to the public.

There is an old saying that “justice delayed is justice denied,” but the concept also applies to historical accountability. History delayed can mean accountability denied.

Plus, there’s no guarantee that some hypothetical historian far into the future will fully understand what the documents mean once they are, hypothetically, released. Since the people who lived through the relevant era might have left the scene, references or details may not be understood. In other words, there’s a great danger that the history will be permanently lost.

Besides the loss of history, there is also a more immediate concern: If the American people don’t know what their government did and who did it they can be led down the same dangerous paths by the same people who created the dangers in the first place. On a geopolitical level, it’s a bit like one of those suspense stories in which the young heroine fleeing a serial killer is putting her misguided trust in the villain as he poses as a protector of her safety.

For instance, if the American people had been allowed a full understanding of what George H.W. Bush had done as Vice President and President, would they have been so gullible to have allowed his eldest son to elbow his way into the White House? It was their misguided trust in the elder George Bush that bought Junior the benefit of the doubt. [See Robert Parry’s Secrecy & Privilege.]

Similarly, if the American people knew the complete story about the neocons who were credentialed by the Reagan administration including their role in Central American atrocities and their clever use of propaganda would the public have been so easily duped into the Iraq invasion?

Or, if they knew that Robert Gates was a behind-the-scenes figure in some of the scandalous operations of the Reagan era as much evidence suggests would they have trusted him as a Wise Man brought in to counsel leaders, such as George W. Bush and Barack Obama on wars in Iraq and Afghanistan? Would his “words of wisdom” be fawningly transcribed by U.S. journalists? [See Parry’s America’s Stolen Narrative.]

In other words, America’s overly classified history, which is locked away in government vaults for decades, is itself a threat to national security, not to mention an affront to anything close to a meaningful democracy. The hyper-secrecy also creates fertile ground for nutty conspiracy theories, further destabilizing the Republic.

So, the cavalier expression that I often heard in the 1980s when news executives grew bored with Iran-Contra and related scandals “oh, let’s leave that for the historians!” wasn’t just bad journalism; it was a threat to the nation and to the world.

To this day, Americans have gotten only glimpses of Reagan’s cynical policies in the Middle East. Snapshots have emerged from the Iran-Contra Affair, which exposed some of the clandestine arms shipments to Iran, and from a sworn affidavit by Howard Teicher, a staffer on Reagan’s National Security Council who disclosed some of the secret collaboration with Iraq.

But nothing close to the full history has ever been revealed and many conflicting assertions remain, such as whether the Iran side of this operation originated from treacherous Republican-Iranian contacts behind President Jimmy Carter’s back before Election 1980 and whether Teicher’s affidavit is entirely accurate. That is where my FOIA request came in.

Which brings me back to Bradley Manning whose trial for leaking government secrets is set to begin on Monday, with the prosecution seeking life imprisonment for the young private who is accused of aiding the enemy. Most fair-minded people would agree that some of Manning’s information was beneficial to the public’s right to know, revealing details of human rights violations and exposing corrupt government officials around the world.

However, the conventional wisdom within U.S. government circles and the mainstream news media is that Manning’s wholesale release of secrets to WikiLeaks endangered civilians who collaborated with American forces in Afghanistan and elsewhere and impaired U.S. foreign policy by revealing the frank opinions of American diplomats.

Yet, while it may be true although it remains unproven that some innocents were put at risk and that U.S. diplomacy has been made more complicated, Manning’s unauthorized release of hundreds of thousands of documents must be weighed against the U.S. government’s hiding of hundreds of millions of documents.

The simple truth is that the vast majority of those “secret” documents do not represent any reasonable threat to national security. And, to the contrary, the continued over-classification represents a clear and present danger to the Republic, both because secrecy undermines democracy and because ignorance makes voters vulnerable to deceptive politicians who, in turn, can inflict serious harm on the real national security.

So, when you hear someone condemning Bradley Manning for releasing government secrets, you might think about my attempt to go through the proper channels to see 30-year-old documents on U.S. policy toward Iraq — and being told that I’ll have to wait at least “128 months.”