Russia and the Obama administration have made some moves toward seeking a peace settlement in Syria, even as Russia bolsters its support for Bashar al-Assad’s embattled regime. But an obstacle has emerged as the deeply divided Syrian rebels balk at meeting with Assad’s representatives, ex-CIA analyst Paul R. Pillar notes.

Reasonable people can disagree on what to do about Syria, a problem with no good solutions, and particularly about what to do regarding aid to Syrian rebels. There ought not to be disagreement, however, on not letting the United States, a would-be benefactor, get pushed around or have its diplomacy subverted by the rebels, who are the supplicants.

Yet that becomes a possibility when we hear the head of the rebel Syrian National Coalitionthrow cold water on the peace conference that Secretary of State John Kerry and his Russian counterpart agreed to arrange and say that his group will withhold agreement to attend until it sees who from the Assad regime might be coming. 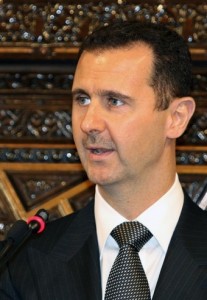 In a public statement at this week’s “Friends of Syria” meeting, Kerry linked the concept of increased aid to the rebels to any unwillingness by the Assad regime to participate in peace talks. One hopes he has conveyed a converse message in private to rebel representatives.

There would be nothing wrong with also making such a message public. It would be part of a consistent policy whereby U.S. decisions about aid to rebels would be governed by the willingness or unwillingness of each side to negotiate and to negotiate seriously.

Amid all the talk about Assad having to go, there is no reason from the standpoint of U.S. interests to consider his departure an end in itself. It is at most a means to achieve other ends, having to do with instability or extremism in Syria.

An even more fundamental distinction is between objectives, either ultimate or intermediate, and diplomatic modalities such as who exactly will be sitting at a negotiating table. In general, regardless of the objectives, including parties is better than excluding them, which only makes them more likely to be spoilers. This principle goes for outsiders, including Iran.

As for the insiders and specifically the Assad regime, it would be hard to label as peace talks any process in which that regime was not fully at the table in the form of representatives of its own choice. Moreover, think of the incentives, to talk or to fight, to cooperate or to spoil, of the regime’s supporters.

A wide range of possibilities for a new Syria would share the common feature of not having Bashar Assad in charge. But those possibilities can be very different from each other in terms of the ability of those currently supporting the regime to live useful lives in the new Syria, or to live at all.

If they do not believe their interests will be fairly represented in creation of a new order, they are more likely to see the only course as a fight to the death. Anyone who does not acknowledge that reality does not deserve assistance.