Very little sympathy is felt for Air Force personnel assigned to fire nuclear missiles that could end all life on the planet. But their grim, boring and existentially absurd job has eroded staff morale so much that their collapsing competence has added to the world’s risk, explains John LaForge.

Some of the Air Force’s self-styled nuclear “missileers”, sitting at launch controls in Minot, North Dakota, recently earned a “D” on their intercontinental ballistic missile firing (ICBM) skills. More than 10 percent of the Minot Air Force Base’s 91st “Missile Wing” was declared incompetent and was stripped of launch-duty clearances.

The Air Force removed 17 of Minot’s 150 missile launch officers in April, over what commander Lt. Col. Jay Folds called “such rot” that, according to The AP on May 8, “even the willful violation of safety rules, including a possible compromise of launch codes, was tolerated.” 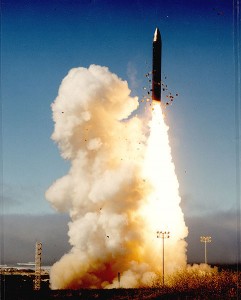 Air Force commanders told The AP they were concerned about an “attitude problem” among the ultimate bomb scare command. The Air Forces’ two-person crews work three-day shifts in underground Launch Control Centers and are supposed to be constantly at-the-ready to fire the 10 Minuteman IIIs under their control. Minot AFB is in charge of 150 ICBMs, 15 “flights” of 10 missiles each, with one launch control center for each flight.

Another 150 are on alert in Wyoming and 150 more out in Montana. All 450 of the relics are armed with a 300-kiloton “W-87” warhead. Three-hundred kilotons is a magnitude equal to 18 times the destruction that incinerated Hiroshima in 1945 killing 140,000 people.

The Air Force put on its dress uniform in the face of the scandal. In May it announced it would retrain the incompetent nuclear triggermen and the commanders asserted to Congress that its H-bombs were secure.

Gen. Mark Welsh, the service’s top general, told the Washington Post, with deliberate irony one hopes, that Air Force officers sense that the land-based missile system “is a dying field.” And it’s a fact that everyone from President Barack Obama to the War Resisters League has called for the Bomb’s abolition. Gen. Welsh admitted to the press that there are “a limited command positions to which missile launch officers can aspire.”

Being stuck in dead-ended Air Force careers and posted in the wilderness of central North Dakota, Minot’s Cold War throw-backs, who call themselves “Roughriders” and “Vulgar Vultures” on their website, are trained to fire Minuteman III ballistic missiles at the sea (they can be re-programmed but are targeted on the oceans for “safety”) and, day after wind-swept prairie day, have absolutely no military function or purpose whatsoever.

It’s hardly surprising that their minds drift. Since they’re prepared to commit the bloodiest, most nightmarish crime in human history or imagination, the missileer’s principal pre-occupation must be to think about something else, anything else. Many work on graduate degrees. One launch control center I visited in December 1987 was decorated with Christmas lights.

The inevitable if not impending elimination of their useless rockets has to depress what’s left of the launch teams’ esprit de corps. Even their civilian commander, Pentagon chief Chuck Hagel, has signed onto a call by the group Global Zero to eliminate all the ICBMs and to eventually discard all nuclear weapons.

Of course Minot AFB has been demoralized by more than the nuclear war flunky scandal. In August 2007, three of its Colonels, a Lt. Colonel and dozens of low-level personnel were demoted or sacked after they allowed the fantastically dangerous loading and cross-country air transport of six nuclear-armed Cruise missiles from Minot to Barksdale AFB in Louisiana. Even if that astonishing action was covertly orchestrated by Vice President Dick Cheney for an attack on Iran that never materialized, the highly implausible but official cover story of mismanagement, rule-breaking and recklessness was an international humiliation for Minot.

Even Sen. Carl Levin, D-Michigan, who last week defended the Pentagon’s usurpation of authority to attack anywhere on Earth for the next 20 years, said about the nuclear arsenal last June, “The more weapons that exist out there, the less secure we are rather than the more secure we are.” [“Senator Urges Bigger Cuts to Nuclear Arsenal,” New York Times, June 15, 2012]

No wonder the Air Force missileers are lackadaisical about the apocalypse. There’s just no future in it.