Sometimes it seems that the humane thing to do with the Washington Post would be to counsel it on the advantages of corporate euthanasia. Then, with its faded glories of Watergate clutched to its chest, it could disappear from its embarrassing present in which the newspaper is disgracing whatever good it did in the past.

Yes, I know you could argue that even its Watergate fame was way overrated, that the newspaper missed the most important aspect of the scandal how it originated with President Richard Nixon’s frantic search for a missing file that documented his sabotage of the 1968 Vietnam peace talks, what President Lyndon Johnson privately had termed Nixon’s “treason.” 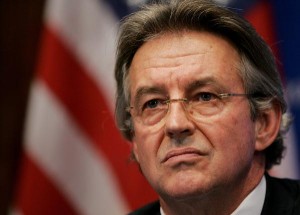 The Post’s misguided focus on the Watergate cover-up, rather than on the far more grievous underlying crime of extending the Vietnam War for four years, led to one of Official Washington’s silliest sayings: “the cover-up is worse than the crime.” [For details on the origins of Watergate, see Robert Parry’s America’s Stolen Narrative.]

But at least with Watergate, the Post’s editors along with reporters Bob Woodward and Carl Bernstein could be credited with keeping the pressure on so Nixon would face some accountability, a humiliating resignation. In effect, the Post helped nail this treacherous war criminal even if it was a bit like jailing Al Capone for tax evasion.

That, however, was then, not now. Over the past few decades, the Washington Post seems to have gotten nearly every big story wrong, most tragically the invasion of Iraq which the Post promoted on its editorial pages and failed to question in its news pages. Then, even as George W. Bush’s phony WMD case was collapsing, the Post turned its guns on former U.S. Ambassador Joseph Wilson for having the courage to explode one of Bush’s central lies.

Rather than show any journalistic integrity regarding its own massive failure to question the WMD case for war, the Post published a Robert Novak column that exposed Wilson’s wife, Valerie Plame, as an undercover CIA officer, thus destroying her career. But even that wasn’t enough. The Post’s editorial board spent the next several years repeating every ugly Republican talking point aimed at tearing down Wilson.

The key takeaway from the so-called Plame-gate Affair should have been that Wilson was correct in his description of his efforts in 2002, that he along with other U.S. representatives investigated and debunked one of Vice President Dick Cheney’s suspicions about Iraq trying to buy yellowcake uranium from Niger.

Yet, despite the U.S. intelligence community’s consensus that the Niger suspicions were false, President Bush shoehorned the allegation into his 2003 State of the Union speech as the so-called “sixteen words”: “The British Government has learned that Saddam Hussein recently sought significant quantities of uranium from Africa.”

After Bush’s speech, Wilson revealed, accurately, that the U.S. government knew those suspicions to be false. Wilson was also right when he complained that his truth-telling prompted a counterattack by the Bush administration to discredit him, which included leaking to the press the fact that his wife was a covert CIA officer involved with proliferation issues  (and whose office dispatched Wilson on the mission to Niger).

So, here was a public servant who had undertaken a difficult assignment to Niger and who tried to warn the U.S. government away from some bad information. Then, when President Bush tried to deceive the American people anyway, Wilson had the courage and integrity to get the real information to the public.

You might have thought that the Washington Post would want to defend such a person. Instead, the Post went to extraordinary lengths to disparage Wilson while Bush was still in office and has continued that ugly campaign literally to this day. In an op-ed column on Monday, the Post’s deputy editorial-page editor Jackson Diehl reprised the smears against Wilson in the context of discussing the Benghazi case.

With sarcasm dripping from his words, Diehl wrote: “Remember the scandal of ‘the 16 words’? If you do, you’ve probably been inside the Beltway too long, literally or figuratively. If not, the quick version is this: A former ambassador named Joseph C. Wilson IV charged in 2003 that President George W. Bush had included in his State of the Union address a (16-word) allegation about Iraq that his top aides knew to be false, that Saddam Hussein had sought to purchase uranium from Niger.

“Wilson then amped up the ensuing partisan uproar by claiming there had been a White House conspiracy to punish him by deliberately blowing the cover of his CIA wife. Most of what Wilson said was later proved to be grossly exaggerated, or simply false. But that didn’t stop Democrats and partisan media from devoting years to conspiracy-spinning and attempts to pin political and criminal responsibility on Bush, Vice President Dick Cheney or Karl Rove. Blustered Wilson: ‘It’s of keen interest to me to see whether or not we can get Karl Rove frog-marched out of the White House in handcuffs.’”

To buttress this renewed assault on Wilson, Diehl linked in the Post’s online edition to one of the quibbling editorials that he and his colleagues had published to disparage Wilson years ago. So, Wilson, a private citizen who was doing his civic duty both for the government and as a whistleblower for the public, was torn down and humiliated by the Washington Post for speaking truth to power.

But what, you might ask, happened to the Post editorialists who got snookered by Bush’s false WMD claims and helped bamboozle the nation into a disastrous and illegal war? Well, the answer is nothing.

Fred Hiatt and Jackson Diehl remain on the Post’s masthead as editorial-page editor and deputy editor, respectively, just as they did when they were flogging the Iraq War. They and other key news executives at the Washington Post faced no accountability for getting fooled about WMD and serving as propagandists for an aggressive war.

As disgraceful as that may seem to people who actually care about journalism, the Post’s malfeasance has been compounded by the fact that no one at the newspaper apparently sees anything wrong with continuing the Hiatt-Diehl obsession to destroy Joseph Wilson, whose family has already suffered enough for his attempt to set the factual record straight.

It also speaks volumes about the disappearing journalistic standards of the Washington Post that the newspaper would allow its deputy editorial-page editor to lead off a column by making fun of anyone who bothers to remember the circumstances behind the terrible Iraq War. Diehl may find it uproarious for some people to remember the fraud of Bush’s 16 words, but it is far more laughable in a very dark way that Diehl is still employed in a position of responsibility inside a news organization.

At this stage, however, the pattern of journalistic misconduct at the Washington Post has been so consistent for so long that the blame cannot be placed at the feet of a few editors. The entire newspaper is a disgrace to the principles of American journalism. [For more details on this topic, see Consortiumnews.com’s “Why WPost’s Hiatt Should Be Fired.”]