Exclusive: A half-century ago, religious clashes in Vietnam — leading to a dramatic photo of a Buddhist priest burning himself alive — shocked the U.S. government and drove it deeper into the morass of the Vietnam War, a confluence of religion and politics that remains relevant today, as war correspondent Beverly Deepe Keever explains.

The 40th anniversary of the withdrawal of American troops from the Vietnam War was recently commemorated, but ignored was the 50th anniversary of an incident that led to U.S. combat units being sent to the war zone in the first place.

That bloody event is probably not even recalled by the two Vietnam veterans now heading the Pentagon and State Department, Chuck Hagel and John Kerry, respectively. Yet it turned out to be an indelible turning-point in the history of the Vietnam War. And, a half-century later it still warns a nuclearized world about the power of organized religious groups and the perilous politics of regime change. 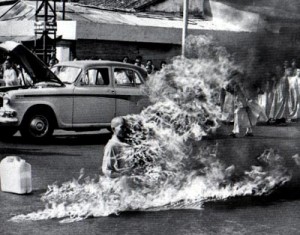 Sketchily reported at first, an initial 134-word wire story described seven persons killed when a grenade was thrown into a crowd of 3,000 in a Buddhist demonstration that was Communist-inspired, according to the Vietnamese government headed by President Ngo Dinh Diem, a Roman Catholic.

The bloodshed occurred on May 8, 1963, as religious followers heralding Buddha’s birthday began flying flags in Hue just as the Diem government began enforcing a long-ignored ban on displaying religious flags outside of religious organizations. Hue was the home of Diem’s brother, Archbishop Ngo Dinh Thuc, who had hoisted yellow-and-white Vatican flags earlier in the month while celebrating the 25th anniversary of his ordination as bishop.

Undergirding Buddhist grievances was the French-imposed Decree No. 10, which Diem had retained, labeling Buddhism as an association, rather than a religion, thus restricting the power, rights and flag-flying privileges of its followers compared to those of Roman Catholics.

Perched along the South China Sea 400 miles north of Saigon, and 50 miles south of the demilitarized zone with North Vietnam, Hue was a storybook city bisected by the Perfume River, where sampans glided for vendors selling a sweet brew concocted of lotus seeds. A key center of Buddhist scholarship, it served as the one-time royal capital of Vietnam that still glistened with ruby-colored citadels and Forbidden-City-styled Palace.

Saffron-robed Buddhist bonzes and others contested the government’s version of the Hue melee. They told of eight, not seven, deaths, including children, from an explosion, from a Catholic government official ordering troops to fire, and from armored cars crushing demonstrators. The killings were protested the next day by 10,000-plus Buddhist demonstrators in Hue.

Throughout the sultry summer, Buddhist protesters thrust Vietnam onto the world stage, and U.S. television screens, with a self-perpetuating chain reaction of fasting, sit-down strikes, student walkouts, mass meetings, news conferences, a plea to the United Nations and skirmishes with police. It was like a long-dormant volcano rumbling toward eruption.

Rumors circulated in Saigon that several Buddhist bonzes had volunteered to commit suicide by setting themselves afire to highlight their demands. On June 8, 1963, one elderly bonze, Thich (Venerable) Quang Duc told me, “To die is the only thing I want because the government is indirectly destroying the civilization of the Vietnamese people, which depends on the Buddhist culture.” I cabled these words in his last interview to Newsweek and the London Sunday Express.

Three days later, Quang Duc moved from a sedan, sat on a brown cushion dropped onto to a dusty road and was doused with gasoline by two other bonzes. Then he stretched his hands across his brown robe and lit a match.

“In a flash, he was sitting in the center of a column of flame, which engulfed his entire body,” and then he was still, recounted AP’s Malcolm Browne, who captured the suicide on film.

The burning-bonze photo horrified the world. Upon first seeing it, President John Kennedy exclaimed, “Jesus Christ!” He added: “No news picture in history has generated so much emotion around the world as that one.”

The U.S. support for Diem grew shaky. Kennedy, America’s first Catholic president gearing up for re-election the next year, was increasingly embarrassed by the protests alleging religious persecution from the U.S.-backed president of South Vietnam who was also a Catholic.

The result: regime change in Saigon. After years of U.S. support that began in 1954 under President Eisenhower, the Kennedy administration encouraged Vietnamese generals to overthrow Diem on Nov. 1, 1963.

“For the military coup d’etat against Ngo Dinh Diem, the U.S. must accept its full share of responsibility,” the Pentagon Papers documented in 1971. “Beginning in August of 1963, we variously authorized, sanctioned and encouraged the coup efforts of the Vietnamese generals and offered full support for a successor government.”

The coup and the subsequent murder of Diem (and his younger brother Ngo Dinh Nhu) stunned the world. Lyndon Johnson, who was then vice president, later called the coup “the worst mistake we ever made.” More than 32 years later, Robert McNamara, who was Secretary of Defense at the time, wrote, “I believe that the United States support of the overthrow of President Diem was a mistake.”

North Vietnamese President Ho Chi Minh, upon hearing the news, chortled, “I could scarcely believe that the Americans would be so stupid.”

The regime change led to a revolving door of upheavals throughout the Vietnamese government and armed forces. Three months after the Diem coup, most chiefs of the 41 provinces had been replaced at least once, major military commanders had been replaced twice and, as McNamara subsequently told President Johnson, “the political structure extending from Saigon down into the hamlets disappeared.”

The military junta that ousted Diem lasted 89 days until it was, in turn, toppled by an upstart general named Nguyen Khanh. These twinned coups were described by the leading pro-Communist leader in South Vietnam, Nguyen Huu Tho, as “gifts from heaven for us.”

Khanh lasted only 390 days before being ousted by other generals and exiled abroad on Feb. 24, 1965. Six days later, U.S. and South Vietnamese warplanes began graduated-turning-into-sustained bombing of North Vietnam. In another six days, on March 8, 1965, the first American combat unit strode ashore near the demilitarized zone with North Vietnam.

It would take another 2,943 days (or eight-plus years) for the last American soldier to withdraw from Vietnam on March 29, 1973, as the U.S. suffered the first clear military failure in its history.

The Hue incident of 50 years ago was a warning about the geopolitical hazards that can arise from religious ferment as well as a reminder about the dangerous temptation of regime change. Those warnings were inadequately addressed in the 1960s and have continued to confound policymakers in the 21st Century.

Beverly Deepe Keever was a Saigon-based correspondent who covered the Vietnam War for a number of news organizations. She has just published a memoir, Death Zones & Darling Spies.

← The Danger from Conventional Wisdom
Three Ways to Help Consortiumnews →

15 comments for “The Spark that Ignited the Vietnam War”