Exclusive: Three people died and scores were injured when two bombs exploded near the finish line of the Boston Marathon, part of the annual celebration of the Patriots who drove the British back from Lexington and Concord in 1775. For once, the U.S. news media didn’t rush to judgment about who did it, Robert Parry says.

The U.S. news media appears to have learned some painful lessons from past experiences about jumping to conclusions after terrorist incidents, and most pundits as well as journalists demonstrated more professional restraint in their coverage of the Boston Marathon bombing on Monday, the Patriots Day holiday in Massachusetts.

While there was speculation about a possible attack by Middle East terrorists, spurred by the questioning of a Saudi national, there were also timely observations about the significance of the date for American right-wing extremists. 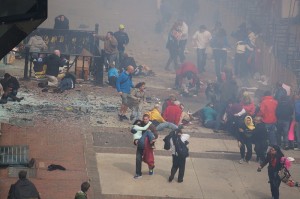 Shortly after two bombs exploded near the finish line of the Boston Marathon on April 15, 2013, people help remove the injured from the scene. (Photo credit: Aaron “tango” Tang via Wikipedia)

Not only is April 15 known as Tax Day because of the federal filing deadline, but Patriots Day in Massachusetts honors the Minutemen who battled the British on April 19, 1775, the start of the Revolutionary War. Some right-wing extremists have hijacked such patriotic symbolism to justify violent attacks on the federal government.

Timothy McVeigh’s bombing of the federal building in Oklahoma City was on April 19, 1995, which also was the second anniversary of the fiery conclusion of the Waco siege which began 50 days earlier when a heavily armed Christian sect engaged in a deadly shootout with federal agents arriving to serve a warrant to search for illegal guns.

Given the intense passions about gun control and the other significance of Patriots Day, the hesitancy to immediately blame “Muslim terrorists” represented an improvement over the recklessness that was common at such moments, especially in the 1990s when some “terrorism experts” regularly pointed their fingers in the wrong directions.

In flipping the channels on Monday evening and Tuesday morning, I did encounter some silly chatter criticizing President Barack Obama for not immediately condemning the twin bombings in Boston as “terrorism.” Obama apparently was being circumspect in his brief speech to the nation on Monday evening and did not want to enflame the situation with speculation.

The definition of terrorism is a violent act directed against civilians to achieve a political goal. While the Boston bombing was clearly a violent attack on civilians, it wasn’t immediately clear what the motivation was since no individual or group had credibly claimed responsibility for the attack.

In the absence of known motivation, one could not rule out the possibility of a single perpetrator acting out of personal rage or simply insanity, which might fall outside the rubric of terrorism. So, Obama’s caution appeared well-placed, since a presidential declaration prejudging some act as terrorism could have legal ramifications.

The pundit chatter over his choice of words, therefore, represented an example of a contrived “controversy,” sadly the sort of silliness that the news media seemed to be avoiding with its more careful handling of the tragedy in Boston.

← US Still Dominates in Arms Spending
Assessing the Iran Sanctions →

19 comments for “No Rush to Judgment in Boston”