Biblical miracles about Jesus the virgin birth, walking on water, the resurrection have caused rationalists to dismiss his very existence as just an ancient myth. But there is another possibility, that a real historical figure emerged as a doomed but popular leader and his followers then padded the story, as Rev. Howard Bess explains.

For the first 18 centuries after the death of Jesus, people did not read the Bible through the eyes of literary or historical criticism. That changed in the 19thCentury with a few German scholars, but little note was taken until Albert Schweitzer took a hard look at the Matthew, Mark, and Luke gospels. He found discrepancies, inconsistencies and gaps. 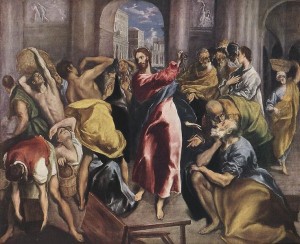 El Greco’s depiction of Jesus driving the money-changers from the Temple in Jerusalem.

In 1904, Schweitzer published the results of his studies, translated into English in 1910 under the title of The Quest of the Historical Jesus. His key conclusion was that a historical Jesus could not be found in the gospels in the New Testament. Some Christian scholars and leaders protested his conclusion; others simply ignored his work. The practical result was that the search for the Jesus of History was abandoned and did not resume for about 50 years.

So, the first quest had tried to find the Jesus of History through the study of the Bible and failed. The second quest attempted to find this historical figure through a reconstruction from his actions and words, and failed as well. At that point, in the words of one scholar, the search for the historical Jesus was a dead-end street.

That view remains widely held and was reflected in a recent conversation that I had with a gentleman who told me that there is no evidence that a person named Jesus actually lived. However, when I asked if he was familiar with modern critical studies of Jesus and the Bible, he confessed that he was not.

Finding the roots of that third quest for the historical Jesus is difficult. No single name can be cited as its leader. However, the 1980s produced a variety of studies of Palestine in the First Century, leading to scholarly articles about the Galilee of Jesus’s times. The result was that we learned a great deal about the era’s politics, economics, religion, culture and social structures.

The area was economically impoverished; the people were hostile toward the Temple rulers in Jerusalem and despised the Roman rulers. Galilee was the base for the Zealots, a movement that advocated violent overthrow of the Romans.  With this new information, a different Jesus emerged. The stories Jesus told suddenly made sense. The economic and social conflicts became understandable. His relationship with the Judaism of the First Century also became clearer.

Among most Christian scholars, there now is little doubt that Jesus grew up in rural Galilee, became a local rabbi of note and a political activist, and recruited disciples. The entry Jesus made into Jerusalem, riding a donkey when the rich and the powerful rode horses, fit within this context. He was mocking them with a form of street theater.

The incident that he instigated at the Jerusalem Temple also meshed with this new interpretation. He was protesting the corruption that came from the merging of authority between the Temple hierarchy and the Roman occupiers. His crucifixion took on a new meaning, too. After he provoked these disturbances challenging the Temple and Roman power structures Jesus was condemned as an insurrectionist and was crucified by Roman soldiers.

Of course, the traditional teaching of Christian churches is that Jesus was both fully human and fully divine. Most Christians think of him as the divine son of God, the second element in the Holy Trinity. Christian worship and confession have centered on this divine Jesus, with the celebration of Holy Communion emphasizing the spiritual presence in the bread and wine.

Yet, there is nothing about the quest for the historical Jesus that should take away from Christian belief that Jesus had a miraculous entry into earthly life, that he died for the sins of the world, and that he rose from the dead. People can choose what they want to believe about those episodes recorded in the Gospels.

However, in the light of the third quest for the historical Jesus, it becomes exceedingly difficult to be a follower of Jesus and to be indifferent to the needs of the poor and to remain uninvolved with the politics of this world.

8 comments for “Jesus as a Real-Life Insurrectionist”