Exclusive: The Senate has beaten back a filibuster from Tea Party Republicans to block debate on possible gun-reform laws in the wake of last December’s massacre of 20 first-graders and six educators in Connecticut. But the setback won’t stop the extremists from continuing to twist the Second Amendment, says Robert Parry.

Frankly, I’d have more respect for Sen. Ted Cruz and other Tea Party Republicans if they would recite the Second Amendment as it was written, not the abridged version that they prefer. After all, the amendment is only 26 words long.

Drafted by a congressional committee that seemed a bit challenged in the precise use of punctuation, it reads: “A well-regulated Militia, being necessary to the security of a free State, the right of the people to keep and bear arms, shall not be infringed.” 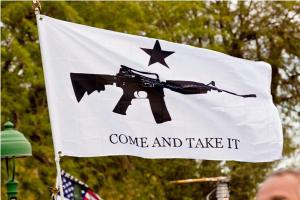 But Cruz, R-Texas, and other Tea Party favorites typically lop off the 12-word preamble that explains what the First Congress was thinking when it approved the amendment in 1789. By truncating the amendment, Cruz and the Tea Party obscure the two key motives for the amendment: “a well-regulated Militia” and state “security.”

You see the Second Amendment was not originally viewed as some “libertarian” right to kill representatives of the elected government as some on the Right now fantasize but rather the collective right of each state to maintain its own militia drawing from white male citizens who were expected to show up with their own guns. The Constitution also gave the President the power to federalize the state militias for the purpose of defending the Republic.

The Second Amendment should be understood, too, in the context of the follow-on Militia Acts enacted by the Second Congress. They mandated that white military-aged men obtain muskets and other military supplies for service in state militias. President George Washington then took command of several state militias to put down the Whiskey Rebellion in western Pennsylvania.

So, contrary to the Tea Party’s desired “history,” the initial use of the Second Amendment and the Militia Acts was to crush an anti-tax revolt in rural Pennsylvania. A similar uprising in western Massachusetts the Shays Rebellion was also fresh in the minds of Washington and other Framers, since it was one reason they went to Philadelphia in 1787 to throw out the ineffective Articles of Confederation and start over with a new Constitution.

The thinking of George Washington, James Madison and other key Framers was that an elected Republic operating under the rule of law as prescribed by the Constitution with its intricate checks and balances was the best way to protect American independence and liberties.

Of course, the Framers had a rather distorted view of what constituted independence and liberty. They accepted slavery of African-Americans, excluded Native Americans and denied suffrage to women and some white men. (Indeed, putting down slave revolts became an important role for state militias in the South.)

But the Framers clearly did not embrace the modern “libertarian” notion that disgruntled Americans should have personal arsenals so they can shoot police, soldiers or other government representatives. In fact, the Framers had a word for such activity. They called it “treason,” which was the charge brought against some leaders of the Whiskey Rebellion who were sentenced to hang (although Washington used his pardoning power to stop the executions).

If you’re not sure that the Framers really did disdain insurrection against the new Republic, you can look it up in the Constitution. Treason is defined as “levying war against” the United States as well as giving “Aid and Comfort” to the enemy (Article III, Section 3). Article IV, Section 4 further committed the federal government to protect each state from not only invasion but “domestic Violence.” There’s also language about insuring “domestic Tranquility.”

Yes, I know some on the Right have cherry-picked a few incendiary comments from Thomas Jefferson (without seeming to know that Jefferson had very little involvement in writing the Constitution and the Bill of Rights since he was serving as the U.S. representative in Paris). Many other right-wing citations claiming the Founders favored armed insurrection against the elected U.S. government have been taken out of context or were simply fabricated. [See a summary of dubious quotes compiled by Steven Krulick.]

But the key point about the Second Amendment is that it was never about an individual’s right to possess guns without restrictions. It was framed mostly out of concern that a standing federal army could become excessively powerful and that the states should maintain their own citizen militias. [See Krulick’s detailed explanation.]

So, the Second Amendment was viewed as a concession to states’ rights. Many leading political figures both Federalists who supported the Constitution and anti-Federalists who opposed it favored maintaining the citizen militias that helped win the Revolution.

Though Madison initially dismissed the need for a Bill of Rights, he recognized that he would have to make concessions to gain ratification of the Constitution, which he had labored so hard to produce. So, in exchange for some key votes on ratification, he promised to push a batch of amendments through the first Congress.

As the militia amendment progressed from Madison’s original wording, one consistent element in the various versions was the understanding that “bearing arms” was connected to “military service” in a citizens’ militia to maintain security, not to any notion of enabling armed insurrection against the legally constituted government.

For instance, a Senate rewording of the proposed amendment read: “A well regulated militia, composed of the body of the people, being the best security of a free state, the right of the people to keep and bear arms shall not be infringed; but no one religiously scrupulous of bearing arms shall be compelled to render military service in person.”

In other words, “bearing arms” and “military service in person” were treated as synonymous. Later, the conscientious-objector clause was dropped and the phrasing was further whittled down to its final form. But the preamble continued to explain what the Framers had in mind, “a well-regulated Militia” to maintain the “security of a free State.”

For generations, the U.S. Supreme Court and lesser courts interpreted the Second Amendment within this context of a collective right of the people to defend the security of their states and country, not a libertarian right for a mob of insurrectionists to possess guns for killing government officials.

Only in modern times, with the lobbying from an increasingly extreme National Rifle Association, has that anarchic view taken hold, gaining limited acceptance in 2008 when five right-wing justices on the U.S. Supreme Court overturned longstanding precedents and asserted a limited individual right to own a gun for self-protection.

However, some on the extreme Right continue to push the envelope, arguing that the Framers wanted individual fighters for “liberty” to have the capacity to inflict massive harm on fellow American citizens and to destroy the nation’s “domestic Tranquility.”

Further, these gun-rights extremists maintain that neither the states nor federal government can do anything to protect the safety of citizens and the security of the nation because the Framers, through the Second Amendment, tied the country’s hands. This right-wing interpretation of the Second Amendment rests on some very bad history or perhaps a willful misinterpretation of the Framers’ intent, which was to establish the rule of law within an orderly Republic.

This dishonesty (or ignorance) from the Right will be on display during the upcoming congressional debate. You can detect the fraud when Sen. Cruz and other Tea Partiers insist on dropping the first half of the Second Amendment. [For more on this history, see Consortiumnews.com’s “More Second Amendment Madness.”]