While the U.S. media has some spirited debate over politics and social issues i.e. Fox News vs. MSNBC there remains a broad consensus about foreign adversaries whose behavior is almost always cast in the harshest light, a reality that colors how America reacts to the world, as Jeff Cohen writes.

I spent years as a political pundit on mainstream TV at CNN, Fox News and MSNBC. I was outnumbered, outshouted, red-baited and finally terminated. Inside mainstream media, I saw that major issues were not only dodged, but sometimes not even acknowledged to exist.

Today there’s an elephant in the room: a huge, yet ignored, issue that largely explains why Social Security is now on the chopping block. And why other industrialized countries have free college education and universal healthcare, but we don’t. It’s arguably our country’s biggest problem a problem that Martin Luther King Jr. focused on before he was assassinated 45 years ago, and has only worsened since then (which was the height of the Vietnam War). 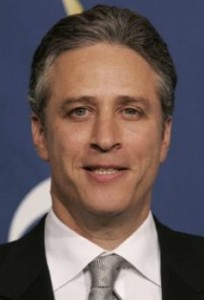 The Daily Show host Jon Stewart is one of the few voices on American television who occasionally breaks with the national security consensus.

That problem is U.S. militarism and perpetual war.

In 1967, King called the United States “the greatest purveyor of violence in the world today” and said, “A nation that continues year after year to spend more money on military defense than on programs of social uplift is approaching spiritual death.”

Nowadays MSNBC hosts yell at Fox News hosts, and vice versa, about all sorts of issues but when the Obama administration expanded the bloody war in Afghanistan, the shouting heads at both channels went almost silent. When Obama’s drone war expanded, there was little shouting. Not at MSNBC, not at Fox. Nor at CNN, CBS, ABC or so-called public broadcasting.

We can have raging debates in mainstream media about issues like gun control and gay marriage and minimum wage, but when the elites of both parties agree on military intervention as they so often do debate is nearly nonexistent. Anyone in the mainstream who goes out on a limb to loudly question this oversized creature in the middle of the room known as militarism or interventionism is likely to disappear faster than you can say “Phil Donahue.”

I know something about mainstream journalists being silenced for questioning bipartisan military adventures because I worked with Phil Donahue at MSNBC in 2002/03 when Bush was revving up the Iraq invasion with the support of Democratic leaders like Joe Biden, John Kerry, Hillary Clinton and Harry Reid. That’s when MSNBC terminated us for the crime of JWI. Not DWI, but JWI Journalism during Wartime while Independent.

JWI may be a crime in mainstream media, but it’s exactly the kind of unauthorized, unofficial coverage you get from quality independent media today and from un-embedded journalists like Jeremy Scahill, Dahr Jamail and Glenn Greenwald.

Unfortunately, many liberal journalists who were vocal about war, human rights and civil liberties during the Bush era lost their  voices as Obama continued and, in some cases, expanded Bush’s “War on Terror” policies. It says something about the lack of serious national debate on so-called national security that last month one of the loudest mainstream TV news questioners of the president’s right to assassinate Americans was Sean Hannity on Fox. That’s obscene.

And it says something about mainstream TV that the toughest, most consistent questioners of militarism and defenders of civil liberties are not on a news channel they’re on the comedy channel. A few weeks ago, I watched a passionate Jon Stewart taking on the U.S. military budget: “We already spend more on defense than the next 12 countries combined, including China, including Russia. We’re like the lady on Jerry Springer who can’t stop getting breast implants.” (On screen was a photo of the Springer guest.)

In a democracy, war must be subjected to questioning and debate. And not just on the comedy channel.

Jeff Cohen is  founding director of the Park Center for Independent Media at Ithaca College and an associate professor of journalism there. His latest book is Cable News Confidential: My Misadventures in Corporate Media. He founded the media watch group FAIR in 1986. This column is adapted from remarks made April 6 at the National Conference on Media Reform in Denver.

← What’s the End Game for Iran Talks?
Tyranny of Deception →

6 comments for “The Consensus Behind Militarism”