For decades, the U.S. government has worked to bend respected human rights groups to the goals of Official Washington, often by spreading around money and credentialing the easily co-opted. The strategy has touched groups like Amnesty International and now PEN, write John V. Walsh and Coleen Rowley.

Suzanne Nossel is a disturbing choice as the new executive director of PEN, American Center, an American branch of the worldwide association of writers and related professions devoted to free expression and “the ideal of one humanity living in peace in the world.” International PEN was founded in 1921 to act as a powerful voice for freedom of expression and in defense of writers facing harassment and jail.

Playwright Arthur Miller, who once led PEN, said, “When political people have finished with repression and violencePEN can indeed be forgotten. Until then, with all its flounderings and failings and mistaken acts, it is still, I think, a fellowship moved by the hope that one day the work it tries and often manages to do will no longer be necessary.” 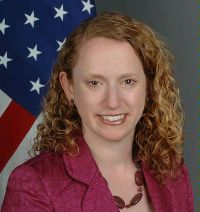 Nossel is an advocate for what she has termed “Smart Power,” as she explained in Foreign Affairs: “To advance from a nuanced dissent to a compelling vision, progressive policymakers should turn to the great mainstay of twentieth-century U.S. foreign policy: liberal internationalism (which) should offer assertive leadership, diplomatic, economic, and not least, military, to advance a broad array of goals.” (Emphases added)

The stark contrast between the statements of Arthur Miller and Suzanne Nossel is enough to sound an alarm. But Nossel’s career path, the masters she has served, the stances she has taken and the activities she has sponsored demonstrate profound differences with PEN, which cannot remain true to the ideals articulated by Arthur Miller with Nossel at the helm. She is an embodiment of the ongoing, and all too successful, cooption of the Human Rights movement by the U.S. government.

Nossel came to PEN after a year’s stint as Executive Director of Amnesty International, USA (AI), in 2012. Before that she served in Hillary Clinton’s State Department as Deputy Assistant Secretary of State for International Organization Affairs. Let’s consider her time at AI first:

Nossel assumed her post as Executive Director of AI in January, 2012. Then in May when NATO held its “Summit Meeting” in Chicago, AI sponsored a “Shadow Summit” there. As part of this effort, AI mounted a campaign which employed bus stop billboards supporting the NATO invasion in the words, “NATO, Keep the Progress Going. Human Rights for Women and Girls in Afghanistan.”1 “Bombing the women to save them” might well have been the slogan.

AI’s “Shadow Summit” featured a number of panels at a Chicago hotel with the main speaker at the first panel former Secretary of State Madeleine Albright, who famously observed to Leslie Stahl that the deaths of many hundreds of thousands of Iraqis, including an estimated 500,000 children, on her watch during the Clinton administration was a price “worth it” to weaken former U.S. ally, Saddam Hussein.

What was such a person doing at an AI event? The same panel featured other female luminaries from the U.S. foreign policy establishment, including Melanne Verveer, U.S. Ambassador-at-Large for Global Women’s Issues who was also a main speaker; U.S. Rep. Jan Schakowsky, D-Illinois; and Afifa Azim, General Director and Co-Founder, Afghan Women’s Network; along with Moderator Gayle Tzemach Lemmon, Deputy Director of AI.

Coleen Rowley and Anne Wright, who resigned from the State Department in 2003 to protest the war on Iraq, along with a handful of fellow antiwar activists attempted to attend the panel but were refused entrance until some in the group pointed out that they were members of AI.

AI then allowed the group to enter, but in an apparent lapse of concern for free speech only if signs opposing NATO’s war on Afghanistan were left outside. Such is the forgetfulness that proximity to power breeds. In a written account of the panel entitled “Amnesty’s Shilling for U.S. Wars,” Rowley and Wright noted that the CIA’s “Red Cell” in a report disclosed by Wikileaks, had recommended a strategy of using “women’s rights” to sell the war in Afghanistan.

Rowley and Wright continued: “When we saw that audience participation was going to be limited to questions selected from the small note cards being collected, we departed. We noted, even in that short time, however, how easy it was for these U.S. government officials to use the ‘good and necessary cause’ of women’s rights to get the audience into the palm of their collective hand, just as the CIA’s ‘strategic communication’ expert predicted!”

One has to ask what is afoot when a former State Department official takes over an organization like AI, which then neatly fits its approach into that of the U.S. government.

A few months after the appearance of the Rowley/Wright piece and complaints by other members and donors of AI, Nossel resigned unceremoniously. A call to AI’s national office unearthed the reply from a staff member that the “staff had been told” that Nossel had resigned “for personal reasons.” The promise of a return call by someone more knowledgeable did not materialize. Who was responsible, on or off the board, for hiring Nossel in the first place remains a mystery.

Nossel is often credited with coining the phrase “Smart Power,”2 which Secretary of State Hillary Clinton repeated interminably in her Senate confirmation hearings to characterize how she would run State. Nossel defined the term in a 2004 article in Foreign Affairs as “assertive leadership, diplomatic, economic, and not least, military.”

What was this smartly powered State Department like into which Nossel was hired? Perhaps Ralph Nader has taken the measure of it most perceptively, in a CounterPunch essay entitled “Hillary’s Bloody Legacy: Militarizing the State Department”:

“Secretary Clinton reveled in tough, belligerent talk and action on her many trips to more than a hundred countries. She would warn or threaten ‘consequences’ on a regular basis. She supported soldiers in Afghanistan, the use of secret Special Forces in other places and ‘force projection’ in East Asia to contain China. She aggressively supported or attacked resistance movements in dictatorships, depending on whether a regime played to Washington’s tune.

“Because Defense Secretary Robert Gates was openly cool to the drum beats for war on Libya, Clinton took over and choreographed the NATO ouster of the dictator, Muammar al-Gaddafi, long after he had given up his mass destruction weaponry and was working to re-kindle relations with the U.S. government and global energy corporations. Libya is now in a disastrous warlord state-of-chaos. Many fleeing fighters have moved into Mali, making that vast country into another battlefield drawing U.S. involvement. Blowback!”

Thus did Nossel’s strategy of “Smart Power” play out as she worked at the side of Clinton.

Before working at State, Nossel worked at Human Rights Watch, which has come under increasing criticism for its distorted accounts of the Chavez government in Venezuela and other official enemies of the U.S. And before that she worked at the UN under Richard Holbrooke as the Clintons masterminded the bombing of Yugoslavia and pushed NATO eastward in violation of assurances given by Ronald Reagan to Mikhail Gorbachev.

Here we behold a revolving door between government and human rights NGOs, much like the one connecting the Pentagon and defense contractors or between regulatory agencies and the corporate entities they are to regulate.

Nossel is clearly aware of the use that the U.S. government can make of organizations like PEN, writing in her 2004 “Smart Power” essay that “the United States’ own hand is not always its best tool: U.S. interests are furthered by enlisting others on behalf of U.S. goals.”

For many decades the rhetoric of human rights has been used by the West to justify its aggressive actions around the world. James Peck in his superb and much neglected work, Ideal Illusions: How the U.S. Government Co-Opted Human Rights, painstakingly and meticulously documents such subversion over the past 50 years.

But the subversion goes farther than the selective attention often paid to official enemies and the relative neglect of human rights violations by U.S. allies. He also points out that the concept of human rights that has prevailed in the West over this period is a shriveled one, basically confined to civil rights.

Although the mainstream human rights movement in the West claims to take its inspiration from the UN Declaration of Human Rights, it rarely mentions Articles 25 and 26, among others, which affirm health care and education as rights. Thus the fact that Gaddafi’s Libya had the highest literacy rate or highest score in all of Africa on the UN’s Human Development Index counted for nothing in assessments of Gaddafi. Nor is faintest praise to be found for the many hundreds of millions lifted from poverty and made literate in New China.

Similarly, Jean Bricmont in his insightful, Humanitarian Imperialism, another book studiously avoided by “progressives” in the West, details the use of human rights rhetoric to gain the support of European intellectuals for the Clintons’ assault on the Balkans. This in fact marked a turning point in the view of intellectuals toward the wars of present day imperial powers on weaker nations, a view that set the stage for assaults on Iraq, Afghanistan, Pakistan, Libya and now Syria.

It marked a sharp break with the opposition of intellectuals to the U.S. war on Vietnam. The important principle of sovereignty enshrined in international law to protect weak nations from falling prey to powerful ones was rudely tossed aside, with much talk of human rights as the justification.

The question is which way will PEN go the way of Benda or continue along the way of Nossel. Today a search on the PEN, America, web site readily yields entries for Pussy Riot, Ai Weiwei, and Liu Xiaobo, but nothing is to be found for “Bradley Manning” or “Julian Assange”! That in itself speaks volumes about Nossel’s PEN.

As Chomsky and others have often pointed out, the primary duty of intellectuals is to critique their own ruling elite. After all, we can most affect our own rulers and it is their actions we are most responsible for. And that is what requires genuine courage. Criticizing elites in countries that are America’s official enemies is an easy and secure career path.

For those who are appalled by what is happening at PEN, here are links to a list of current and newly elected officers and trustees. They bear ultimate responsibility for the path that PEN is taking and for Suzanne Nossel’s employ. The issue can also be raised at the upcoming PEN World Voices events in New York City.

Former New York Times correspondent (and Truthdig columnist) Chris Hedges, who was scheduled to speak at the PEN events, resigned his membership in the writers’ organization in protest of Nossel’s appointment. It is clear that many speakers at these events, perhaps the overwhelming majority, hold views quite the opposite of Nossel’s, as well they should. Nossel should resign.

Speaking out in cases like this is the only way to prevent the Empire from corrupting all it touches, including the human rights movement.

John V. Walsh, lately become an associate member of PEN, is a biophysicist/neuroscientist living in the Boston and area and a contributor to DissidentVoice.org, CounterPunch.org, and Antiwar.com. Coleen Rowley, now an antiwar activist in the Twin Cities area, is a former FBI special agent and legal counsel in the Minneapolis field office, who wrote a “whistleblower” memo in May 2002 and testified to the Senate Judiciary Committee about some of the FBI’s pre-9â€Š/â€Š11 failures. [A version of this article earlier appeared at http://dissidentvoice.org/2013/04/u-s-cooption-of-the-human-rights-movement-continues/#more-48267]