Christianity has two conflicting views of Jesus’s Crucifixion, that God sacrificed his Son to atone for mankind’s sins, or that Jesus demanded economic and political justice for the poor and was killed by Jerusalem’s power structure. The two interpretations lead in very different directions, as Rev. Howard Bess explains.

Christian Holy Week begins with Jesus’s entry into Jerusalem (Palm Sunday) and concludes with his celebrated resurrection (Easter). But what happened during that fateful week and the meaning of the Crucifixion remain a central focus of Christian debate.

Was Jesus killed by the Romans as an insurrectionist because he favored political and economic justice for the poor and acted out his outrage by overturning money-changing tables at the Temple? Or did he die as a sacrifice to atone for the sins of mankind in the eyes of God? 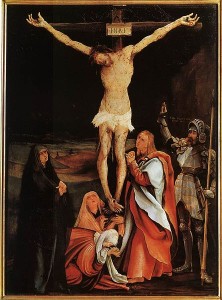 Rob Bell’s recent book, Love Wins, has brought the subject into sharp focus as a challenge to the traditional Christian theology that Jesus died as a sacrifice for sin and that his sacrificial death was somehow required by a just God so the sins of the world could be forgiven.

For many Christians this understanding of this sacrificial death of Jesus presents a stern, demanding God (arranging the brutal torture and murder of his only begotten son) rather than a loving heavenly father who embraces all of humankind out of boundless love.

Yet, among early Christians, there was no commonly accepted meaning and understanding of the death of Jesus. According to the gospel accounts, the Crucifixion took place because he was charged with insurrection, and his call for the establishment of the Kingdom of God on earth was interpreted as seeking the overthrow of the Roman rulers. This history has strong supporting research.

Based on that research, scholars believe that Jesus grew up and taught in a rural area 70 miles north of Jerusalem. His faith was shaped, not by Jerusalem and the Temple, but by weekly gatherings of the community elders as they read Torah (Jewish law) and discussed its meaning.

Jesus and his followers had only limited contact with Jerusalem’s social, political and religious leaders, mostly through the retainers (enforcers) of Herod’s Roman rule who also represented the Jerusalem Temple. Retainers made regular trips into the rural north to collect tithes and taxes.

To understand Jesus, one must realize the depth of his contempt for both the rule of Herod and the religious rulers of the Temple.

Northern Palestine was a hotbed for what was known as the small tradition, which found heroes in Isaiah, Jeremiah, Amos, Micah and other Old Testament prophets, almost all of whom were critics of the great tradition leaders who controlled the Temple in Jerusalem.

But Jesus was a largely unknown and harmless critic as long as he remained in his northern rural setting. He was clearly an apocalyptic preacher. He advocated overthrow of a corrupt system. He believed the days of the oppressors were numbered. But he believed the overthrow could be accomplished by love, mercy and kindness.

Jesus took his message to Jerusalem. However, to call his arrival a triumphal entry is to miss the point completely. He chose to enter Jerusalem riding on a donkey as mockery of the ruler’s horse. It was an ancient form of street theatre that Jesus and his followers used to make their point. The great tradition that was accepted by Jerusalem’s masses was being publicly taunted by a figure of the small tradition.

But the critical point of Jesus’s visit to Jerusalem came when he visited the Temple. In no sense had he come to worship and make sacrifice. He went to disrupt and to make pronouncements about the judgment of God on the whole operation. He went to the Temple to announce the destruction of a whole way of life.

As a result, the charges that were leveled against Jesus can be summed up as insurrection. There were three specific charges: encouraging non-payment of taxes, threatening to destroy property (the Temple), and claiming to be a king. It was the Temple incident that took Jesus from being an irritating, but harmless country rebel from the rural north to a nuisance in a city that controlled the great tradition. As a result, Rome’s retainers killed him on a cross.

Yet, how Christians later interpreted these events was influenced by the Old Testament in which priests laid out a sacrificial system in which animals were ceremonially sacrificed to appease God for the sins of the people. Solomon had built a great Temple to carry out these sacrifices. Some Old Testament prophets protested this system, as did Jesus.

The Gospel of John reflected the commonly held interpretation of Jesus’s Crucifixion in the early Second Century C.E.  Stated simply, according to the John writer, Jesus died a martyr’s death on behalf of his friends in protest against a corrupt political and religious system. Jesus willingly died because he loved his friends.

There is another notable insight found in John 15.  Jesus is quoted as saying “No longer will I call you servants but rather I call you friends.” In a bold move, the John writer wipes out the master/servant relationship between Jesus and his disciples and makes it into a friendship so close that Jesus would gladly die for them.

In the passage, Jesus is prompted to call his disciples “friends” four times.  No other place in the four gospels are the disciples called “friends” of Jesus.

However, centuries after Jesus’s death, the Latin interpretation of the Crucifixion took over the Church’s understanding of what happened on that first “Good Friday.” In Latinized Christianity, which followed the Old Testament sacrificial system, the cross became an altar on which Jesus became a sacrificial lamb.

According to the Latinized version, Jesus died for the sins of the world to appease an upset God. Now, many thoughtful Christians, led by Rob Bell, are protesting as unacceptable that understanding of the cross.

Yet, the passage found in John’s gospel gives us a new insight into the meaning of Holy Week and its celebrations. Holy Week does not find its most profound meaning in a sacrificial system that is demanded by an upset God.

Holy Week is a time to celebrate a friendship with Jesus, who is viewed by Christians as the special son of a loving God, a friendship so profound that Jesus was willing to die for the just causes of his friends.

The Rev. Howard Bess is a retired American Baptist minister, who lives in Palmer, Alaska.  His email address is hdbss@mtaonline.net.  [This article is augmented by some passages from an earlier article by Rev. Bess, “Misunderstanding Jesus’s Execution.”]

12 comments for “The Two Views of Jesus’s Murder”