Exclusive: The U.S. “news” networks bubbled with excitement over the selection of Argentine Cardinal Jorge Bergoglio to be Pope Francis I. But there was silence on the obvious question that should be asked about any senior cleric from Argentina: What was Bergoglio doing during the “dirty war,” writes Robert Parry.

If one wonders if the U.S. press corps has learned anything in the decade since the Iraq War i.e. the need to ask tough question and show honest skepticism it would appear from the early coverage of the election of Pope Francis I that U.S. journalists haven’t changed at all, even at “liberal” outlets like MSNBC.

The first question that a real reporter should ask about an Argentine cleric who lived through the years of grotesque repression, known as the “dirty war,” is what did this person do, did he stand up to the murderers and torturers or did he go with the flow. If the likes of Chris Matthews and other commentators on MSNBC had done a simple Google search, they would have found out enough about Cardinal Jorge Bergoglio to slow their bubbling enthusiasm. 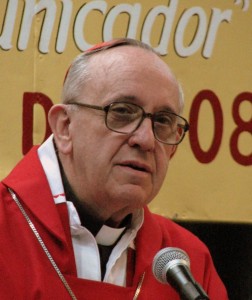 Bergoglio, now the new Pope Francis I, has been identified publicly as an ally of Argentine’s repressive leaders during the “dirty war” when some 30,000 people were “disappeared” or killed, many stripped naked, chained together, flown out over the River Plate or the Atlantic Ocean and pushed sausage-like out of planes to drown.

The “disappeared” included women who were pregnant at the time of their arrest. In some bizarre nod to Catholic theology, they were kept alive only long enough to give birth before they were murdered and their babies were farmed out to military families, including to people directly involved in the murder of the babies’ mothers.

Instead of happy talk about how Bergoglio seems so humble and how he seems so sympathetic to the poor, there might have been a question or two about what he did to stop the brutal repression of poor people and activists who represented the interests of the poor, including “liberation theology” priests and nuns, during the “dirty war.”

Here, for instance, is an easily retrievable story from Guardian columnist Hugh O’Shauhnessy from 2011, which states:

“To the judicious and fair-minded outsider it has been clear for years that the upper reaches of the Argentine church contained many ‘lost sheep in the wilderness’, men who had communed and supported the unspeakably brutal Western-supported military dictatorship which seized power in that country in 1976 and battened on it for years.

“Not only did the generals slaughter thousands unjustly, often dropping them out of aeroplanes over the River Plate and selling off their orphan children to the highest bidder, they also murdered at least two bishops and many priests. Yet even the execution of other men of the cloth did nothing to shake the support of senior clerics, including representatives of the Holy See, for the criminality of their leader General Jorge Rafael Videla and his minions.

“As it happens, in the week before Christmas [2010] in the city of CÃ³rdoba Videla and some of his military and police cohorts were convicted by their country’s courts of the murder of 31 people between April and October 1976, a small fraction of the killings they were responsible for. The convictions brought life sentences for some of the military.

“These were not to be served, as has often been the case in Argentina and neighbouring Chile, in comfy armed forces retirement homes but in common prisons. Unsurprisingly there was dancing in the city’s streets when the judge announced the sentences.

“What one did not hear from any senior member of the Argentine hierarchy was any expression of regret for the church’s collaboration … in these crimes. The extent of the church’s complicity in the dark deeds was excellently set out by Horacio Verbitsky, one of Argentina’s most notable journalists, in his book El Silencio (Silence),” which alleges Bergoglio’s complicity in human right abuses.

The Guardian article stated: “The most shaming thing for the church is that in such circumstances Bergoglio’s name was allowed to go forward in the ballot to chose the successor of John Paul II. What scandal would not have ensued if the first pope ever to be elected from the continent of America had been revealed as an accessory to murder and false imprisonment.

“One would have thought that the Argentine bishops would have seized the opportunity to call for pardon for themselves and put on sackcloth and ashes as the sentences were announced in CÃ³rdoba but that has not so far happened. … Cardinal Bergoglio has plenty of time to be measured for a suit of sackcloth perhaps tailored in a suitable clerical grey.”

Now, instead of just putting forward Bergoglio’s name as a candidate for Pope, the College of Cardinals has actually elected him. Perhaps the happy-talking correspondents from the U.S. news media will see no choice but to join in the cover-up of what Pope Francis did during the “dirty war.” Otherwise, they might offend some people in power and put their careers in jeopardy.

In contrast to the super-upbeat tone of American TV coverage, the New York Times did publish a front-page analysis on the Pope’s conservatism, citing his “vigorous” opposition to abortion, gay marriage and the ordination of women. The Times article by Emily Schmall and Larry Rohter then added:

“He was less energetic, however, when it came to standing up to Argentina’s military dictatorship during the 1970s as the country was consumed by a conflict between right and left that became known as the Dirty War. He has been accused of knowing about abuses and failing to do enough to stop them while as many as 30,000 people were disappeared, tortured or killed by the dictatorship.”