In recent decades, Watergate reporter Bob Woodward has blundered in fawning books on Federal Reserve Chairman Alan Greenspan and President George W. Bush and now finds a threat in a routine exchange with a White House official. But overlooked is his war-mongering, says William Boardman.

When a veteran Navy intelligence analyst gets his knickers in a loud public twist over the number of U.S. nuclear-strike capable aircraft carriers in the Persian Gulf, one might first enjoy the spectacle but then wonder: why such carryings-on to raise the military threat against Iran?

When the veteran Navy intelligence analyst turns out to be Bob Woodward, who has a national audience from his platform at the Washington Post, serious observers might well wonder what the motive for this misleading war-mongering might be (beyond fitting with the apparent editorial policy at the Post). 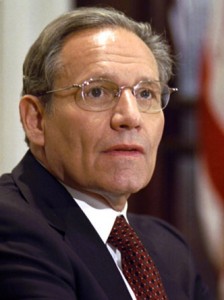 But overt war-mongering quickly became a non-issue for most of what passes for the American journalistic intelligentsia, as twitter-heads of all persuasions were promptly distracted by the shiny objects of alleged and imaginary “threats” from the White House (gasp!). Finding the “threat” hidden in an apology failed to stop much of the mainstream media from seeing a danger to a free press.

The actual news behind this empty-headed media kabuki about fake “intimidation” of the press was actually reported (and largely ignored) on Feb. 6, when NBC  ran with this false headline: “Navy to pull aircraft carrier from Persian Gulf over budget worries.”

The text quickly revealed that the Navy wasn’t pulling an aircraft carrier from the Persian Gulf; it was simply NOT sending a second aircraft carrier to the Persian Gulf, under a two-carrier policy ordered by Defense Secretary Robert Gates in 2010. The change in policy raises interesting questions about the U.S. role in the region, but the NBC story ignores that aspect while going on at length about what appears to be a Navy cover story: budget cuts make the deployment too expensive.

Not content with Pentagon assurances that the U.S, would “maintain a robust presence” in the Persian Gulf region, the Post’s Woodward had a delayed but volcanic reaction to the U.S. reducing its ability to obliterate the region to a mere three or four times over. He called the decision not to deploy the second carrier “madness.”

On the MSNBC show ”Morning Joe,”  on Feb. 27, Woodward accused President Obama of exhibiting “a kind of madness I haven’t seen in a long time” for having only one aircraft carrier in the Persian Gulf. Since the two-carrier policy dates from 2010, Woodward implies he hasn’t seen that kind of madness for almost three years, although he doesn’t say that.

In the context of discussing the sequester, what he says very calmly is: “President Obama came out and acknowledged that we are not sending the aircraft carrier Truman to the Persian Gulf because of this budget agreement.

“Under the Constitution, the President is commander-in-chief and employs the force. And so we now have the President going out because of this piece of paper and this agreement. ‘I can’t do what I need to do to protect the country.’  That’s a kind of madness that I haven’t seen in a long time.”

Now THAT’s a kind of madness. Unfortunately it’s a familiar kind of madness seen all too often in the U.S. government and the U.S. news media. “Protect the country” from what? Fulminating about Iraq? Saddam Hussein? Secret war in Nicaragua, perhaps? Is there a pattern here?

No wonder Joe Scarborough immediately changed the subject. But if Woodward’s outburst isn’t war-mongering against Iran, what is it? Early senility is a possibility, I suppose, or early morning wobbliness. Not likely, not from Woodward, not from a master of hidden agendas hiding other agendas.

If it matters, why wasn’t Woodward on the case when the Navy announced the non-deployment decision three weeks earlier? Why did he wait till President Obama referred to it in a speech in Norfolk, Virginia, on Feb. 26, when he said, “The threat of these cuts has forced the Navy to cancel the deployment [of the aircraft carrier].”

Is anybody telling the truth here? Doesn’t look like it. Is anyone taking the aircraft carrier decision back to its essentials? Apparently not.

The first question is: why does the United States need any aircraft carriers in the Persian Gulf? To spare more distraction, let’s concede that a credible argument can be made for the projection of American power everywhere we want to stick it.

The next question, then, is: why does the United States need TWO aircraft carriers in the Persian Gulf, where the last time any Persian Gulf country was attacked was when the U.S. attacked Iraq. There was serious violence in Bahrain more recently, but that was the government attacking its own people and Bahrain is a U.S. ally, home to a U.S. Navy base, so Washington was unconcerned.

So what is this two-aircraft-carriers-in-the-Persian-Gulf business all about? The last time the U.S. deployed a second aircraft carrier to the Persian Gulf was in April 2012, when CBS News very helpfully reported:

“(CBS/AP) DUBAI, United Arab Emirates – The U.S. Navy said Monday it has deployed a second aircraft carrier to the Persian Gulf region amid rising tensions with Iran over its nuclear program. The deployment of the nuclear-powered USS Enterprise along [with] the Abraham Lincoln carrier strike group marks only the fourth time in the past decade that the Navy has had two aircraft carriers operating at the same time in the Persian Gulf and the Arabian Sea, said Cmdr. Amy Derrick-Frost of the Bahrain-based 5th Fleet.

“The two carriers will support the American military operations in Afghanistan and anti-piracy efforts off Somalia’s coast and in the Gulf of Aden, said Derrick-Frost. The warships also patrol the Gulf’s strategic oil routes that Iran has threatened to shut down in retaliation for economic sanctions.”

No wonder Woodward is losing it.

William Boardman lives in Vermont, where he has produced political satire for public radio and served as a lay judge. [A version of this article was originally published at Reader Supported News.]