There was a time in America when someone like Ramsey Clark could be Attorney General and assert the power of the federal government on the side of civil rights, but that now seems like ancient history, as Clark reflects on the past and present with Dennis J. Bernstein.

For more than 50 years in both the public and private sectors former U.S. Attorney General Ramsey Clark has challenged the abuse of power and taken up the cause of the oppressed.

During his tenure at the Justice Department, including serving as Attorney General during the Johnson administration, Clark worked to end racial segregation and played a historic role in support of the American Civil Rights Movement. 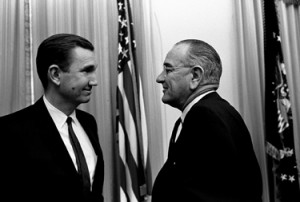 Clark was in charge of enforcing the court order that protected the famous march from Selma to Montgomery; leading the investigation of abuses by police and the National Guard following the Watts riots; and supervising the drafting and passage of the Voting Rights Act of 1965 and Civil Rights Act of 1968. He also opposed electronic surveillance and refused to authorize an FBI wiretap on Martin Luther King, Jr.

An outspoken critic of U.S. foreign policy, Clark has called for an end to the wars in Afghanistan and Iraq as well as a ban on depleted uranium weapons. He fervently opposes the escalating militarization of the United States and is a staunch advocate for victims of constitutional violations and legal travesties in post-9/11 America.

DB: We have spoken with you before over the years in various parts of the globe and today you are here to talk about limits of power, this power which you have spent a lifetime challenging. First you were an enforcer as an Attorney General. Maybe you didn’t change much, but you became the people’s defense. In terms of government power and citizens rights, compared to 20 years ago, where are we? Do we have more rights? Are we safer or not safer in terms of the guarantees that we are supposedly given under the constitutional amendments?

RC: I’ll ignore your 20-year limitation. I think there’s been a significant erosion in government respect for fundamental human rights for our own citizens and the security of people abroad. Since the idealism of the 60’s, I don’t think we’ve maintained the respect for individual rights or human dignity that we were inspired with. The Vietnam War took a lot of that out of us, but I think the concentration of capital has done more to hurt individual liberties than anything else.

DB: Really? The merging of the corporate state and corporate power. Could you say a little more about that?

RC: It’s not concerned with individual rights. Look at the prison population. It’s heartbreaking and staggering. There’s not a better barometer of how you feel about freedom than how many people you put in prison. You need to find a better way to treat your folks.

As you look at the discrimination by numbers and percentage of the young black males in prison and the lives that are severely damaged, it is just unbelievable and staggering. It’s a shame for the nation that we would ever permit that. That’s after the civil rights movement. So you get to vote until you go to prison and then you can’t vote anymore because you have been convicted of a felony.

DB: A lot of discussion now about the drone program. We have admissions from the highest levels of government that the President of the United States has collaborated in a wide-ranging program of assassinations. In the context of national and international law, how would you characterize that?

RC: Murder. Simple. It ought to be addressed as such. The drones themselves are murder. The U.S. is going into neutral countries, areas far, far removed from war zones, often missing the people who were intended to be hit and hitting a lot of people there was no intention of hitting but they just got in the way. And it doesn’t seem to bother the government. But just the technique. What happens on earth there’s no safety anyplace from something in the sky that you can’t see until it kills you.

DB: We have done a lot of programming over the last two invasions of the Gaza Strip. Even though the first one was more bloody and brutal, the last one was a drone war. When you were speaking with people, there were drones everywhere. People were terrified. Just about every human being on the Gaza strip was vulnerable. Where are we in terms of warfare and the power of the rich and the elite to control the rest by any means necessary, which seems to be more and more intense weaponry?

RC: The plight of Gaza, not to mention Palestine generally, is desperate. I represented the PLO for about 30 years until Arafat left. He only left Gaza about two years before he died so I’d visit him there regularly. The place was booming. They were producing three crops a year, there was green everywhere. They were almost finished building an international airport. Education was booming. I don’t know of a place that was so intense on education from grammar school through graduate school. And it was so spirited.

I was there in January. Now it is just awful. It seems like you are at risk at all times. There is no security anyplace. Even agriculture is barren. Hospitals are in terrible shape, lacking medicines for the many injured and sick people. It’s a desperate situation and getting worse.

DB: Is it an overstatement to call it an ethnic cleansing in process? Clearly there’s a methodical attempt to purge Palestinians from their land. If you live in the West Bank you can’t even get to the Gaza Strip to see your uncle on a holiday or the weekend.

RC: I went a few times. It’s a day’s trip, even though just a few miles. You can get there. But if you are trying to meet somebody, it takes a lot of time. I went to Gaza to meet some people and didn’t have time to go to the West Bank. So they came to see me, but they got there 15 minutes before I had to leave after waiting there for 24 hours. That’s how hard it is.

DB: It was just the 40th anniversary of the American Indian Movement. We spoke with Bill Means, who was on the Wounded Knee reservation for the gathering. They were remembering and thinking about what still needs to happen. You’ve represented Leonard Peltier, who is still in jail. Your thoughts on why the U.S. government will not let him out and the significance of his role in this new movement. You’ve worked closely with him.

RC: I argued his first parole release, which is decades ago now. The poor medical examiner ordered release and lost his job because of it. One day in 1965 when I was Deputy Attorney General I was walking across a prison yard in Texas and I saw an old guy slumped over a building. I walked over and asked what he was doing here but there was no response. I patted him on the back and he seemed senile.

I turned to the warden and said “Why is he here? The sun could kill him.” The warden said, “We have been trying to get rid of him for years. Whenever we said we wanted to release him, we’d get a letter back from J. Edgar Hoover who said that anyone who is convicted of killing an FBI agent will never leave prison.” I think that’s Leonard Peltier’s problem, although of course he was wrongfully convicted, but two FBI agents were killed.

DB: Two FBI agents killed, so they will never let him go.

RC: As long as the present power prevails. I’m more of an optimist than that. He shouldn’t have been in prison in the first place and it’s so desperately over-done.

DB: Can you tell us, what are some of the issues that we need to do something about.

RC: You are asking for a long list. I’d have to start with our wars. We’ve got to stop these wars. We just had one outrageous, murderous war after another and we are aiming for Iran now, which might be called the last man standing but it’s not the last, because there will be another war after that. Look at the toll of those wars, and the sheer idiocy of going into Iraq. Since 1991 those people have not had a moment of peace, they are always at risk of death. And it’s as bad now or worse than it’s ever been.

After Bush’s invasion in 2003 I don’t see how the people withstood it. But they say mankind is a creature that can be accustomed to anything and they have become accustomed to hell on earth. It’s our responsibility, so we have to stop it. We have to prevent it from happening further and we can’t do that until we de-militarize.

DB: Is that possible? Where do we go? What is the advice now?

RC: It isn’t only possible, we’d be so much better off. Think of all the things we could do with the money if that was the only benefit we got from it. But we are risking fighting a nuclear war because, after signing it in 1968, we continue to violate the Nuclear Arms Proliferation Treaty, which compels the five or six nuclear powers at the time to work to eliminate their own nuclear weapons in return for the other nations not acquiring nuclear weapons.

But instead, it’s grown, and today if you have an enemy with a nuclear weapon, you’d better get one yourself, because there is no other protection. You can’t fight because they’ll take out all your cities. It doesn’t matter how much bigger you are than they. That’s the plight Iran’s faced with. How do you protect your people if Israel’s got the bomb?

DB: We’re way past 1984, but every time I hear the notion that Israel, the renegade, is restraining itself by not using some of their 500 thermo-nuclear weapons against Iran, it sounds so Orwellian. That is the story that is carried by mainstream [media], including liberal media like NPR. How do we confront this?

RC: We must stand up and do our best. Speak out for what it is. I started going to Iran when the Shah was still there. I watched what they did in the Iran/Iraq war. They lost 800,000 kids because the kids would hold a rifle wearing only tennis shoes and pants and charge toward the artillery and aircraft of the Soviet Union and U.S. and all the other powers of the earth backing Iraq in that war. They lost 800,000 young men but they kept fighting and they won. They finally prevailed in spite of everything. The problem they have is that however courageous they are, if an enemy uses nuclear weapons against them, their cities are gone.

DB: Ramsey Clark, former U.S. Attorney General, human rights and civil rights attorney for the people, we have spoken to you around the world, and wherever you are the people appreciated your presence. You give us hope and an example of how to live. Thank you, and what an honor.