Despite originating in Jesus’s messages of peace, Christianity has been arguably the world’s most violent religion with its adherents committing genocide on all continents except unpopulated Antarctica. Again and again, Christian churches have blessed warfare, but a new generation is objecting, says Rev. Howard Bess.

The present upheaval in Christian churches cannot be divorced from the coming-of-age of a younger American population that is weary of war on the world scene, fed up with violence in our American communities, and outraged at the violence that is taking place in our homes. For many, violence has become unacceptable.

A key question that is taking center stage in this new developing Christianity is: “Is God violent?” That topic is addressed in Rob Bell’s book, Love Wins,which put him on the cover of Time magazine and won him a major piece in The New Yorker. 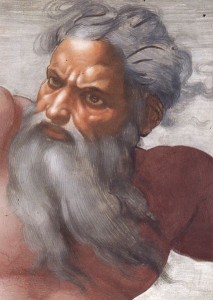 The face of God as depicted by Michelangelo in his painting at the Sistine Chapel.

But, some Christians ask, what about the God found in the Bible? That God is sometimes loving and sometimes violent. Thus, for many Christians, choosing a God who favors no violence is a denial of the Holy Bible.

Which leads Christians to another question: Is the Bible indeed a Holy book without error or is it a collection of writings that reveals ongoing discussions and arguments about the nature and activities of the God of Abraham, Jacob, Moses, David, Isaiah, Jeremiah and Jesus?

The growing American objection to violence is forcing a new look among Christians at the authority of the Bible as a Holy book. In particular, the new breed of emerging Christians is choosing to look to Jesus for authority rather than the rest of the Bible. According to the historical record that survives, Jesus was a non-violent, loving people’s rabbi.  He never inflicted violence on others, nor did he endorse violence in his teachings.

When this new breed of emerging Christians looks at Jesus, they read simple statements like “Love your enemies” and “Blessed are the peacemakers.”  They hear him telling his disciple to “Put up your sword” with the added admonition, “Those who live by the sword will also die by the sword.” These short sayings are memorable and give good guidance to living life in a different, non-violent, peaceful manner.

But can America become a non-violent, peaceful country? Or have the many wars of our past poisoned our minds and hearts beyond recall? Have we fallen into the lie that peace and security can only be attained with bigger armies and more powerful weapons? Or, do we hear the warning of Jesus “Those who live by the sword will die by the sword.”

I recently reread Martin Luther King’s “Pledge of Nonviolence.” He asked masses of people to take the pledge, and it was one of the key motivators of mostly peaceful change in America during the civil rights movement.

Let us be fair. In the history of America, Christian churches and individuals have done an amazing amount of good. The drive to rid the country of slavery was church driven. The civil rights movement of the 1960s was church driven. The nation counts on the services of the Salvation Army and Catholic Social Services. We all benefit from Christian-based health and education networks.

However, Christian churches in America have utterly failed in communicating the message of peace and non-violence that is written in large letters in the teachings of Jesus. Just War Theory has been used to justify every war that America has chosen to wage.

Some timid churches have prided themselves as being tolerant toward this debate. But I believe Jesus would find the standard of tolerance disgusting. To be true to Jesus, Christians must be pro-active and shout the message of peace and non-violence from the rooftops.

I find the present upheaval in Christianity to be encouraging because people involved appear to be taking Jesus seriously. Jesus said that a small light could light up a whole room, that a bit of yeast could raise a whole loaf, and that a bit of salt could flavor the whole pot.

Our new crop of Jesus-followers is part of our nation’s hope, leading the country from war and violence to the Jesus way of peace and non-violence.

14 comments for “Can Christians Turn Away from War?”