Israeli repression of the Palestinians and Palestinian resistance toward the Israelis have laid the groundwork for another possible outbreak of disorder, a new intifada, which would present challenges to both sides and to the Obama administration, says ex-CIA analyst Paul R. Pillar.

Conditions seem to be as ripe as they have been for some time for the outbreak of a new Palestinian uprising, or intifada, in territory occupied by Israel. A hunger strike by several Palestinian prisoners held by the Israelis has been building suspense over what will happen when striking prisoners die.

Then over the weekend was the death of a different 30-year-old Palestinian in Israeli custody. Officially the cause was a heart attack, but Palestinians charge that an autopsy shows he was tortured. Israelis do not dispute at least some of the observations made during the autopsy but say that “fractures in the ribs” of the dead man “could be testimony to resuscitation efforts.” 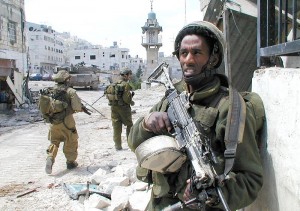 In a clash between Palestinian demonstrators and Israeli troops outside an Israeli military prison in the West Bank, several demonstrators were injured, by rubber bullets, not live ammunition, say the Israelis.

The best answer to the question of whether we are on the eve of a new intifada is: nobody knows. This is not just a cop-out, because any such outbreak is much more likely to be a basically unpredictable spontaneous happening rather than the product of anyone’s conscious decision.

Previous intifadas involved more spontaneity than was often perceived, because perceptions got shaped by spinning of the story to direct blame. Palestinian and Israeli leaders are already doing preemptive spinning in anticipation of a new uprising.

Palestinian president Mahmoud Abbas said on Monday, “The Israelis want chaos and we know it but we won’t let them.” Meanwhile, the Israeli government of Benjamin Netanyahu has tried to assign responsibility for keeping streets calm to Abbas’s Palestinian Authority.

Any analysis of how a new intifada would affect the interests of the leadership on each side is apt to yield mixed results. Probably there is ambivalence and internal disagreement on both sides as to likely costs and benefits.

For the Palestinians, unrest in the occupied territories has always drawn international attention to their plight in ways that diplomacy and lobbying alone cannot. One can fairly question whether the Oslo peace process of the 1990s would ever have happened without the first intifada, which began a few years earlier. Letting off steam against Israel in the streets might also help to divert, for a while, dissatisfaction with Abbas and his quasi-government.

The costs and risks for Palestinian leaders of an uprising are, however, substantial. They can themselves quickly become, along with the Israelis, targets for any mass letting off of steam. The Palestinian Authority would either take blame for stirring up the uprising or be shown to be impotent in its inability to control the Palestinian street.

Unrest would be inconsistent with the diplomatic and political direction Abbas set with his campaign for upgraded status at the United Nations. And any uprising would surely bring an Israeli response that would entail multiple negatives, including making the daily lives of ordinary Palestinians even more difficult than they are now.

For the Netanyahu government, a new uprising would have the attraction of offering a fresh argument for why it should not be pushed into a serious peace process. How do you expect us to try to negotiate an agreement, it would say, when all that we see on the other side is disorder and violence?

Any intifada, even one that began with mostly peaceful demonstrations, would inevitably spawn excesses that the Israelis could point to as evidence of malevolent Palestinian intent.

On the negative side of the ledger for the Israeli government, international reaction to an intifada would begin from a base that involves much more sympathy for Palestinians than it does for Israel. A new intifada would distract attention from Netanyahu’s drum-beating campaign of alarmism about Iran. And there would be the risk that some in the international community, and most importantly the U.S. administration, would see the unrest as all the more reason for reviving a peace process.

For the United States, the first thing to do is to be ready with a well-thought-out posture before a new intifada begins. The Obama administration cannot allow itself to look like it is scrambling to put together a position.

Then when (and “when,” rather than “if,” there is more unrest is the right formulation, even if the timing is unpredictable) an intifada begins, one major theme of such a position should be opposition to violence in all forms, whether the perpetrator wears a kaffiyeh or a military uniform.

Another theme should be that the unrest is indeed all the more reason to pursue vigorously a peace process, because the ultimate cause of the mess is continued occupation and denial of Palestinian political rights.

And then, don’t just stop at uttering themes. Use a new intifada as the occasion for abandoning past ineffective inertia and actually doing what is necessary, including exerting the necessary U.S. leverage, to resolve the underlying problem.

11 comments for “A Looming Crisis in Israel/Palestine”