In President Obama’s first term, he built a national security “team of rivals” and got mouse-trapped into a dubious Afghan War escalation. For his second term, he’s opted for people who share his views on more restrained military power and faces criticism for “group think,” says ex-CIA analyst Paul R. Pillar.

David Ignatius has an interesting take on national security decision-making in the Obama administration in the wake of the reshuffle of senior positions taking place during these early weeks of the President’s second term. Ignatius perceives certain patterns that he believes reinforce each other in what could be a worrying way.

One is that the new team does not have as much “independent power” as such first-term figures as Clinton, Gates, Panetta and Petraeus. Another is that the administration has “centralized national security policy to an unusual extent” in the White House. With a corps of Obama loyalists, the substantive thinking may, Ignatius fears, run too uniformly in the same direction. He concludes his column by stating that “by assembling a team where all the top players are going in the same direction, he [Obama] is perilously close to groupthink.” 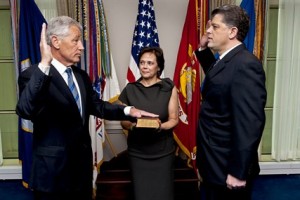 Former Sen. Chuck Hagel, R-Nebraska, took the oath of office to serve as the 24th Defense Secretary during a private ceremony at the Pentagon on Feb. 27, 2013. Michael L. Rhodes, the Defense Department’s director of administration and management, administered the oath as Hagel’s wife, Lilibet, held a Bible. (Defense Department photo)

We are dealing here with tendencies to which the Executive Branch of the U.S. government is more vulnerable than many other advanced democracies, where leading political figures with a standing independent of the head of government are more likely to wind up in a cabinet. This is especially true of, but not limited to, coalition governments.

Single-party governments in Britain have varied in the degree to which the prime minister exercises control, but generally room is made in the cabinet for those the British call “big beasts”: leading figures in different wings or tendencies in the governing party who are not beholden to the prime minister for the power and standing they have attained.

Ignatius overstates his case in a couple of respects. Although he acknowledges that Obama is “better than most” in handling open debate, he could have gone farther and noted that there have been egregious examples in the past of administrations enforcing a national security orthodoxy, and that the Obama administration does not even come close to these examples.

There was Lyndon Johnson in the time of the Vietnam War, when policy was made around the President’s Tuesday lunch table and even someone with the stature of the indefatigable Robert McNamara was ejected when he strayed from orthodoxy. Then there was, as the most extreme case, the George W. Bush administration, in which there was no policy process and no internal debate at all in deciding to launch a war in Iraq and in which those who strayed from orthodoxy, ranging from Lawrence Lindsey to Eric Shinseki, were treated mercilessly.

Obama’s prolonged, to the point of inviting charges of dithering, internal debates on the Afghanistan War were the polar opposite of this.

Ignatius also probably underestimates the contributions that will be made to internal debate by the two most important cabinet members in national security: the secretaries of state and defense. He says John Kerry “has the heft of a former presidential candidate, but he has been a loyal and discreet emissary for Obama and is likely to remain so.” The heft matters, and Kerry certainly qualifies as a big beast.

Moreover, the discreet way in which a member of Congress would carry any of the administration’s water, as Kerry sometimes did when still a senator, is not necessarily a good indication of the role he will assume in internal debates as Secretary of State.

As for Chuck Hagel, Ignatius states “he has been damaged by the confirmation process and will need White House cover.” But now that Hagel’s nomination finally has been confirmed, what other “cover” will he need? It’s not as if he ever will face another confirmation vote in the Senate. It was Hagel’s very inclination to flout orthodoxy, to arrive at independent opinions and to voice those opinions freely that led to the fevered opposition to his nomination.

Nevertheless, Ignatius is on to something that is at least a potential hazard for the second Obama term. The key factor is not so much the substantive views that senior appointees bring with them into office. As the clichÃ© goes, a president is entitled to have working for him people who agree with his policies. The issue is instead one of how loyalty, not only to the president, but collective loyalty as part of the president’s inner circle, may affect how senior officials express or push views once they are in office.

In this regard it is useful to reflect on the meaning of “groupthink.” The term has come to be used loosely as a synonym for many kinds of conventional wisdom or failure to consider alternatives rigorously. But the father of research on groupthink, the psychologist Irving Janis, meant something narrower and more precise.

Groupthink is pathology in decision-making that stems from a desire to preserve harmony and conformity in a small group where bonds of collegiality and mutual loyalty have been forged. It is the negative flip side of whatever are the positive attributes of such bonds. LBJ’s Tuesday lunch group was one of the original subjects of Janis’s writing.

With this in mind, the second term appointment that becomes even more interesting regarding Ignatius’s thesis is that of John Brennan. Ignatius has Brennan well-pegged, including a comment that he “made a reputation throughout his career as a loyal deputy.”

One might expand on that by observing that among Brennan’s talents, and they are considerable, is a knack for what is often called managing up. Earlier in his career he was a protÃ©gÃ© of George Tenet, and during the past four years he appears to have forged a similar relationship with Barack Obama.

One ought to ask what all of this might mean for Brennan’s ability and willingness to speak truth not only to power, but to his patron, and to do so especially at politically charged times when his patron may be under pressure or may have other reasons for wanting to move in a particular direction in foreign policy.

This is more of a question with Brennan than it would have been with David Petraeus if he were still the CIA director. Petraeus was very conscious of the truth-to-power issue, and more generally of the importance of objectivity, when he was appointed. As he himself observed, on matters relating to Afghanistan he might find himself “grading my own work.”

Because the issue was recognized and involved obvious matters such as the Afghanistan War, and because there was nothing even remotely resembling a patron-protÃ©gÃ© relationship between Petraeus and Obama, the issue was not destined to be a significant problem. The intimate, cloistered nature of the patronage involved in the Obama-Brennan relationship is something quite different.

Against this backdrop, and given how the Obama administration appears to have signed on to the conventional wisdom about unacceptability of an Iranian nuclear weapon, one ought to look more closely at a troubling line in Brennan’s statement submitted to the Senate Select Committee on Intelligence for his confirmation hearing.

In listing some of the national security challenges that require “accurate intelligence and prescient analysis from CIA,” the statement said: “And regimes in Tehran and Pyongyang remain bent on pursuing nuclear weapons and intercontinental ballistic missile delivery systems rather than fulfilling their international obligations or even meeting the basic needs of their people.”

Two countries, Iran and North Korea, get equated in this statement even though one already has nuclear weapons (and recently conducted its third nuclear test) while the other forswears any intention of building any. There are other related differences as well, including ones having to do with international obligations: North Korea renounced the Nonproliferation Treaty in 2003 and has been a nuclear outlaw for ten years, while Iran is a party to the treaty and conducts its nuclear work under IAEA inspections.

The judgment of the U.S. intelligence community is that Iran has not to date decided to build a nuclear weapon and, as far as the community knows, may never make such a decision. One would think that senators would be making better use of time if, instead of asking for the umpteenth time for still more information about the Benghazi incident, they would ask instead why the nominee to be CIA director, by saying that Tehran is “bent on pursuing nuclear weapons,” disagrees with a publicly pronounced judgment of the intelligence community.

If a crunch comes that is related to this issue, perhaps the rest of the intelligence community will play a beneficial role. I have been quite critical of the intelligence reorganization of 2004 as being a poorly thought-out response to the post-9/11 public appetite to do something visible that could be called “reform.”

The rapid turnover in the job of director of national intelligence is a symptom of the problems the reorganization has entailed. The current director, James Clapper, deserves the public’s thanks for taking a thankless job and performing it with distinction.

But maybe in the face of certain types of personal relationships and certain decision-making patterns, the new arrangement can have some payoffs. If Clapper, who does not figure into Ignatius’s discussion of Obama’s inner circle, becomes, on Iran or any other issue, a counterweight to any White House-centered groupthink that might emerge in that circle, he will have earned even more thanks.

← Are Some Big Donors Out There?
Courting Catastrophe in Syria →