The central contradiction in the cozy U.S. relationship with Israel is that the American system rejects religious and ethnic preferences and Israel embraces them. This intolerance is growing as ultra-Orthodox Jews direct discrimination against women, as ex-CIA analyst Paul R. Pillar notes.

From time to time we hear news from Israel that reflects growing religious intolerance there. An attention-getting story from a little more than a year ago concerned ultra-Orthodox men in the community of Beit Shemesh spitting on an eight-year-old girl and calling her a prostitute because her modest dress was not modest enough to suit them.

An immediate thought such incidents engender is how remarkably similar this is to the religious intolerance displayed by Muslim fundamentalists, including ones in Arab countries surrounding Israel. There is the same effort to impose sectarian preferences on a larger society. And there is the same gender discrimination involved in efforts to constrain and subjugate women. 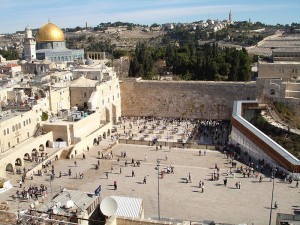 The Western Wall (also known as the Wailing Wall), the remnant of the wall that surrounded the Jewish Temple’s courtyard in the Old City of Jerusalem. (Photo credit: Golasso)

The very high birth rate among the ultra-Orthodox, and thus their growing demographic and political weight, underlies increasing intolerance in Israel. But there is more to it than that, in a state that defines its existence and character in terms of single religion or ethnicity. This definition not only implies second-class status for citizens not of that religion but also enlists the power of the state in the sectarian aims of whoever gets to specify in more detail the nature of the dominant religion.

It is that same power of the state, which was not involved in the incident with the spat-upon schoolgirl, that is the most noteworthy aspect of an incident this week at the Western Wall. Ten women, including two American-born rabbis, were arrested by Israeli police for praying there while wearing prayer shawls traditionally used by men.

This was not a demonstration by the women or an attempt by them to disrupt the peace. It may be disturbing enough for some that even a rabbi could not pray as she wished at a Jewish holy site. What should be even more disturbing is that police on the public payroll are enforcing such intolerance.

This incident and others like it inspire two further observations. The first is just to underscore the irony of the convergence of behavior by religious fundamentalists in Israel and those in Muslim-majority countries. Israel, given its current political direction, has walled itself off from its neighbors and accepts estrangement from them.

Israelis say we should be concerned about increased political roles assumed by religious fundamentalists in neighbors such as Egypt. And yet at the same time there is an increasing amount of behavior in Israel, supported or condoned by state power, that looks just like the behavior of those other fundamentalists.

The other observation is that this convergence with one of the more intolerant and ignoble aspects of life in the Middle East is part of a divergence of Israel from the values of its superpower patron, the United States. The notion of shared values has always been a leading rationale for the extraordinary patronage bestowed on Israel.

That notion always has been flawed, and it is becoming decreasingly credible. One of the basic flaws involves religion, with one state defined in terms of a particular religion and the other based on a separation of church and state.

Of course, there are fundamentalists in the United States who try to erode that separation, whether it is school boards messing with textbooks, employers wanting their personal religious beliefs to shape national laws regarding health care, or a fervently Christianist candidate (Rick Santorum) making a serious run for the presidency last year. But overall the establishment clause of the First Amendment is still operative.

A federal court in Minnesota reaffirmed that clause last month in dismissing a lawsuit contending that Hebrew National kosher hot dogs are not really kosher. That’s not the business of courts, this court properly decided. What makes a hot dog kosher is a religious question to be decided by rabbis in the private sector entities that certify such things. In the United States it is not a matter for judges, police or anyone else on the public payroll, any more than proper wearing of a prayer shawl would be a matter for them.

Freedom of the press is another First Amendment freedom where Israel diverges significantly from the United States. There is an irony here, too, in that there is freer discussion in Israel, including the Israeli press, than there is in the United States about basic issues of Israel’s direction and its relationship with the United States.

But on many other subjects the Israeli military censor heavily restricts what can be reported, as demonstrated by a story this week about a Prisoner X who mysteriously died in a high-security Israeli prison. In the most recent press freedom index calculated by Reporters Without Borders, Israel ranks 112 out of 179 nations worldwide. The United States is 32nd.

Then there is the issue of gender equality. In the United States the status of women has been improving at least since enactment of the Nineteenth Amendment. In many ways Israeli women enjoy more equality than in many other countries, but with the growing impact of religious fundamentalism on gender issues it would be hard to say that current trends in Israel are going in the same direction as the United States.

Finally there is the issue on which there is the greatest divergence, which concerns political rights for all regardless of ethnicity or religion. True, there are elements in the United States that are trying to mess with this one too, by making it harder for some segments of the population to exercise their right to vote. But with the United States there is nothing remotely comparable to the wholesale denial of political rights for entire ethnic groups that there is in territory controlled by Israel.