California is obsessed with a real-life crime drama, the story of a disaffected former Los Angeles police officer suspected of killing three people. Now the subject of a massive manhunt, the ex-cop has turned to Facebook to detail his grievances, notes Danny Schechter.

Only in California, home of the late Huey P. Newton and then the Symbionese Liberation Army that went several steps further, do characters emerge that transcend every action movie fantasy and stereotype, characters like an ex-cop who has declared war on the police on, of all places, Facebook in a 6,000-word statement that’s being described as “rambling.” (He never claimed he was writer.)

The ex-cop denounces police practices that he considers racist and abusive, although the sheer drama of the manhunt will make it unlikely that media outlets will seriously delve into the substance of his charges. Here is the full uncensored textof his posting. 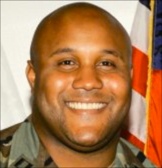 Former Los Angeles police officer Christopher Jordan Dorner, sought as a suspect in three homicides. (Photo supplied to the press by the LAPD)

Christopher Jordan Dorner is being pictured as the “mad man” of the hour, playing himself in the manhunt of the week, accused of three murders that he denies, or appears to deny as the author of a statement that’s being labeled a manifesto adding political weight to what began as a personal crusade for self-vindication.

He is a presented as an irrational and scary armed black man out for revenge. So far, he has eluded capture, out-maneuvering a small army of stalkers and posses in blue. He’s being pictured as a well-trained killing machine with every police force out to get him, perhaps Bin Laden style, before he gets a chance to speak to the public about his detailed grievances with the LAPD.

Dorner is clearly at war with his former colleagues, writing, “Unfortunately, this is a necessary evil that I do not enjoy but must partake and complete for substantial change to occur within the LAPD and reclaim my name.” Does that evil justify “murder?” Unclear!

This now a juicy media story. He has sent documents to journalists. He has praised CNN and MSNBC. The FBI is reportedly studying a package sent to Anderson Cooper. He is playing to the press and they are featuring him, but not in the way he would like.

As of Friday night, reports the New York Times, he has slipped away: “With the search for a former Los Angeles police officer wanted in three killings yielding no sign of him Friday morning in a snowy valley high in the San Bernardino Mountains, the authorities were wondering whether he had somehow managed to slip the dragnet.”  Great word, remember the police series, “Dragnet”?

The public has been terrified by the dramatic media coverage: “For the second day in a row,” the Times tells us, “local schoolchildren were getting a day off school, keeping them and their yellow buses off the mountain roads in the midst of the search Cindy Johnston, who lives in San Dimas, was in the Big Bear Lake area for the weekend to ski with her family and said: ‘We’re being a little bit more careful, but that’s about it. We’re keeping the kids closer together and not going out so much at night. I think he’d be stupid if he was here, and he doesn’t seem stupid. There are too many people looking for him’”

Remember those words: “He doesn’t seem stupid.” Dorner is treating his attempt to escape as a war game steeped in the alphabet soup lexicon of covert ops, telling his former colleagues:

“I know your TTP’s, (techniques, tactics, and procedures). Any threat assessments you generate will be useless. This is simple, I know your TTP’s and PPR’s. I will mitigate any of your attempts at preservation. ORM is my friend. I will mitigate all risks, threats and hazards. I assure you that Incident Command Posts will be target rich environments. KMA-367 license plate frames are great target indicators and make target selection even easier.

“I will conduct DA operations to destroy, exploit and seize designated targets. If unsuccessful or unable to meet objectives in these initial small-scale offensive actions, I will reassess my BDA and re-attack until objectives are met. I have nothing to lose. My personal casualty means nothing. Just alike AAF’s, ACM’s, and AIF’s, you cannot prevail against an enemy combatant who has no fear of death. An enemy who embraces death is a lose, lose situation for their enemy combatants.”

Mike Ruppert, a former LAPD cop often accused of being a conspiracy theorist, is not buying the official story. He writes: “Chris Dorner could possibly break down all of law enforcement in SoCal and also foment internal revolts inside law enforcement. He is a supremely-skilled warrior and living proof of the psychosis that comes from training warriors, telling them they are honorable, and then tasking them to kill women and non-combatants exactly as he is now doing here at home. He apparently has a little more control of his ROE than US personnel have used in combat in Iraq and Afghanistan.

“I am still digesting. I have read most of his so-called ‘manifesto.’ It is not a manifesto. It is an indictment. It makes complete sense to me. I believe all of his allegations and I suspect that Shamar Thomas and Captain Ray Lewis do too. While not condoning, but absolutely understanding his reasoning, I think he is being taken with the utmost seriousness because he can do real damage to institutions and ‘the s…ystem’ as a whole.

“I can say several things with certainty. He is scaring the shit out of people in Washington, DC, at the FBI, at the DoJ, at the Pentagon and at CIA. This is a warrior capable of wreaking havoc. He’s already provoked a mistaken-identity shooting of innocents in Torrance.”

(CLG reports: “A lawyer says two women delivering newspapers had no warning before they were mistakenly shot by Los Angeles police officers searching for triple murder suspect Christopher Dorner. Investigators say 47-year-old Maggie Carranza and her 71-year-old mother Emma Hernandez were in a Toyota Tundra pickup truck similar to Dorner’s vehicle. They were delivering newspapers in Torrance when LAPD officers guarding a target named in Dorner’s manifesto peppered the pickup with bullets, wounding the women, before dawn on Thursday.”)

Adds Ruppert, “At this moment I am absolutely certain that covert CIA/JSOC hit teams are being deployed all over Southern California. Their urgent orders would be to ‘kill on sight.’ The last thing anyone wants now is for him to come in alive and testify.”

That may be, but there is no evidence yet for this hyperbolic and sensational claim. Ruppert does make more sense in his conclusion: “I just hope he understands that he can do far more damage alive than dead.”

Dorner is disturbed, for sure, but has also, no doubt, had lots of disturbing experiences. I can’t comment on his mental condition but there is a lot that is maddening and mad in that culture. He’s not the first cop to go off, violently. Some kill their families before killing themselves.

The plot is thickening. What makes it fascinating too is that Dorner is no ideological lefty, he says he likes Bush Sr. He references his detailed experiences in the police culture. They sound very believable, but this is a culture that is barely covered and where dissidents rarely enjoy any sympathy. Let’s hope that this man will survive but, given the forces ranged against him, and given the “shoot first, ask questions later” MO that characterizes police reactions in the increasingly common violent incidents like this, that may be asking a lot.

My suggestion to him is to do what another alleged “cop killer” did in New York in the early 1960s. His name was Jerry Rosenberg, a.k.a “Jerry the Jew,” who became well known later during the Attica rebellion. At the time of his crime, he was a young man, a driver in a robbery that turned violent resulting in the death of two police officers. There was a huge manhunt out to get him. It was a headline story in all the tabloids. He claimed he shot no one and turned himself into the Daily News newsroom in New York, after he stripped naked and had pictures taken to show he had not been beaten. He used the media to survive certain capture and probably execution.

Armed police surrounded the building. Threats were made. But the newspaper turned him over in the glare of publicity, and he was not killed or brutalized. He was, however, later convicted on a felony murder charge that held that if he took part in the robbery, he could be held accountable for what happened there. He was sentenced to death but the sentence was later reduced to life imprisonment. He later became a well-known prison lawyer and died of natural causes in 2009 after serving 46 years in state prisons.

Stay tuned. There is more to come in this escapade of life imitating the movies. And speaking of movies, what California studio will get the movie rights? Has reality finally outdone the big screen?