President Obama’s defenders note he ended the Iraq War, is drawing down forces in Afghanistan and has resisted a new war in Syria. In other words, they say drone attacks on al-Qaeda suspects have ratcheted down the levels of violence left behind by President Bush. But critics say the drone attacks are still war crimes.

New disclosures regarding President Barack Obama’s use of armed drones to hunt down and kill suspected al-Qaeda terrorists thousands of miles from the United States raise troubling questions about the U.S. Constitution and international law.

In the following interview with Dennis J. Bernstein of Pacifica’s “Flashpoint” program, Marjorie Cohn, professor at the Thomas Jefferson School of Law and former President of the National Lawyers Guild, assesses a White Paper from the Justice Department summarizing the legal arguments justifying the drone attacks. 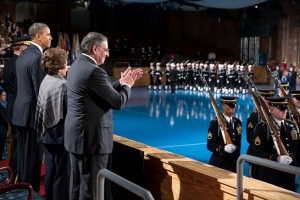 MC: The White Paper allows the government to kill a U.S. citizen who is not on the battlefield, if some high government official who is supposedly informed about the situation thinks that the target is a senior Al Qaeda leader who poses an imminent threat of a violent attack against the United States. So how do they define “imminence”? Well, it doesn’t require any clear evidence that a specific attack on U.S. persons and interests will take place in the immediate future.

So it completely dilutes this whole idea of imminent threat. Under well-established principles of international law and the UN Charter, one country can use military force against another only in self-defense. But under the Caroline case, which is the gold standard here, the “necessity for self-defense must be instant, overwhelming, leaving no choice of means, and no moment for deliberation.” That means we are going to be attacked right away and we can use force.

But the very nebulous test that the White Paper lays out even allows the targeted killing of somebody who is considered to be a “continuing” threat, whatever that means. The most disturbing part of it says that U.S. citizens can be killed even when there is no “clear evidence that a specific attack on U.S. persons and interests will take place in the immediate future.”

So we have a global battlefield, where if there is someone, anywhere, who might be associated with Al Qaeda, according to a high government official, then Obama can authorize (it’s not even clear Obama himself has to authorize these targeted killings, these drone attacks) on Terror Tuesday (thanks to the New York Times expose several months ago) who he is going to kill after consulting with John Brennan.

John Brennan, of course, is his counter-terrorism guru who is up for confirmation to be CIA Director. Very incestuous. John Brennan has said that targeted killings constitute lawful self-defense.

One of the most disturbing things here is the amassing of executive power with no review by the courts, no checks and balances. So the courts will have no opportunity to interpret what “imminence” means, or what “continuing” threat means. The White Paper cites John Yoo’s claim that courts have no role to play in what the President does in this so-called War on Terror where the whole world is a battlefield. I say so-called War on Terror because terrorism is a tactic. It’s not an enemy. You don’t declare war on a tactic.

And the White Paper refers to Yoo’s view that judicial review constitutes “judicial encroachment” on the judgments by the President and his national security advisers as to when and how to use force. The White Paper cites Hamdi v. Rumsfeld which says the President has the authority to hold US citizens caught on the battlefield in Afghanistan as enemy combatants. But in Hamdi, the Supreme Court stated that a U.S. citizen who is being detained as an enemy combatant is entitled to due process. Due process means an arrest and a fair trial. It doesn’t mean just taking him out with a drone.

Also, there’s another interesting passage in this White Paper. It says “judicial enforcement [a court reviewing these kill orders of the executive] of such orders would require the court to supervise inherently predictive judgments by the President and his national security advisers as to when and how to use force against a member of an enemy force against which Congress has authorized the use of force.” Inherently predictive. Does that mean that the court can’t review decisions made with a crystal ball because it’s too mushy? I don’t know.

Certainly courts are competent to make emergency decisions under FISA, the Foreign Intelligence Surveillance Act. The FISA Court meets in secret and authorizes wiretaps requested by the Executive Branch. Courts can do this. Courts can act in emergencies to review and check and balance what the executive is doing. That’s what our Constitution is all about.

DB: Congress is looking for some original documents about what’s going on here. The White Paper is sort of a restatement of national security documents that we probably haven’t been able to see yet. What about the Geneva Conventions? It sort of throws that in the garbage.

MC: Well, it does because the Geneva Conventions define willful killing as a grave breach. And grave breaches are punishable as war crimes. So this also violates the Geneva Conventions. Although the White Paper says that they are going to follow the well-established principle of proportionality – proportionality means that an attack cannot be excessive in relation to the anticipated military advantage – I don’t see how they can actually put that into practice because the force is going to be excessive. When you see how they are using drones, they are taking out convoys, and they are killing civilians, large numbers of civilians.

There’s another principle of international law called distinction, which requires that the attack be directed only at legitimate military targets. We know from the New York Times exposÃ© that the kill list that Brennan brings to Obama to decide who he is going to take out without a trial – basically execute – can be used even if they don’t have a name, or if they are present in an area where there are suspicious “patterns of behavior.” These are known as signature strikes. That means that bombs are dropped on unidentified people who are in an area where suspicious activity is taking place.  That goes even beyond targeted killings.

Targeted killings are considered to be illegal. The UN Special Rapporteur on Extrajudicial Summary or Arbitrary Executions, Christof Heyns, expressed grave concerns about these targeted killings, saying that they may constitute war crimes. He called on the Obama administration to explain how its drone strikes comport with international law and to specify the bases for the decisions to kill rather than capture particular individuals.

The White Paper says that one of the requirements before they can take someone out is that capture is “infeasible.” As you go on and read this memo, infeasible begins to look like inconvenient. We have these very mushy terms, with no clear standards that comply with international law. Yet there is no oversight by any court, and Congress has no role either. So we don’t have checks and balances.

Even the Authorization for the Use of Military Force (AUMF) that Congress passed a few days after 9/11 doesn’t authorize this. The AUMF allows the President to use force against groups and countries that had supported the 9/11 attacks. But when the Bush administration asked Congress for open-ended military authority “to deter and preempt any future acts of terrorism or aggression against the United States,” Congress specifically rejected that open-ended military authority. Congress has not authorized this, and it’s not clear whether Congress would authorize it.

DB:  When one looks at this Obama policy and compares it to Bush, essentially Obama has chosen, well, we’ll do a little less torture, or skip the torture, and we’ll just kill them.

MC: Obama has expanded these drone attacks far beyond what the Bush administration was doing. There are many thorny issues, such as indefinite detention, how detainees are treated, and under what circumstances they can be released. The Obama administration evidently feels that it’s cleaner and easier just to kill them. Then you don’t have to worry about bad publicity from housing them at Guantanamo, not giving them a fair trial, holding them indefinitely. This goes beyond the torture policy.

Now I don’t want to say that killing with drones is worse than the illegal and outrageous invasions of Iraq and Afghanistan that the Bush administration began, in which thousands and thousands and thousands of people have been killed or seriously maimed. So I wouldn’t say that Obama is worse than Bush. But certainly Obama is following in the tradition of the Bush administration and John Yoo’s expansive view of executive power where whatever the President does is unreviewable.

DB: I would say they continue the process of destroying the Bill of Rights, the Constitution and the necessary checks and balances that restrain war, that the people depend on.

Marjorie Cohn is a professor of human rights at Thomas Jefferson School and former president of the National Lawyers Guild. Her most recent book is The United States and Torture: Interrogation, Incarceration, and Abuse. See www.marjoriecohn.com.

4 comments for “Assessing the Laws of the Drone Wars”