Confirmation hearings for John Brennan to head the CIA will give Congress and the American people their first chance for some public airing of the secret drone program that has struck at suspected al-Qaeda terrorists, including U.S. citizens, as ex-CIA analyst Paul R. Pillar explains.

John Brennan, unlike Chuck Hagel, does not appear to have said things publicly that the Israel lobby has taken as a call to arms. Also unlike Hagel, he is not seen as a turncoat by diehard supporters of the Iraq War who are unwilling to admit a mistake. 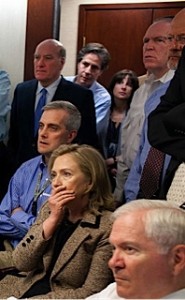 One such reason is that Congress and the public have been given no other good opportunity to examine the basis and rationale for a major program or policy, especially a controversial one. That is the situation regarding the use of armed drones to kill people.

A Justice Department white paper, leaked, not officially released by the administration, is the closest thing to an authoritative public look we have been given regarding the legal justification for the drone campaign. Despite repeated requests from members of Congress, the administration refused, until the evening before Brennan’s hearing, to share with congressional committees the more formal underlying legal memoranda.

Some excellent critiques of the strained reasoning in the white paper have been written, including by James Joyner and by Rosa Brooks. They have pointed out the vagueness and shakiness that characterizes the paper on matters ranging from what constitutes an imminent threat to who has the authority to issue an order to kill.

Without repeating the excellent points in the critiques, I would only note one of the implications about which Americans do not seem to be aware: that accepting this rationale for the campaign means signing up for a war that is endless in both time and scope.

The white paper returns again and again to the notion that the United States is “in an armed conflict with al-Qa’ida and its associated forces.” The idea, in other words, is that the United States is fighting a war against a supposedly coherent, identifiable enemy, just as when it fought wars against Nazi Germany or Saddam Hussein’s Iraq. Without that concept of a war, the whole legal case and everything it says about due process and rights of accused citizens and all the rest falls apart.

But whatever is represented by the term “al-Qa’ida and its associated forces” isn’t anything like Germany or Iraq. It is a will-o’-the-wisp of an enemy. The original al-Qa’ida that Americans came to know and fear after 9/11 is a decimated residue in South Asia. Various other violent groups in other regions have, for various reasons of their own, decided to adopt the al-Qa’ida brand. That brand name represents not a coherent, identifiable enemy but instead an ideology, which isn’t even necessarily the main driver of behavior for many of those who use the brand name.

Al-Qa’ida is a variable and inchoate set of ideas that involve a mixture of Sunni radicalism and violence as political action, with a transnational tinge. Americans ought to be concerned about how, with the white paper stating that targets of the drones do not need to be directly involved in any known terrorist plots, the killing program comes close to the handing down and carrying out of death sentences, even on U.S. citizens, without any involvement of a court and at the say-so of “an informed, high-level official,” for holding a set of ideas.

Americans ought to be concerned as well about other things regarding the drone campaign; the endless and limitless nature of the program that is implied by the legal rationale for it is certainly one of those things. More groups can and probably will adopt the al-Qa’ida brand. Some of those groups may not have yet come into existence.

And terrorism, which has been used for millennia, will be around indefinitely. Of course, most Americans did not think they were signing up for an endless war. But unless the basis for it is circumscribed and justified with more precision than it has been so far, an endless war is what they got.

The American public, and its habits of thinking about terrorism, deserve much of the blame for getting in this situation. Thinking of counterterrorism as a “war” is the original mistake. There were more parochial political interests that pushed this idea, but it resonated with the Jacksonian fibers in the American public, which readily adopted it especially after 9/11.

Another unfortunate habit of public thought is the zero-tolerance outlook toward terrorism, which has motivated officials to push legal and moral envelopes, and to incur other costs and international political damage, in order to insure that even if they cannot prevent all terrorist incidents on their watch they at least can say afterward that they did everything possible to avoid them.

Witness the uproar even after a non-fatal near-miss, such as the attempted attack by the underwear bomber in December 2009. This week’s nominee was the principal official who after that incident had to go before the cameras and issue a mea culpa on behalf of himself and his colleagues.

Although public attitudes laid the groundwork for a limitless killing program, public attitudes are doing little or nothing to help impose better limits. This involves another respect in which the drone program is different from traditional wars: there are no direct American casualties (and even the monetary costs are very small compared to those traditional wars). Therefore, whatever concerns about the program get expressed at this week’s confirmation hearing, they will not involve political forces anywhere near as strong as those associated with either the Israel lobby or cognitive dissonance about the Iraq War.

If a political motivation is to be engaged, it will have to involve senior people in the administration and especially the President himself thinking along a line suggested by Jack Goldsmith, an assistant attorney general in the George W. Bush administration.

In an op-ed calling for a newer and sounder statutory basis for activities such as the drone strikes, Goldsmith observes that the absence of such a basis “is unfortunate for the president, not only because he increasingly acts without political cover, and because his secret wars are increasingly criticized and scrutinized abroad, but also because he alone will bear the legacy of any negative consequences, at home and globally, of unilateral, lethal, secret warfare.”

3 comments for “A Chance to Debate the ‘War on Terror’”