Exclusive: The Obama administration is under fire for its secret policy of using drone strikes to kill alleged al-Qaeda terrorists, including Americans. But the public suspicion is heightened by frustration over decades of excessive government secrecy and deception, says Robert Parry.

The United States is a nation foundering in a vast sea of secrets, with government officials showing little regard for the damage that is done to a democratic Republic by withholding millions upon millions of documents from the people.

Some of these excessive secrets relate to current events, such as the unwillingness of the Obama administration to explain its legal reasoning for drone strikes against suspected al-Qaeda terrorists. While there may be some legitimate operational secrets involved, great harm is inflicted on the public trust from refusing to release the parameters and rationale for the program. 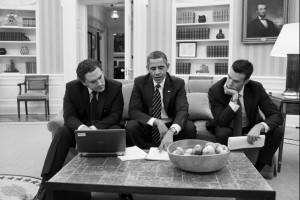 President Barack Obama meeting in the Oval Office with two of his speechwriters on Feb. 5, 2013. (White House photo by Pete Souza)

The not-unreasonable assumption among many Americans is simply that there is no legal coherence to the policy, at least not one that can be defended in the court of public opinion. Many Americans thus conclude that the government is arrogant, a judgment that runs parallel to an opinion held by many people in Yemen and other countries where drone strikes have occurred.

This image of a hubristic United States has its own negative consequences. It feeds not only anti-Americanism abroad but a sense of alienation at home. Many Americans see democracy as not only short-circuited by all the manipulative political techniques bought by billionaires but by an intentional starving of an informed electorate denied factual sustenance by the government.

This alienation, in turn, is feeding the heated controversy that has played out this week over NBC’s disclosure of the Obama administration’s white paper, which was provided to Congress summarizing what is contained in a longer classified version of the legal arguments that justify the killing of al-Qaeda suspects, including Americans.

The Justice Department’s white paper said it is lawful for “an informed, high-level official” of the U.S. government to authorize the killing of an American if the target is a ranking figure in al-Qaeda who poses “an imminent threat of violent attack against the United States” and if capture isn’t feasible.

The disclosure of the white paper has heated up the debate inside the United States about how such “targeted killings” are done and why the Obama administration has resisted a full discussion of the practice and any legal safeguards that might be applied, such as requiring review by a special court or at least treating such extraordinary overseas slayings with a review similar to what police face when they use deadly force.

A History of Doubt

This debate also is occurring amid a growing popular distrust toward an overly secretive government. The American people intuitively understand that they are being kept in the dark about some of the most vital decisions that a country must undertake, including issues of war and peace. At high levels of government — among both Republicans and Democrats — there exists the benighted view that sharing information with the public is a messy business that is most easily resolved by simply keeping as many secrets as possible.

Sometimes, the motivation is sinister, such as when governments want to lead the American people into warfare and do so by inundating them with propaganda. A decade ago, President George W. Bush applied that strategy to get his war of choice in Iraq. Other times, the secrecy is more the result of timidity or bureaucratic inertia. It is much safer, career-wise, to withhold information than to release it.

Remarkably, despite the many deceptions surrounding the wars in Iraq and Afghanistan, the most severe punishments have been meted out to Americans who have exposed the truth, not those who have hidden it. For instance, Pvt. Bradley Manning is likely to spend much of his young life in prison for releasing government information to WikiLeaks, while senior Bush administration officials who helped spin a giant web of lies have escaped any meaningful accountability.

But the secrecy problem is deeper than these more recent events. On Tuesday, I spent a day at Ronald Reagan’s presidential library in Simi Valley, California, poring through files that date back three decades. I discovered that Freedom of Information Act requests that I filed years ago have failed to gain the release of thousands of pages of documents, which probably never should have been secret in the 1980s, let alone in the second decade of the 21st Century.

Ironically, some of my FOIAs related to Reagan’s aggressive use of propaganda and disinformation to herd the American public behind his policies in Central America and the Near East. Since Reagan’s techniques were sometimes hatched inside the CIA and the national security establishment, each of those agencies gets a chance to object to the release, meaning that the process for declassification can go on for many years.

So, the American people are even denied the facts about how they were manipulated 30 years ago. And this hidden history is not irrelevant to the present. Not only were Reagan’s state-of-the-art techniques for controlling public opinion passed on to subsequent administrations but some of the false narratives that Reagan’s spin-masters twirled continue to misinform public policy to this day, such as misleading perceptions of how the conflict in Afghanistan originated.

The interminable delays in releasing the true historical record also means that some of this history will be lost forever. Many documents, even when they are finally released, do not clear up all the mysteries. Often, you have to track down the officials involved. But if they are no longer alive, serious gaps will remain.

Plus, the notion that some brilliant historian will someday review the fuller record and grasp all its nuances is largely a myth. Many crucial details only make sense to people who were close to the actual events, whether policymakers or journalists. Once that knowledge is lost, it can’t be recreated.

Yet, disclosure of secrets whether past or present remains a low government priority. Indeed, when President Barack Obama began his administration by releasing some secret Justice Department rationalizations for torture, he came under intense criticism from Republicans and their right-wing media allies. The experience seems to have chastened him. It certainly has not been a “mistake” that he has repeated often.

There are always plenty of “tough-guy” reasons why releasing information is tantamount to helping the “enemy.” But the long-term consequence of this incessant secrecy is to undermine public trust in government and thus to endanger the future of democracy. Plus, excessive secrecy breeds so much suspicion that it erodes acceptance of secrecy in those moments when it is truly necessary.

13 comments for “How Secrecy Corrodes Democracy”