Mutual distrust between the U.S. and Iran may be the biggest obstacle to an agreement on curtailing Iran’s nuclear program and easing international sanctions. But the best hope for progress would be a readiness among Western powers to lift sanctions in exchange for a nuke deal, writes ex-CIA analyst Paul R. Pillar.

The longer the impasse over Iran’s nuclear program continues, the more evident are the similarities in how the American and Iranian bodies politic react to such confrontations.

The similarities between the United States and Iran that are involved in this matter actually go beyond the negotiating stalemate itself and involve some of the false assumptions that have made the possibility of an Iranian nuclear weapon seem like such a big frightening deal in the first place. 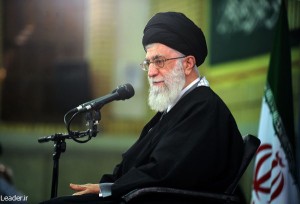 One of those assumptions is that turban-wrapped Iranian heads work in a fundamentally different way from unwrapped Western heads, in that they are more concerned about an afterlife and less susceptible to being deterred in the current life. In fact, the behavior of Iranian leaders gives no support for that assumption; the principles of deterrence apply as much to them as to American or other leaders. The turbaned heads work in basically the same way in that regard as unturbaned ones.

Now the negotiating difficulties are putting on display other similarities between Iranians and Americans. A round of negotiations between Iran and the United States and its P5+1 partners that had been expected to be convened about now has not done so, as the two sides dicker over agendas and venues.

The Iranians have been the more troublesome side lately, going back and forth on the question of a venue even though the P5+1 seem willing to meet just about anywhere. So we are hearing again on the American side familiar expressions of doubt as to whether the Iranians really want to negotiate an agreement.

Those doubts are mirrored on the Iranian side, which has been given plenty of reason to question whether the United States and its Western partners really want to negotiate an agreement. Although the P5+1 are flexible about where to talk, they continue to be inflexible regarding the subject about which Iran has the most reason to talk, which is how to gain relief from economic sanctions.

The P5+1 have put no proposal on the table that includes any significant sanctions relief, and the indications are that they have no intention of making any such proposal in the next round.

The P5+1’s inflexibility very likely is the main factor underlying the diplomatic dance that the Iranians are doing right now and that is delaying the convening of a new round of talks. The Iranians may not want to be blamed if a new round is seen as a failure, which it would be if the inflexibility about sanctions continues.

The Iranians may also see dickering over the terms for convening the next round as one of their few attention-getting ways of expressing displeasure over that inflexibility. Trita Parsi assesses that Tehran is probably miscalculating if it thinks it will be blamed and criticized more for participating in talks that fail than for not talking at all.

That assessment may be correct, but it leads to another U.S.-Iranian similarity. Americans have repeatedly shown an affinity for the notion (U.S. policies toward the Palestinian-Israeli conflict provide an obvious, but by no means the only, example of this) that trying to negotiate and falling short is worse than not negotiating at all, no matter how much the underlying problem continues to fester. Now the Iranians are showing a bit of the same tendency.

Then there is the trait that Iranians and Americans share with not only each other but also many other nationalities: the belief that showing toughness is the key to successful bargaining. The American side has repeatedly displayed that belief with the piling on of sanctions on top of sanctions and all the tough talk about the military option, in addition to the negotiating inflexibility regarding sanctions relief.

On the Iranian side, an additional reason for the current balking about convening a new round of negotiations may be to show toughness, to send a message that Iran is not hurting so much from sanctions that it is anxious to strike a deal. Ali-Akbar Velayati, a senior adviser to the Iranian supreme leader, tried to send such a message when he said on Saturday, “Today, the United States is weaker than the time when it attacked Iraq and Afghanistan, and Iran is currently far stronger than Iraq and Afghanistan.”

As a negotiating process drags out with fits and starts and interruptions, one hears more questioning about whether the other side is trying to drag it out indefinitely. This entails another similarity between the two sides, one related to underestimation of the opposite side’s willingness to cut a deal.

One has already heard lots of talk in the United States about how maybe Iran is just trying to drag out negotiations to give those centrifuges more time to spin and to get closer to being able to construct a nuclear weapon on short notice.

A mirror image concern among Iranians, who are hurting from the sanctions and who also have heard plenty of talk in the United States about regime change, is that the United States is just trying to drag out negotiations to give the sanctions time to have even more of an effect, leading perhaps to severe political instability and a toppling of the Iranian regime. The inflexibility of the P5+1’s negotiating posture regarding sanctions lends credibility to this hypothesis in Iranian eyes.

The late Paul Warnke, who was the chief arms control negotiator in Jimmy Carter’s administration, wrote an article in 1975 that was a critique of the U.S.-Soviet arms race and was titled, “Apes on a Treadmill.” Warnke saw the two superpowers as waging an endless competition that was not in either country’s interest and argued that the United States should take the first step off the treadmill.

There are many differences, of course, between the U.S.-Soviet competition in strategic arms and the current confrontation between the United States and Iran. The most obvious one, apart from Iran being nothing close to a superpower, is that on the Iranian side there are no nuclear weapons, the regime says it does not want such weapons, and the U.S. intelligence community says the regime has not decided to build such weapons. The nuclear weapons most involved are the ones owned by Israel, which wants to preserve its regional nuclear weapons monopoly.

One might try to dismiss Warnke’s perspective of the mid-1970s by arguing that in the 1980s, the intensified arms race that Ronald Reagan declared contributed to the collapse of the Soviet Union. One might carry that reasoning further by arguing that sanctions on Iran today are the analogue to Reagan’s arms race.

Far too much is problematic in such arguments, if not the first part about the USSR then certainly the second part about the political effects of sanctions, to accept them as valid. But in the meantime, if such reasoning were the basis for U.S. strategy and posture, it would only confirm Tehran’s suspicions about the real U.S. objectives, further discouraging Iran from making concessions and probably precluding a negotiated agreement.

In a less substantively specific and more metaphorical sense, the current U.S.-Iranian relationship bears much resemblance to Warnke’s apes on a treadmill. It may be easy to find aspects of Iranian behavior that appear obstinate and apelike, but hold up a mirror and one will see very similar aspects on the other side.

Some of the attitudes are deeply engrained in habitual ways of looking at foreign confrontations and would be hard to change. But taking a step the United States has not yet taken, using sanctions for their declared purpose as leverage in obtaining a negotiated agreement, would make such an agreement possible and would be a step off the treadmill.

← Defending Guns, Ignoring ‘Due Process’
The Choice of Guns Over Butter →