Exclusive: Reacting to President Obama’s modest executive orders on gun safety and his proposed legislation to Congress, the Right is engaging in hysterical rhetoric about “tyranny” and riling up angry whites to arm themselves. But key Republicans can’t even get their historical facts straight, notes Robert Parry.

One conceit of America’s right-wingers is that they respect U.S. history and especially the Constitution in ways that other Americans don’t. But not only has the Right absorbed a grossly distorted idea of the Constitution but many prominent conservatives have a shoddy understanding of history, most recently revealed by Sen. Rand Paul.

On Wednesday, the Kentucky Republican appeared on Fox News to liken President Barack Obama’s executive orders on gun safety to the behavior of President Franklin Delano Roosevelt, who guided the nation through much of the Great Depression and World War II. 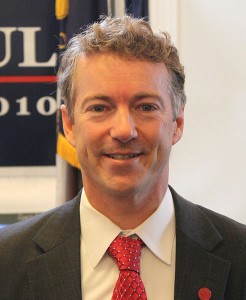 According to Paul’s version of that history, “FDR had a little bit of this ‘king complex’” like Obama, so “we had to limit FDR finally because he served so many terms that I think he would have ruled in perpetuity, and I’m very concerned about this president [Obama] garnering so much power and arrogance that he thinks he can do whatever he wants.”

Roosevelt died shortly into his fourth term in 1945. The 22nd Amendment was passed by Congress in 1947 and ratified by the states in 1951. In other words, Roosevelt was no longer around at the time of the 22nd Amendment.

Paul’s erroneous history puts him in the company of other prominent Republicans who profess to love American history and the Constitution, but don’t seem interested enough to get their facts straight. For instance, several GOP candidates for President in 2012, including one who served as governor of Massachusetts, displayed ignorance of basic facts about the American Revolution.

Mitt Romney, who served four years as governor of the state where the war began, wrote in his book, No Apology: The Case for American Greatness, that the Revolutionary War began in April 1775 when the British attacked Boston by sea. “In April 1775, British warships laid siege on Boston Harbor and successfully took command of the city,” Romney wrote.

However, in the actual history, the British military controlled Boston long before April 1775, garrisoning Redcoats in the rebellious city since 1768. The British clamped down more tightly after the Boston Tea Party on Dec. 16, 1773, imposing the so-called “Intolerable Acts” in 1774, reinforcing the Boston garrison and stopping commerce into Boston Harbor.

The aggressive British actions forced dissident leaders Sam Adams and John Hancock to flee the city and take refuge in Lexington, as colonial militias built up their stocks of arms and ammunition in nearby Concord.

The Revolutionary War began not with British forces seizing Boston in April 1775 as Romney wrote, but when the Redcoats ventured forth from Boston on April 19, 1775, to seize Adams and Hancock in Lexington and then go farther inland to destroy the colonial arms cache in Concord.

The British failed in both endeavors, but touched off the war by killing eight Massachusetts men at Lexington Green. The Redcoats then encountered a larger force of Minutemen near Concord Bridge and were driven back in a daylong retreat to Boston, suffering heavy losses. Thus, the Revolutionary War began with a stunning American victory, not with the American defeat that Romney described in a book that he claims to have written himself.

Romney’s misrepresentation of the start of the war is particularly stunning because Massachusetts celebrates the battles of Lexington and Concord every year in a holiday called Patriots Day, with the Boston Red Sox playing an unusual morning game so fans can exit Fenway Park in time to watch the end of the Boston Marathon.

Other rivals for the 2012 Republican presidential nomination also got basic facts about the nation’s founding wrong.

Texas Gov. Rick Perry put the American Revolution in the 1500s. “The reason that we fought the revolution in the 16th Century was to get away from that kind of onerous crown if you will,” Perry said, missing the actual date for the war for independence by two centuries and even placing it before the first permanent English settlement in the New World, Jamestown, Virginia, in 1607, the first decade of the 17th Century.

While pandering to Tea Party voters in New Hampshire, Rep. Michele Bachmann of Minnesota declared, “You’re the state where the shot was heard around the world in Lexington and Concord.” (She may have gotten confused because there is a Concord, New Hampshire, as well as a Concord, Massachusetts.)

More significantly, however, the American Right has inculcated in its followers a bogus idea of what the U.S. Constitution did. Typically, the Right’s founding narrative jumps from the Declaration of Independence in 1776 to the Constitution, which was written in 1787 and ratified in 1788. What is usually left out is the nation’s experience with the Articles of Confederation, which governed the new nation from 1777 to 1787.

By ignoring the Articles, the Right can pretend that the Constitution was written with the goal of establishing a system dominated by the states with the central government kept small and weak. That version of history then is cited to support right-wing claims that federal officials, such as Roosevelt and Obama, violate the Constitution when they seek national solutions to the country’s economic and social problems.

However, in the real history, the Framers of the Constitution, particularly George Washington and James Madison, were rejecting the structure of “independent” and “sovereign” states (with a weak central government or “league of friendship”) as established by the Articles of Confederation. The Framers had witnessed how that system had failed and how it was threatening the future of the newly independent nation.

Gone was the language in the Articles about “sovereign” and “independent” states. Instead, national sovereignty was shifted to “We the People of the United States.” The new Constitution made federal law supreme and granted the central government sweeping new powers over currency and commerce as well as broad authority to act on behalf of the “general Welfare.”

Washington and Madison also circumvented the state legislatures, putting the new Constitution before special conventions and requiring only approval of nine of the 13 states for ratification. The proposed changes were so radical that a determined opposition arose, known as the Anti-Federalists.

To save his plan, Madison joined in writing a series of articles called the Federalist Papers, in which he mostly tried to downplay how radical the changes actually were. He also agreed to tack on a Bill of Rights, spelling out specific guarantees for individuals and the states.

So, the Tenth Amendment despite efforts by today’s Right to exaggerate its significance was mostly a sop to the Anti-Federalists. To recognize how insignificant it is, it should be contrasted with Article Two of the Articles of Confederation, which it essentially replaced. [See Robert Parry’s America’s Stolen Narrative.]

Today’s Right also has misrepresented the original intent of the Second Amendment, which reads: “A well-regulated Militia, being necessary to the security of a free State, the right of the people to keep and bear Arms, shall not be infringed.” This concession also was primarily to the states which wanted militias to maintain “security.”

The context for those concerns related to the recent experience of Shays’ Rebellion in western Massachusetts (in 1786-87) as well as the fear of slave revolts in the South and raids by Native Americans on the frontier. The states wanted their own militias to put down such uprisings.

In the early days of the Republic, the Second Amendment also was not seen as a universal right for individuals. For instance, some states passed “Black Codes” that barred all African-Americans from owning guns. When the Second Congress passed the Militia Act of 1792, the law specified arming “white” men of military age.

Yet, despite some of the ugly compromises that went into drafting the Constitution, such as its tolerance of slavery, the chief goal of the Framers was to create a framework for a democratic Republic that would enable the new nation to pass laws necessary for the country’s growth and success.

European monarchies were predicting that this experiment in self-governance would fail, so the likes of Washington and Madison wanted to show that Americans could govern themselves without resort to violence. The Framers stated as one of their top goals, “domestic Tranquility.”

The Framers also recognized the failure of the Articles and the need for a vibrant central government in a country as sprawling as the United States. The last thing they wanted was an armed population violently resisting the constitutionally elected government of the United States. Indeed, they declared such behavior to be “treason.” [See Consortiumnews.com’s “More Second Amendment Madness.”]

But today’s neo-Confederates and other right-wingers have spent vast sums of money distorting American history and deluding many Americans into believing that they must do whatever is necessary to “take back” their country from the likes of Barack Obama.

Any modest steps toward rational gun safety even provisions cleared by the conservative majority of the U.S. Supreme Court are deemed “tyranny” on par with the British Crown imposing its will on the Thirteen Colonies, which were denied representation in the British Parliament.

What is particularly dangerous about the Right’s hodgepodge of bad history is that with the nation’s first African-American president millions of whites are rushing to arm themselves while believing they have some duty to enforce the Constitution, without the foggiest idea of what the Framers were trying to do with it.

Not only is some of the right-wing rhetoric wildly hyperbolic comparing a twice-elected U.S. president seeking modest gun safety in the wake of a horrendous school massacre to an English monarch  but Rand Paul and many of his fellow Republicans don’t even bother to get their history straight.