Exclusive: The United States has been on a three-decade binge of unreality, imbibing delusions that began with Ronald Reagan and have continued through the Tea Party. The challenge now is for rational Americans to show they have the toughness and tenacity to fight for the real world — and to save it, writes Robert Parry.

The real struggle confronting the United States is not between the Right and the Left in any traditional sense, but between those who believe in reality and those who are entranced by unreality. It is a battle that is testing whether fact-based people have the same determination to fight for their real-world view as those who operate in a fact-free space do in defending their illusions.

These battle lines do relate somewhat to the Right/Left divide because today’s right-wing has embraced ideological propaganda as truth more aggressively and completely than those on the Left, though the Left (and the Center, too) are surely not immune from the practice of ignoring facts in pursuit of some useful agit-prop. 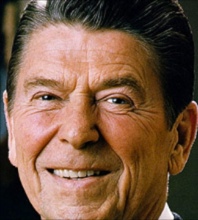 But key elements of the American Right have set up permanent residence in the world of make-believe, making any commonsense approach to the real-world challenges nearly politically impossible. The Right’s fantasists also have the passions of true-believers, like a cult that gets angrier the more its views are questioned.

So, it doesn’t matter that scientific evidence proves global warming is real; the deniers will insist the facts are simply a government ploy to impose “tyranny.” It doesn’t matter how many schoolchildren are slaughtered by semi-automatic assault rifles or what the real history of the Second Amendment was. To the gun fanatics, the Framers wanted armed rebellion against the non-violent political process they worked so hard to create.

On more narrow questions, it doesn’t matter whether President Barack Obama presents his short or long birth certificates, he must have somehow fabricated the Hawaiian state records to hide his Kenyan birth. Oh, yes, and Obama is “lazy” even though he may appear to an objective observer to be a multi-tasking workaholic.

The American Right’s collective departure from reality can be traced back decades, but clearly accelerated with the emergence of former actor Ronald Reagan on the national stage. Even his admirers acknowledge that Reagan had a strained relationship with facts, preferring to illustrate his points with distorted or apocryphal anecdotes.

Reagan’s detachment from reality extended from foreign policy to economics. As his rival for the 1980 Republican presidential nomination, George H.W. Bush famously labeled Reagan’s supply-side policies of massive tax cuts for the rich which would supposedly raise more revenues as “voodoo economics.”

But Bush, who knew better, then succumbed to Reagan’s political clout as he accepted Reagan’s vice presidential offer. In that way, the senior Bush would become a model for how other figures in the Establishment would pragmatically bend to Reagan’s casual disregard for reality.

The Reagan administration also built around the President a propaganda infrastructure that systematically punished politicians, citizens, journalists or anyone who dared challenge the fantasies. This private-public collaboration coordinating right-wing media with government disinformationists brought home to America the CIA’s strategy of “perception management” normally aimed at hostile populations.

Thus, the Nicaraguan Contras, who in reality were drug-connected terrorists roaming the countryside murdering, torturing and raping, became “the moral equivalent” of America’s Founding Fathers. To say otherwise marked you as a troublemaker who had to be “controversialized” and marginalized.

The remarkable success of Reagan’s propaganda was a lesson not lost on a young generation of Republican operatives and the emerging neoconservatives who held key jobs in Reagan’s Central American and public-diplomacy operations, the likes of Elliott Abrams and Robert Kagan. The neocons’ devotion to imperialism abroad seemed to motivate their growing disdain for empiricism at home. Facts didn’t matter; results did. [See Robert Parry’s Lost History.]

But this strategy wouldn’t have worked if not for gullible rank-and-file right-wingers who were manipulated by an endless series of false narratives. The Republican political pros manipulated the racial resentments of neo-Confederates, the religious zeal of fundamentalist Christians, and the free-market hero worship of Ayn Rand acolytes.

That these techniques succeeded in a political system that guaranteed freedom of speech and the press was not only a testament to the skills of Republican operatives like Lee Atwater and Karl Rove. It was an indictment of America’s timid Center and the nation’s ineffectual Left. Simply put, the Right fought harder for its fantasyland than the rest of America did for the real world.

There were a number of key turning points in this “info-war.” For instance, Reagan’s secret relationship with the Iranian mullahs was partly revealed in the Iran-Contra scandal, but its apparent origins in treacherous Republican activities during Campaign 1980 contacting Iran behind President Jimmy Carter’s back were swept under the rug by mainstream Democrats and the Washington press corps.

Similarly, evidence of Contra drug-trafficking and even CIA admissions about covering up and protecting those crimes were downplayed by the major newspapers, including the Washington Post and the New York Times. Ditto the work of Central American truth commissions exposing massive human rights violations that Reagan aided and abetted.

The fear of taking on the Reagan propaganda machine in any serious or consistent way was so great that nearly everyone looked to their careers or their personal pleasures. One side dug in for political warfare and the other, too often, favored trips to wine country.

As this anti-empiricism deepened over several decades, the remaining thinking people in America came to distrust the mainstream. The initials “MSM” standing for “mainstream media” became an expression of derision and contempt, not undeserved given the MSM’s repeated failure to fight for the truth.

National Democrats, too, showed little fight. When evidence of Republican misconduct was available as in the investigations of the early 1990s into Iran-Contra, Iraq-gate and the October Surprise case accommodating Democrats, such as Rep. Lee Hamilton and Sen. David Boren chose to look the other way. [See Robert Parry’s America’s Stolen Narrative.]

The Democrats even submitted when the Right and the Republicans overturned the electoral will of the American people, as happened in Election 2000 when George W. Bush stole the Florida election and thus the White House from Al Gore. [For details, see the book, Neck Deep.]

In the decades after the Vietnam War, the American Left also drifted into irrelevance. Indeed, it’s common in some circles on the Left to observe that “America has no Left.” But what was left of the Left often behaved like disgruntled fans in the bleachers booing everyone on the field, the bad guys who were doing terrible things as well as the not-so-bad guys who were doing the best they could under impossible conditions.

This post-modern United States may have reached its nadir with George W. Bush’s presidency. In 2002-03, patently false claims were made about Iraq’s WMD and virtually no one in a position of power had the courage to challenge the lies. Deceived by Bush and the neocons with the help of centrists like Colin Powell and the editors of the Washington Post the nation lurched off into an aggressive war of choice.

Sometimes, the Right’s contempt for reality was expressed openly. When author Ron Suskind interviewed members of the Bush administration in 2004, he encountered a withering contempt for people who refused to adjust to the new faith-based world.

Citing an unnamed senior aide to George W. Bush, Suskind wrote: “The aide said that guys like me were ‘in what we call the reality-based community,’ which he defined as people who ‘believe that solutions emerge from your judicious study of discernible reality.’ …

“‘That’s not the way the world really works anymore,’ he continued. ‘We’re an empire now, and when we act, we create our own reality. And while you’re studying that reality, judiciously, as you will, we’ll act again, creating other new realities, which you can study too, and that’s how things will sort out. We’re history’s actors and you, all of you, will be left to just study what we do.’”

Despite this imperial arrogance, real reality gradually reasserted itself, both in the bloody stalemate in Iraq and in the economic crises that Bush’s anti-regulatory and low-tax policies created at home. By Election 2008, the American people were awaking with a terrible hangover from a three-decade binge on anti-reality moonshine.

In that sense, the election of Barack Obama represented a potential turning point. However, the angry Right that Ronald Reagan had built and the corresponding crippling effects on the Center and the Left didn’t just disappear.

The Right counterattacked ferociously against the nation’s first African-American president, even intimating violent revolution if Obama acted on his electoral mandate; Obama often behaved like one of those accommodating Democrats (in retaining much of Bush’s national security team, for instance); the mainstream press remained careerist; and the Left demanded perfection regardless of the political difficulties.

This combination of dysfunction contributed to the rise of the Tea Party and the Republican congressional victories in 2010. But Election 2012, with Obama’s reelection and a general rejection of Tea Party fanaticism, has created the chance of a do-over for American rationalists.

Yet, if rational and pragmatic solutions are ever going to be applied to these problems, it is not just going to require that President Obama display more spine. The country is going to need its conscious inhabitants of the real world to stand up with at least the same determination as the deluded denizens of the made-up world.

Of course, this fight will be nasty and unpleasant. It will require resources, patience and toughness. But there is no other answer. Reality must be recovered and protected if the planet and the children are to be saved.

19 comments for “America’s War for Reality”