“Tough-guy-ism” toward Iran holds that only a “credible threat of war” will force Tehran to capitulate to Western demands on its nuclear program. But the real hold-up to a peaceful settlement may be Iran’s fear of “regime change” aggression if it makes too many one-sided concessions, ex-CIA analyst Paul R. Pillar says.

Among several broadly held misconceptions about Iran is that to get Iranians to make concessions we want them to make at the negotiating table the United States must credibly threaten to inflict dire harm on them, specifically, with military force, if they do not make the concessions.

Some in the United States (and some in Israel) who are especially keen on promoting this notion would welcome a war. If war preparations and brinksmanship used to communicate such a threat lead the two nations to stumble into an accidental war, and there is a real danger they might, so much the better from their point of view. 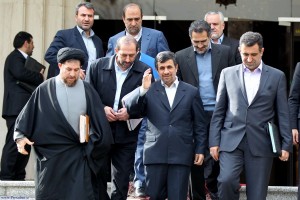 But the belief in saber-rattling as an aid to gaining an agreement in the negotiations over Iran’s nuclear program extends to many who actually want an agreement and are not seeking a war. We have heard more about this lately in connection with Chuck Hagel’s nomination to be Secretary of Defense.

People ask whether this nominee, who has evinced an appreciation of the huge downsides of a war with Iran, would be able to rattle the saber as convincingly as the same people think a Secretary of Defense ought to rattle it.

Even the usually thoughtful David Ignatius has adopted this line of thought. In his latest column he makes a comparison with nuclear deterrence in the time of Dwight Eisenhower. Under the doctrine of mutual assured destruction, a “bluff” of “frightening the Soviets with the danger of Armageddon” was used to dissuade them from overrunning Western Europe. “Obama,” says Ignatius, “has a similar challenge with Iran.”

No, he doesn’t. One situation was deterrence of what would have been one of the most epic acts of aggression in history. The other is an effort to compel a far lesser country to curtail or give up an avowedly peaceful program, and to do so by threatening what itself would be an act of aggression.

Thomas Schelling has taught us that deterrence and what he called compellence have significant differences, with the latter generally being harder to accomplish than the former. And this is in addition to all the other vast differences in scale, subject matter and morality between nuclear deterrence during the early Cold War and the current standoff with Iran.

These and other differences get to one of the problems with the common notion about threatening military attack in response to Iran not crying uncle at the conference table: a difficulty in making such a threat credible no matter how energetic a saber-rattler the Secretary of Defense might be.

At the more sophisticated level of policy analysis, if that analysis is done thoroughly and objectively, such a war would be seen to have enormous costs and disadvantages. One of those disadvantages would be, as members of the opposition in Iran have repeatedly warned, to strengthen politically Iranian hardliners whose position is based partly on implacable hostility from the United States and who would benefit from a rallying around the flag in response to foreign attack.

Another disadvantage would be the directly counterproductive one of leading the Iranians to make the decision they probably have not yet made, which is to build a nuclear weapon.

That last consideration is in turn related to another problem with the notion about threatening military attack, which concerns the reasons Iranians have for being interested in nuclear weapons. The chief reason almost certainly involves the presumed value of such weapons as a deterrent against major, regime-crushing foreign attack.

The more that the brandishing of the threat of military attack makes such an attack seem likely, the greater will be the Iranian interest in developing nuclear weapons and the less inclined they will be to make concessions that would preclude that possibility.

As if all of this were not enough to discard the notion about the efficacy of saber-rattling, there are the central realities of the nuclear negotiations themselves and how Tehran perceives them. Inducing the Iranians to concede is not just a matter of hurting them more. They already are hurting a lot, from the economic consequences of international sanctions.

What is missing from the negotiations is any reason for them to believe that the hurt will be eased if they make concessions. The P5+1 have yet to place on the table any proposal that includes any significant relief from sanctions. Without such an incentive, there is no reason for the Iranians to cry uncle or even to make lesser concessions, no matter how much more they are made to hurt.

The Iranians have good reason to be suspicious of ultimate U.S. and Western motivations, and threats of military force figure into that in an unhelpful way too. The Iranians do not have to look far to see ample evidence in favor of the proposition that the primary U.S. goal regarding Iran is regime change.

And they do not have to look far into the past to see a recent U.S. use of military force, participation in the intervention in Libya, that overthrew a Middle Eastern regime after it had reached an agreement with the United States to give up all its nuclear and other unconventional weapons programs.

What reason would Iranian leaders have to make any concessions if they believe the same thing is likely to happen to them? This is already a problem; rattling the saber only makes it worse.