Washington’s neocons came out with all their rhetorical guns blazing against Chuck Hagel as a prospective Defense Secretary, with Elliott Abrams even smearing the Nebraska Republican as “an anti-Semite.” But the old bullying for once has met some principled resistance, ex-CIA analyst Paul R. Pillar notes.

Chuck Hagel’s chances to become Secretary of Defense seem to be on the rise, with the biggest reason being the White House finally changing his status from prospective nominee to nominee, and as such getting fully behind him rather than holding him up as a balloon to be shot at.

Just as the implications of the entire saga surrounding this nomination include far more than who will head the Department of Defense, so too will the broader enduring effects be shaped by more than the outcome of the vote on the nomination in the Senate. They will be shaped by what come to be the common-knowledge perceptions of what has happened in this saga, which in turn will depend a lot on what is said and written about it over the next few weeks. 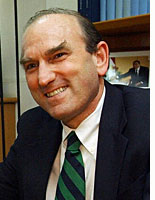 The broader effects to which I am referring are not just specific foreign policy directions during the second Obama term, although we can hope for, as Jacob Heilbrunn suggests, more engagement of the diplomatic type and less of the military variety.

Hagel will be a voice for reason and realism in policy discussions in the White House Situation Room, but as many others have pointed out, the Secretary of Defense is not the primary person responsible for making foreign policy.

Perhaps we should be encouraged at least as much about what the nomination says in general about Barack Obama as about having Chuck Hagel as one of his senior advisers. One might even say the nomination is one of the gutsier things Obama has done.

Maybe he chose Hagel mainly for the straightforward reasons that the President feels comfortable with him and their overall policy views seem compatible, with the nomination having nothing to do with an in-your-face approach to congressional Republicans or payback to Bibi Netanyahu. But still.

The effects I have in mind extend to favorable changes in political discourse and methods of operation in Washington that can last far beyond Obama’s second term. At least three aspects of what is said in the coming weeks will determine whether such effects prevail.

The first is largely up to the nominee, especially in what he says at his confirmation hearing. He needs to stay out of an apologetic or defensive mode. He should establish that most of the points of criticism against him are not mischaracterizations of what he said or did but instead are mistaken evaluations because what he said or did was right.

A second aspect is up to the commentariat and involves what becomes the accepted story of the political struggle that has been taking place over this nomination. Chapter One of the story was the initial floating of Hagel’s name. Chapter Two consisted of the Israel lobby, and especially the part of it that overlaps with hardcore neoconservatism, coming out hatchets in hand, trying to get Hagel’s scalp.

Chapter Three was unusually strong push-back from elements who were disgusted by what the protagonists in Chapter Two were doing and also admired Hagel. Chapter Four has been a retreat by central parts of the Israel lobby and especially AIPAC, who evidently realized that they might actually lose a fight against Hagel.

Faced with this prospect, it was to their advantage to say they “don’t take positions on nominations” or some such and thus to try to avoid looking like losers. They should not be allowed to write the story that way. If Hagel is confirmed, then let it be shouted from all the high places from Capitol Hill to K Street rooftops and beyond: the lobby lost.

The purpose would not be crowing but instead a lessening of the prospects for future intimidation, given how demonstrated success empowers intimidators and failure weakens them. A recognized failure might at least marginally reduce the lobby’s destructive power the next time it tries to kill a nomination or enforce omerta or something else.

A third aspect I have addressed earlier: the need to shame, repeatedly and consistently, those who have used smear tactics, another prominent example of which arose just this week.

It remains to be seen how good a Secretary of Defense Chuck Hagel will be, although he has the makings of a very good one. But other enduring aspects of the struggle over his nomination may prove to be at least as important as his performance in office

← The Grilling that Brennan Deserves
Reasons for Optimism →