Progress continues on the Keystone XL pipeline as it overcomes creative protests and legal challenges in East Texas. But opposition also is building with big-name environmentalists, like Robert Redford, urging the Obama administration to stand up against global warming, reports William Boardman.

Construction of the southern leg of TransCanada’s Keystone XL pipeline continues to march through East Texas toward the sea with the implacability of Sherman’s army through Georgia in 1864, although with less scorched earth and a lot fewer casualties (at least if one doesn’t factor in the future impact on global warming).

So far, the Canadian pipeline corporation has faced and overcome opposition all along the way from protesters, blockaders and court challenges and as of Jan. 4, TransCanada reported that the 485-mile construction projectwas roughly a third complete and pretty much on schedule for completion before the end of 2013. 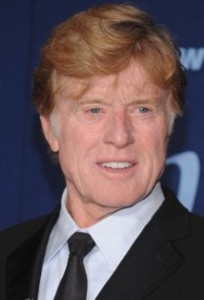 Despite setbacks as recently as Jan. 3, when a police-supervised cherry-picker collected a tree-sitter from the pipeline right-of-way, the Tar Sands Blockade and other opposition groups kept their actions going with a non-violence training camp over the weekend.

This led to the Tar Sands Blockade’s largest demonstration so far, on Jan. 7, when about 100 protesters occupied the lobby in the TransCanada office building. After about an hour, police cleared the building almost peacefully, with little more than some pushing and shoving. There were few arrests.

Most of the evicted demonstrators gathered in a greenspace across the street, where they performed street theatre featuring a “pipeline dragon,” as some 40 police looked on, some on horseback quietly drinking their Starbucks coffee.

A potentially much more important struggle goes on mostly out of sight in Washington, DC, where the Secretary of State is officially responsible for accurately assessing the environmental impact of the whole Keystone XL, all 1,100-plus miles of it.

This assessment was ordered almost a year ago, when President Obama resisted congressional pressure and denied the pipeline a permit to cross from Canada into the U.S. until the evaluation was done making the final decision a clear indicator of the President’s seriousness about climate change.

This was the subtext of environmentalist and moviemaker Robert Redford in a  recent piece that doesn’t mention President Obama by name, but calls in quietly measured tones for his government to deny the pipeline a permit:

“This is a time for climate leadership. So, instead of a shoddy Keystone XL environmental review, the first major climate action for this Administration’s second term should be to set limits on climate change pollution from power plants. That is the kind of action that makes sense.

The Alberta tar sands in Canada, like tar sands everywhere, do not contain oil, per se. The near-solid bitumen in tar sands can be turned into a high-sulfur content oil by treatment with toxic chemicals, heat and pressure.

The Keystone XL pipeline is designed to transport over 700,000 barrels of hot tar sands oil under pressure every day, from Canada across the heartland of the United States to Gulf Coast refineries, from whence it will mostly go to overseas markets, especially China.

In contrast to Redford’s polite demurrer, NASA scientist James Hansen has looked at the very same set of facts and concluded that Canadian tar sands “contain twice the amount of carbon dioxide emitted by global oil use in our entire history” and that exploitation of this “resource” would mean, effectively, “game over for the climate.”

Hansen was critical of President Obama for taking the attitude that the Canadians would exploit their tar sands no matter what the U.S. does. Redford suggests this may not be true, that “Canadians know better – they haven’t let new tar sands pipeline be built yet to either of their own coasts. In fact, the proposed Northern Gateway tar sands pipeline to the west coast is considered dead by many.”

With completion of Keystone XL, this point would become irrelevant. With Keystone blocked, it remains, at least, wishful thinking. There is already serious resistance in British Columbia and Nebraska and Vermont as well as Texas and other points along likely pipeline routes.

And resistance appears to continue to grow, as noted in CounterPunch in discussing the rise of Idle No More, a coalition of indigenous people in Canada in recent months, who are now joining the tar sands protest in Texas:

“In the coming days a new blockade will be set up in Texas as the resistance to Tar Sands grows. Plans are afoot across the country and the world for solidarity actions with Idle No More movement and direct actions targeting these industries and governments that continue to push our health, the environment and the existence of future generations aside for the profits of the transnational corporations defining the global political regime.

“Let’s hope that 2013 brings a needed awakening in the United States and that the Obama liberals and progressives shake off their shackles to a system that is plodding along in the wrong direction and decide to be Idle No More!!!”

The Lufkin Daily News posted a video of a non-violent but nevertheless odd arrest on Jan. 3 of a man asking for an explanation of why he had to move out of a public right of way. Tar Sands Blockade described the sheriff’s behavior this way: “Escalated police harassment of supporters along public highway continues. Angelina County sheriffs continue to push the limits of their legal authority with their harassment of supporters trying to observe the blockade from the side of a public highway. Supporters have been detained under the pretense that they were ‘witnesses to a felony investigation’ and ordered to produce ID.”

Later the group reported that six blockaders were being held in jail, with bail set at $10,000 each. To deal with one person of color who was arrested without ID, the sheriff’s department called immigration authorities.

← Where Rachel Maddow Dares Not Tread
The Grilling that Brennan Deserves →

4 comments for “Keystone Pipeline’s March to the Sea”