From the Archive: As the United States wrestles with the latest gun massacre this time aimed at Connecticut kindergarteners the real question is the character of American adults, many of whom punish gun-control advocates at the polls. Is America a nation of wildebeest, as Robert Parry asked after an earlier massacre.

By Robert Parry (Slightly edited from original publication on July 22, 2012)

Whenever some deranged gunman, armed with an assault rifle or some other highly lethal weapon, slaughters young Americans at a college or a high school or a mall or a movie theater (or now a grade school) I think of those documentaries showing Wildebeest on their migrations through crocodile-infested rivers.

In their frightened eyes, you can see that the herd knows that each crocodile will pick off an individual Wildebeest, flip it in the air, break its back and then drag it away to be devoured. But the herd still crashes through the river presumably with the understanding that most of them will survive. The Wildebeest may even be emotionally numbed to the fate of the unlucky ones. 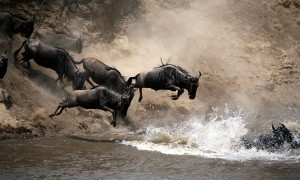 Wildebeest, plunging into a river while on migration.

In a way, that is what Americans have become. As we send our children off to school or off to a party or off to the movies, we know instinctively that some of them may well die at the hands of some troubled person who has obtained a powerful weapon and has decided to avenge some imagined slight by murdering strangers.

Sometimes, the dead are in large numbers (like at the Aurora, Colorado, multi-plex theater in July 2012 or in Newtown, Connecticut, on Friday), but usually it’s just one or two at a time. We just hope that it’s not our kids.

We weep over the tragedy of strangers, but our secret thought is thank goodness it wasn’t my son or daughter. We are like the Wildebeest continuing the migration hoping that at the next river it won’t be our turn.

At such moments, it’s also typical for news media pundits to wave their fingers at politicians for not having the “courage” to stop this mayhem by standing up to the ruthless National Rifle Association and its gun-obsessed fringe. But the harder truth is that the problem is not with America’s politicians; it’s with the American voters.

There have been politicians who have favored common-sense gun control, but most of them are now former politicians. Remember Michael Dukakis, the Democratic presidential nominee in 1988. He favored strong gun control, and his Republican rival, George H.W. Bush, clobbered him over the issue.

Bush accused Dukakis of wanting to disarm all private citizens. “That is not the American way,” declared Bush at one campaign rally. “I feel just the opposite.”

Some political observers believe that Dukakis’s brave stand for gun control was a key factor in his landslide defeat. And, today, Dukakis is a punch line synonymous with “loser” while Bush is revered by Official Washington, recently honored with a flattering documentary on HBO.

Bush and other pro-gun Republican presidents then packed the U.S. Supreme Court with like-minded justices who reversed longstanding precedents and reinterpreted the Second Amendment as an individual right to bear arms, rather than a communal need to have a “well-regulated Militia.”

There is merit to both sides of that argument. When the Second Amendment was adopted by the First Congress (and was then ratified in 1791), the young United States was a frontier nation where firearms also were important for hunting and for protection from such threats as outlaws, European rivals disputing America’s boundaries, and Native Americans resisting encroachment into their lands.

But the Founders’ real intent for the Second Amendment can be better understood from their actions in the Second Congress when the Militia Acts were passed, mandating that every white man of military age must purchase a musket and other equipment. Black men were excluded from this provision.

In those early decades, the Second Amendment also wasn’t regarded as a universal right. African-American slaves and even many free blacks were denied the right to own guns in Southern and border states under the so-called “Black Codes,” laws largely affirmed by the U.S. Supreme Court in the 1857 Dred Scott decision.

As the United States became more urban and even in some frontiers towns of the Wild West laws were passed to reduce violence by placing restrictions on guns. During the Prohibition Era, when gangsters began using machineguns, the federal government stepped in with legislation to restrict those dangerous weapons.

However, the political tide began to turn in the 1980s as a resurgent Right saw a potent issue championing broader “gun rights.” The National Rifle Association evolved from being mostly a gun club training young people in the safe use of firearms into a feared political lobby.

The 1988 election with George H.W. Bush portraying Michael Dukakis as an un-American weakling for favoring gun control marked a turning point in the national debate, but Dukakis was far from alone as a politician whose career ended ignominiously because he crossed the NRA.

By the early 1990s, the anti-gun-control lobby was drawing populist support from right-wing “militias” who saw the violent standoffs at Ruby Ridge and Waco as signs of a massive federal (even global) conspiracy to disarm Americans. Right-wing radio talkers and pols recognized guns as another wedge issue to divide the nation.

Advocates for “common-sense gun laws” soon were reeling, as the NRA punched loophole after loophole in gun restrictions. Pro-gun politics also merged with the Right’s larger strategy of undoing all kinds of federal regulations. In effect, the populist rhetoric of “gun rights” gave macho muscle to freeing Wall Street bankers to have the “freedom” to do whatever they wanted.

So, as the nation grieves the 12 dead moviegoers who were gunned down while watching the new Batman film in July (and now the 20 children among 27 dead in Newtown, Connecticut) as Aurora (and Newtown) take their places with Columbine, Virginia Tech, Tucson and other sites of infamous slaughters it’s almost tiresome to see the various players reprise their predictable parts.

We have politicians offering prayers; celebrities expressing shock via Twitter; gun lobbyists blaming the latest deranged individual, not his weapons; and, yes, sanctimonious pundits lamenting the lack of “courage” among politicians (though many of the same pundits join in snickering whenever the name “Dukakis” is mentioned).

We also have the latest group of grieving families with that stunned look of disbelief in their eyes. The rest of us will join the candle-burning vigils and tear up over the stories of young lives cut short. But privately we will thank goodness that the victims of this latest massacre (or the more numerous dead from the many daily examples of less-newsworthy gun violence) weren’t our own children.

We know in our gut that it is really only a matter of luck. We are like the Wildebeest on migration, plunging into a crocodile-infested river hoping that we and our loved ones emerge on the other side.

7 comments for “America: A Nation of Wildebeest”